This is the second of a series of posts from this weekend’s #Agreement20 conference in Manchester, an external antidote to the recollections and analysis of talks process insiders who will attend events organised by QUB and the British Council this week in Belfast.

One of the opening panels on Friday heard three papers that reflected on post-Agreement politics in NI. 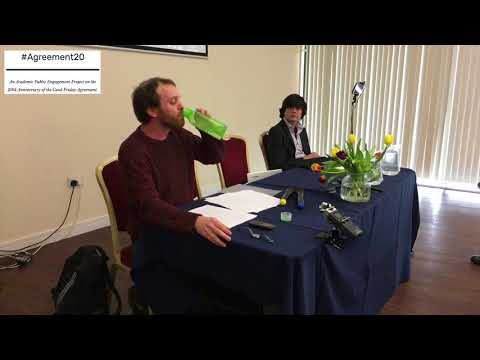 Dr Tommy Dolan (University of Edinburgh) spoke on the subject of “The rise, rise, rise of political consensus in Northern Ireland” and historians’ reticence to study consensus in NI.

Liz DeYoung (University of Liverpool) titled her paper “Red Herrings and White Elephants: the folly of post-Agreement political planning” with a particular focus on the regeneration of the Girdwood Army Barracks in north Belfast which is a “test case for putting the rhetoric of the Agreement into practice”. She described the compromise development of the Girdwood Community Hub as a ‘white elephant’ due to the “ethno-sectarian wrangling”. Yet she concluded that in NI’s political system “stalemate and stasis have now replaced this previous dynamic of trade-off and reluctant compromise that built Girdwood.” [starts 20 mins into the video]

Dr Martin Chung (Hong Kong Baptist University) delivered a paper “The Politics of Antagonism Revisited: Assessing the Good Friday Agreement (1998-2018) within the Framework of Political Reconciliation”. He suggested some intriguing parallels between Hong Kong and Northern Ireland (including the Umbrella Movement) and explained why it was challenging, yet important and rewarding to do comparative analysis of political situations around the world, in his case, between NI, post-war Germany and Hong Kong.