Register online to watch and listen to ‘Singing Struggle and Agreement’ tonight at 7.30pm as part of Belfast International Arts Festival. Slugger O’Toole has partnered with Spark Opera to stage the NI/ROI première of Clare Salters’ ‘Good Friday Agreement – p E A C E in 4/4 time’ alongside musical of struggle and a panel discussion looking back at the Belfast Agreement negotiations with Mark Devenport, Monica McWilliams and Kate Guelke.

With plans to form a Shared Island unit in the Taoiseach’s Office there will be opportunities for Dublin’s new coalition government to select a number of flagship projects that can form part of a transformative legacy. One that can contribute significantly to the re-imagination of our island is a trans-border university in the North West. The region could lead the way in both pedagogical and ecological innovation as we prepare to ‘Build Back Better’ to address the impacts of both …

John Hume chose to live with purpose. He was steadfast in his determination to see peace and a better life, not only for those from his own community, but for all people across the island of Ireland. Elected a Member of the European Parliament in 1979, he would go on to serve as MP for Foyle from 1983 to 2005, and member of the Legislative Assembly for the same constituency between 1998 and 2000. He defined future generations opportunities when …

Read more…John Hume: A Story Not Yet Fully Told

Yet another example of ignorance of Northern Ireland affairs in different parts of the UK government. Derry born Emma de Souza has won her three year battle to allow her American husband Jake to live with her, an Irish citizen in Northern Ireland, without having to renounce her birthright as a British citizen which she doesn’t want to exercise. She wants to bring him in under EU therefore Irish not UK immigration laws. Her victory is a triumph of principle …

Read more…Victory for the de Souzas and for Irish citizens’ immigration rights: a battle that should never have needed to be fought

As we drift through another week in lockdown, it’s hard to believe that there’s anything else to discuss apart from Coronavirus. Thankfully, Northern Ireland’s unique brand of identity politics stops for no pandemic. Cast your mind back to last year and the case of Emma De Souza. I wrote about it here. Mrs De Souza’s case concerns Article 1(vi) of the British-Irish Agreement. That section states that the two governments recognise the right of: ‘…..the people of Northern Ireland to …

SLUGGER EVENT. We’ve implemented it, ignored it and extended it, but never before in Northern Ireland has it been sung! But on the opening night of Imagine! Belfast Festival of Ideas & Politics, you can settle down in Accidental Theatre to hear singers from Spark Opera perform the local première of a choral setting of the Declaration of Support at the start of the Belfast (Good Friday) Agreement text, written by former NIO official Clare Salters. But don’t worry, we know that “singing the d’Hondt formula would just be weird”! Alongside the music will be a politician discussing what it was like to be inside the talks in Castle Buildings and as well as a journalist who anchored hours and hours of the rolling late-night TV coverage that accompanied the negotiations. An evening of nostalgia and reflection.

James Devlin is a postgraduate researcher at NUI Galway. The recent general election results were marked by the high positive swing to the Alliance party. Alliance were rewarded with one seat, came within 2000 votes of a second, and increased their share of the vote by approximately 10%, including in areas where they have previously struggled. In doing so, Alliance affirmed their performance in the recent European elections, confirming a general swing in Northern Ireland towards the centre, driven by …

Community planning provides a model that builds on the tradition of the “very strong community spirit that prevailed in Northern Ireland” during the Troubles, argues Aideen McGinley in the latest Forward Trust podcast.  McGinley is a trustee of Carnegie UK, co-chair of its embedding wellbeing project in Northern Ireland and a former senior civil servant. Aideen stresses that we need to be positive rather than fearful as we look to the future.  “The bottom line is that people do not …

Another day, another report into a united Ireland. This time Senator Mark Daly has published his findings on, ‘Unionist Concerns and fears of a United Ireland.’ The report is based on a recommendation given to the Joint Oireachtas Committee on the Implementation of the Good Friday Agreement. Daly’s research contains writings and submissions from unionist political figures such as Mike Nesbitt, Kyle Paisley and Trevor Ringland. Dr James Wilson, at the request of Senator Daly, also conducted focus groups with …

Read more…Unionist concerns and fears of a united Ireland: where are the women?

For Northern Ireland to become more integrated, there has to be a greater focus on integrated schools and integrated housing, argues the chief executive of the Integrated Education Fund, Tina Merron.  She was interviewed for the latest Forward Together podcast. “I think the majority of people in Northern Ireland want a shared future and a united community,” says Tina. “We need to give civil society more of a say. We need to encourage people to speak up and especially young …

International peace negotiator John McKinney has urged the political parties to include a stronger role for civic society in a reformed structure of governance for Northern Ireland.  John – a former chief executive of the Special EU Programmes Body and of Omagh District Council – was speaking in the latest Forward Together podcast. Asked how civil society in Northern Ireland should be strengthened, John says: “I don’t think we have a framework adequate to do it.  I think we had …

Northern Ireland is “a society that is still emerging from conflict”, warns Conal McFeely, chief executive of one of Northern Ireland’s largest and most successful not-for-profit businesses, the Ráth Mór Centre[i] in Derry.  He was interviewed in the latest Forward Together podcast. “We must collectively not allow ourselves to make the same political mistakes – and the failure of governance – that we’ve done in the past,” Conal says, before adding “but sadly I believe that we are at the moment”. …

Read more…‘Let’s not repeat the mistakes of the past! (But we are.)’

Society in Northern Ireland has gone backwards since the signing of the Good Friday Agreement, argues the former leader of the Progressive Unionist Party John Kyle, who is also a GP in Belfast. “In my view we have lost ground in the past 20 years,” he says in the latest Forward Together podcast. John believes that we need to review the progress that was achieved and consider why it has lost momentum.  He suggests three factors enabled the conflict to …

Read more…‘We have lost ground in the past 20 years’, claims PUP’s John Kyle

When did it become acceptable for a government to disregard its duty of care to its citizens? When did the every day abuse of power become normal? We have a government department that is often described as being “a law unto itself” and that is tolerated. Either through apathy, ignorance or acceptance. The “hostile environment” is well publicised, the staggering incompetence documented and regularly reported on. Yet instead of reform or a roll back we are seeing an expansion of …

Read more…A rights based society? How the UK Home Office is plummeting us into a rights disaster 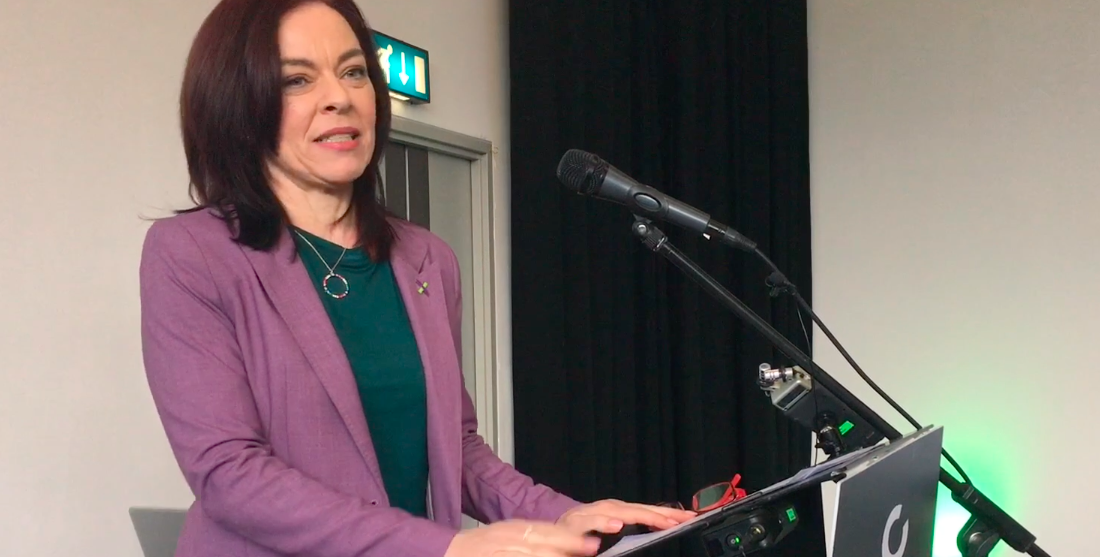 Northern Ireland has “had a political process at the cost of a peace process”, believes Clare Bailey MLA, the leader of the Green Party in Northern Ireland.  She is highly critical of the limited progress since the Good Friday Agreement 21 years ago and the lack of real social integration.  She was speaking in the latest Forward Together podcast. Clare questions who has benefited since the signing of the Good Friday Agreement.  “Certainly within the working class and the most …

Citizens’ assemblies should be widely used to address the problems faced by communities across Northern Ireland, argues Peter Sheridan, the chief executive of Co-operation Ireland. He was interviewed in the latest Forward Together podcast. “It works in Canada, it works in Iceland: there are examples all around the world.”  Speaking before the murder of Lyra McKee, Peter continues: “You pick an area and pick a problem, you randomly select a group of people from the electoral register and depending on …

Brice Dickson, normally a sober sounding academic lawyer and a former head of the NI Human Rights Commission  was first famous  for recanting on his recommendation for an  “all singing,  all dancing”  NI  Bill of Rights.  In the Newsletter today Brice has boldly entered the fray of the all party talks at Stormont to point out flaws in Sinn Fein’s starting position.   Sinn Fein has abused the concept of human rights by setting up such rights as pre-conditions for …

The first time I was referred to a ‘Child of the Peace’ was in Year 10 of secondary school. We were in form class with our teacher and it was  the lead up to Halloween. She was was reminding us to be vigilant of the boys in the neighbouring schools across the town who had developed a taste for throwing fireworks after school at the bus depot. After giving this announcement she muttered something along the lines of “This wouldn’t …

Read more…Children of the Ceasefire: Unity Amid Division

Perhaps the murder of a model for her generation will produce a paradigm shift in politics. Perhaps they’ll seize the emotion of the moment and strike a deal.   Had it not been for Lyra’s murder, the review of the GFA institutions would have been perfunctory.  Active British government involvement in the government of Northern Ireland had virtually ceased.  British- Irish relations were in cold storage over Brexit.  Vote harvesting is the season’s preoccupation as far as the eye can see, …

Senator Frances Black is an independent senator in Ireland’s Oireachtas and a member of its Good Friday Agreement Implementation Committee.  She has family roots in Rathlin Island and a strong commitment to addressing mental health challenges.  Frances is also a very modest person.  “I’m first and foremost a singer you know,” she says. “And I left school when I was very young. I don’t have a great language. But I do know that people understand the language of the heart.  …