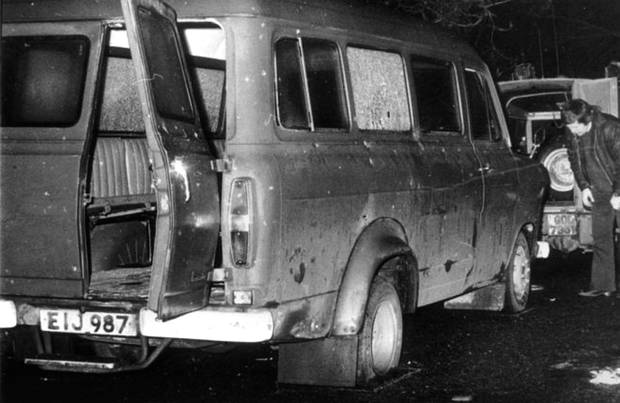 The Kingsmills inquest has been going on now for a couple of weeks. A new twist has, however, just been announced. Last week we were told that a finger print expert decided spontaneously to look again at a palm print on the get away vehicle and that a match had been found. It has now been claimed (unsurprisingly) that the palm print belongs to a well known republican. Little more surprisingly this republican is one who opposes the current Sinn Fein position. There were, however, at least eight gunmen and an unknown number of other accomplices.

Admit all the spin and claims it is worth remembering that Kingsmills was the sectarian murder of ten completely defenceless Protestant workmen. They were in a minibus along with two other men which was stopped by the IRA (though they have never admitted to the crime). The workmen tried to shelter the one Catholic workman Richard Hughes as they thought the terrorists were after him (there had been a number of sectarian murders of Catholics).

Mr. Hughes appears to have been recognised by one of the terrorists who singled him out and told him to run away (he was then chased and pushed into a field). Meanwhile the terrorists shot the remaining 11 men: miraculously one – Alan Black- survived despite being shot some 18 times.

Mr. Black’s testimony has been harrowing to listen to. He has described how the terrorists shot at the men’s waists. This did not kill the victims but prevented them running away Then they shot the men individually in the head. Mr Black recounted his apprentice Robert Chambers calling for his mother before a terrorist came over and shot him in the head.

The first witness to come upon the massacre described a scene of almost unimaginable horror. Mr. McKeown could not help anyone apart from pray with Mr. Black.

The IRA conducted a sectarian mass murder of the most horrific sort. The most comparable actions (whatever of Godwin’s Law) are those of the Einsatzgruppen.

Those murdered must never be forgotten. Whatever the ins and outs of the finding of the palm print it is vital that justice be served and even if only one of the murderers is sent to gaol that is to be welcomed. Just as welcome as the charging of loyalist terrorist Winston Rea with the murders of John Devine and John O’Hara. It seems that Mr. Rea may have incriminated himself with his Boston College interviews.

Whatever comes of these criminal investigations and proceedings justice for at least some of the murdered may yet come, though the centrality of innocence until proven guilty must never be forgotten. It is interesting that those calling for assorted amnesties and weasel worded equivalents have been pretty quiet on Kingsmills.

Finally to mark the names of the IRA victims of Kingsmills:

This author has not written a biography and will not be writing one.