The word ‘denizen’ conjures up the notion of a citizen, yet perhaps one with fewer rights or living somewhere that isn’t home.

It’s also the title of Dave Duggan’s new play, a courtroom drama written in verse which opens in the north west this weekend and will be performed in two courthouses.

The conceit in the play is that the judges have given Denizen an hour to speak to the court of public opinion. … [Denizen] is a dissident republican with a long tradition of being involved in militant anti-state activity, in the militant republican tradition, and he’s arrived at this point where he’s about to appear in court again. It’s not his first time.

In an unusual and gesture – only available in theatre! – the judges have given him an hour to step outside the confines of facing the judges into a public space in the courts to speak to the audience, the citizens.

He a fictional theatrical character and he interrogates himself, the guards interrogate him, and he presents his case, his past and present, and he pushes himself into the future with a set of options.

The playwright reckons “there’s a sense of singularity and isolation implied” in the word ‘Denizen’ and as an artist with a reputation for playing with words – who else could construct and use the word “de-chastellained”! – he admits that it trips off the tongue in a neat way: “denizen … dissident”.

I first came across Dave Duggan at last year’s Belfast Festival. His science-fictional play Makaronik wove together English, Irish and Empirish (TALK TALK UNDERSTAND MOST). This time, his play is in verse!

When I came to write this I had a sense that the matters that Denizen engages with and the gesture he makes, they are larger than life. To do it in a naturalistic style I felt wouldn’t carry it theatrically. So it’s in iambic pentameter, terza rima, ballad style, there’s singing in it, but it’s in verse.

One of the pleasures of theatre is relishing language. I like words … how we use them … the possibilities of them … the way they run into each other, infect each other, cross-pollinate with each other. Much of that is present in Denizen.

I speak in verse because my heart is pure.
My actions chill you daily, provoke fear.
But the verse, the beat, the pure note rises.
Let me tempt you with a few surprises.
…
Before you stands a local, wanted man.
But not by you. Not wanted. Abhorred?
As dog turds on a peace bridge are abhorred.
Avoided. Yuk! Walked round. Scraped off your shoe.
Do not bring me into your cosy home.
I am the pariah part of yourself.

Dave Duggan strongly believes that theatre is about “pleasure-making, engaging and entertaining”.

For me the pleasures of theatre, particularly in a world where so much of the images we get are on screens, laptops, phones, televisions, films … so the challenge to – and opportunity for – theatre makers is to do something that is consciously theatrical in a way that people think “this is something different … I’ve seen something refreshing and new”.

Why choose the subject of the last dissident republican?

The subjects tend to choose me. I’m soaking up what’s going on in my life and my world, matters arising and this matter arises for me. What is it about this choice of violence? Why do people choose violence to find a way to create social change?

The character Denizen says that “what he wants is regime change” and reflects on examples of regime change across the world as he explains his own actions at home.

Forced regime changes, and the lies, proceed
Daily, under cover of denials
Each night on broadcast news, across the globe.
So why not my desire for regime change?
By brute force, if that be necessary?
I am a midge on the sturdy white bull
Of war and violence. The state’s white bull,
Proud and fierce, calling us to give homage.

Ultimately, the play asks whether a future can be built without violence, by the state or its citizens?

Many people won’t have been in a court room unless on jury service. Dave Duggan describes the work as “site responsive” rather than “site specific” and he’s glad that years of discussion with Courts NI mean that audiences will get to see it in Bishop Street Courthouse and Strabane Courthouse.

Denizen is played by Diarmuid de Faoite (Corp agus Anam) while Orla Mulland (The Fall) and John Duddy (boxer turned actor) play the main guards. The rest of the chorus of guards who challenge Denizen are played by local actors. The Hive Studio provide the audio-visuals, allowing the audience to see the imagery in Denizen’s head.

The script has been published and there’s also a good piece on Culture Northern Ireland about the play.

Currently rehearsing in unit B15, Denizen is produced by Creggan Enterprises Limited in association with The Hive Studio and opens in Derry’s Ráth Mór Centre on Monday 30 and Tuesday 31 March (£5), before moving to Bishop Street Courthouse between Monday 6 and Wednesday 8 April (£10/£7) and Strabane Courthouse on Saturday 11 April (£10). Follow the links to the ticket sites. Derry tickets are also available from the Pennywise shop in the Ráth Mór Centre. 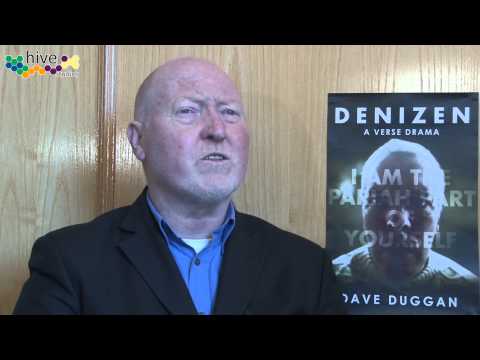