Awright, I’m not really sure to do with this, except to say this oddly narcissistic video from The Journal has gone somewhat viral… 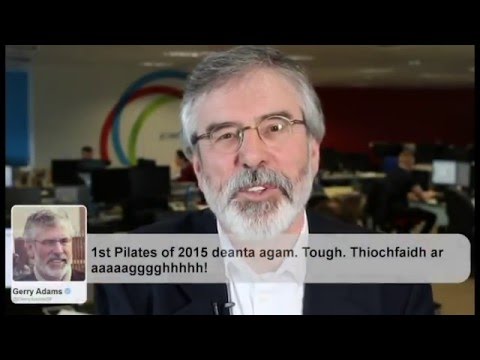 In lieu of any coherent response from me, here’s Henry McDonald with his take on the general phenomenon…

…like every other move Adams has made both inside and outside the republican movement, these tweets are carefully considered and released at strategic times.

Is it the height of cynicism to suggest that the headline-grabbing nude-man-and-dog bouncing act was tweeted at a time when his party was under fire for supporting a UK Treasury-imposed cost-cutting agenda in Northern Ireland?

So, when the media should have been posing questions on the dichotomy between Sinn Fein opposing spending cuts in the Republic, while simultaneously, alongside their partners in the DUP, imposing them in Northern Ireland, instead the Press and broadcasters were fixated on one nude man and his dog.

You might think that this alleged manipulation of Twitter is far too Machiavellian, but that is to misunderstood the ultimate Machiavelli of modern times.

Because, since coming to power within Sinn Fein following the hunger strikes and the entry of the party into electoral politics, Adams has been the master of manipulating news agendas, as well as steering the movement in directions no one ever expected it to go.

Aside from specific events and policies that might cause embarrassment for the party, the use of Twitter by Adams is a useful ongoing exercise in repackaging the Sinn Fein president.

In his tweets, he can portray himself as cuddly, mildly eccentric and that most cliched, over-played, exaggerated virtue of all in Irish life, good craic.

The tweets about rubber ducks, teddy bears and bouncing about in the nip with your grandchildren’s dog creates a soft focus and takes the edge of someone who, in the past, has had a truculent, wolfish public image.

The recalibration of Adams’ image is specifically designed to make the Sinn Fein president less threatening and more huggable to that critical segment of the southern Irish electorate known as “Middle Ireland”.

To which Anthony McIntyre had already added…

…even with having read McDonald’s piece there is a part of me that feels Adams does it because he can; a master of stretching human credulity, he is endlessly fascinated by the nonsense that people will say they believe. He has long discovered Karl Kraus’s “secret of the demagogue” which is “to make himself as stupid as his audience so that they believe they are as clever as he.”

He is conveying to the press the contempt with which he views it: throwing it a meagre morsel that will have it haring off digging up dog bones rather than the human bones Adams is more associated with in the public mind.

There is also the sense that he is taking the piss out of his own followers, to whom he has applied Frank Dane’s old witticism ‘get all the fools on your side and you can be elected to anything.’

They in turn will trip over themselves in the rush to get to the International Wall on Belfast’s Falls Road to hurriedly paint murals of the Great Trampolinist, only for some Lower Falls wit to come along in their wake and daub out the ‘olinist’ to cries of ‘heretic and blasphemer.’

Adams might not get an Oscar for his version of Dances With Wolves, but it is good acting nonetheless. And all the time the novelist John Banville’s “streak of sentimentality that marks the totalitarian mind” continues to be nurtured while the audience is busy watching the circus.