Legislators, staff and visitors drive around the statue of Edward Carson that stands in front of Parliament Buildings on their way to the car park, but how many of us know that much about the figure? 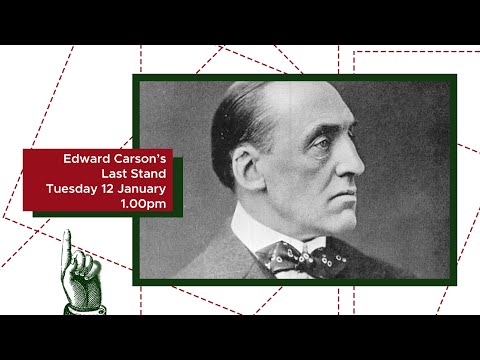 As an afternoon cultural treat, here’s the 50 minute play Edward Carson Reflects, written and performed by Paddy Scully as part of January’s Out To Lunch festival. It might fill in some gaps, looking at his education in Dublin, his work as a barrister (leading the Marquess of Queensberry’s defence against Oscar Wilde’s libel action) and his political activity in the period that introduced Home Rule, including being the first person to sign the Ulster Covenant.

The set up is that Carson is waiting to sit for his portrait in the London studio of Belfast-born painter Sir John Lavery. You’ll find lots more music, book readings, and even online magic in the Out To Lunch festival programme. You can also dip into shows from last week on their YouTube channel.

One quote that feels apt in 2021 as we wonder from where the next lettuce will arrive on a supermarket shelf:

“Nothing Ireland—north, south, east, and west—has suffered so much in its history as the broken pledges of British statesmen”

Disclaimer: I’m working on the digital delivery of the festival.