Using his passports as narrative devices, emeritus professor of politics at Ulster University, Arthur Aughey took this morning’s John Hewitt International Summer School audience on a journey around the borders of central and eastern Europe. 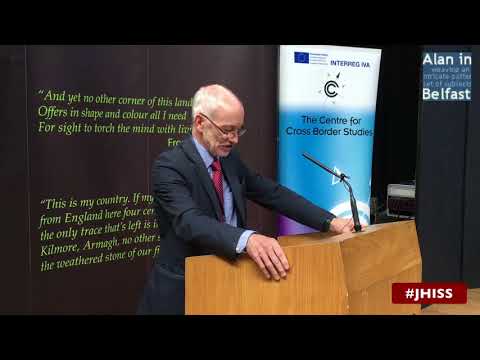 The overall theme for the 2018 summer school is “facing change: shifting borders and allegiances” and Aughey introduced his lecture with the word of John Hewitt’s poem: The Frontier.

One of my favourite Hewitt poems is being used to open this mornings talk @The_JHS Summer School, given by Professor Arthur Aughey. pic.twitter.com/hFny1De8LM

Aughey’s delivery of the Centre for Cross-border Studies’ annual lecture in Armagh explored themes of language, identity, migration and referenced authors like Hugo von Hofmannsthal, Joseph Roth, Stefan Zweig and Claudio Magris who touched upon Austria and its neighbours, countries that Aughey visited and studied during his career.