This is the fourth in a series of posts from this weekend’s #Agreement20 conference in Manchester, an external antidote to the recollections and analysis of talks process insiders who will attend events organised by QUB and the British Council this week in Belfast.

Attendees at one of three parallel panel sessions on Saturday afternoon heard three papers that were bunched under the title of Dealing with the Past (and the Present). 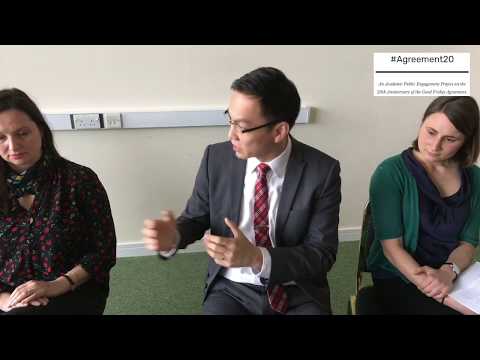 Professor Sara Dybris McQuaid (Aarhus University, Denmark) delivered a paper titled “Nothing is agreed until everything is agreed: institutionalising radical disagreement and dealing with the past in Northern Ireland”.

“In negotiation literature, ‘nothing is agreed until everything is agreed’ is meant to be this creative platform where you can air any crazy idea you have and they’re not binding until you agree that they are binding. However, often in negotiations, certainly in Northern Ireland, it becomes this mutual construction and deconstruction talks [where] you add all your issues to whatever package to have it agreed and this is what has happened to dealing with the past where welfare reform has been attached.”

Dr Katie Markham (Newcastle University) looked at “sick jokes and gallows humour in troubles tourism”. [28 mins from start of video] With a literary context the “intersection between comedy and conflict has been well-observed” but while she acknowledged that the 2012 Belfast Comedy Festival programme included a seminar on comedy and conflict in NI, the trope was understudied. Her fieldwork in Belfast shows comedic reflections on the past that emerged from touring paramilitary museums and analysing the commentary given on mural tours where “humour seemed to interact with wider concerns I had around empathy in quite intriguing ways”.

“As the sharp wit found in shows like Derry Girls reminds us, the craic is indeed mighty when it comes to articulating more life-like representations of the Troubles, it is also undeniably a might that needs treating with care.”

Finally, in a talk titled “Resolution is Possible”, Adam Brodie (University of Oxford) explained the ins and outs of negotiations and initiatives that led to the end of the long-running “and arguably most contentious since Drumcree” Crumlin Road parades dispute. [50 mins from start of video]

He worked through the stages of conflict management (2006-2009), the rise of dissidents (2009), stasis (2010-2013), the Twaddell protests (2013-2016) and the tragic circumstances that led to a breakthrough. He concluded by listing some factors that seem to be necessary in order to resolve seemingly intractable disputes.