This is the first of a series of posts from this weekend’s #Agreement20 conference in Manchester, an external antidote to the recollections and analysis of talks process insiders who will attend events organised by QUB and the British Council this week in Belfast.

Delivering a keynote address, Professor Thomas Hennessey (Modern British and Irish History, Canterbury Christ Church University) suggested to gathered delegates that they “needed to take a long view” on how the Good Friday Agreement came about in 1998. 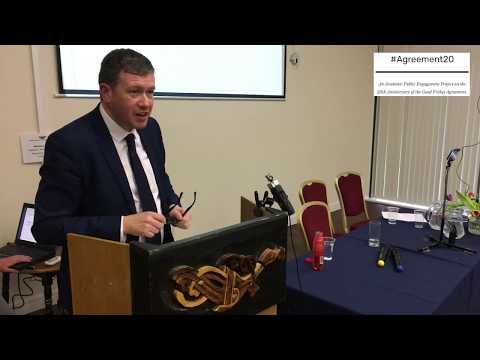 The co-author of The Democratic Unionist Party: From Protest to Power debunked a series of theories other academics have proposed over the last 20 years to explain the Agreement and also disagreed with the notion that the GFA was “Sunningdale for Slow Learners”.

“I would argue that agreement collapsed in 1973 and survived in 1998 is because the two agreements in key areas are fundamentally different despite the superficial analogy.”

His politically nerdy address looked at the bottom lines of the different parties and governments involved in the negotiations that led up to 1998, and delved into the significance of the three-stranded approach, including Trimble’s “pet hobby horse of a Council of the Isles”.

#Agreement20 was convened by Dr Caroline Magennis (University of Salford), Dr Maggie Scull (King’s College London) and Dr George Legg (King’s College London). Open-access peer-reviewed articles associated with the conference will be published in the #Agreement20 special collection at the Open Library of Humanities. Filming of the conference sessions was made possible through support from the Irish Department of Foreign Affairs and Trade.