As I watched the Nolan show last night, my heart went out to Linda Ervine – a courageous woman pitted against an all male panel and an audience full, it seemed, of antagonistic loyalists who appeared fearful of an Irish language act and what they thought it might do to their identity. 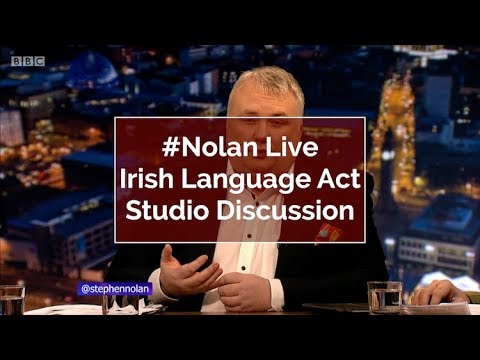 It reminded me of the famous Seán Ó Riordáin poem which contained the lines:

There was little chance of that, it seemed, on the Nolan Show.

Earlier yesterday, I was at a great lecture by Eamon Phoenix on the topic of the Presbyterians and the Irish Language in which he spoke about people whose unionism was just as strong as their Irish/Gaelic identity. Eamon referred to a woman who in the same couple of days had tea with Sir Edward Carson, attended a unionist meeting to discuss the Covenant and went to an Irish class.

Let’s not dwell on what was said in that very distressing programme except to pick up one thread with a view to seeing whether we can see a way forward from this critical juncture. David Campbell spoke about what was agreed in the Good Friday Agreement/Belfast Agreement, suggesting that that should be enough. As an Irish speaker, I regard it as a useful starting point as it definitely saw the dawning of a new era of optimism which filled us with hope of what could be achieved. The GFA contained various pledges regarding the Irish language, including:

4. In the context of active consideration currently being given to the UK signing the Council of Europe Charter for Regional or Minority Languages, the British Government will in particular in relation to the Irish language, where appropriate and where people so desire it: • take resolute action to promote the language;

And what followed was a list of commitments which were to be delivered on across the spheres of broadcasting, education, visibility of Irish in public life etc.

So let’s rewind to the European Charter for Regional and Minority Languages which was ratified with respect to Irish (part 3 of the Charter) and Ulster Scots (part 2). The British Government signed up to 27 provisions in the Charter with respect to the Irish language, with respect to provision in terms of education, local government, the courts, broadcasting and media, social matters as well as culture. The British government selected the weakest provisions, some of which were already being delivered, to implement. It’s easy to see why: it would have been an easy win.

However only one of the 27 provisions is considered to have been implemented in full – and even that, in the realm of broadcasting, came with a caveat that a more sustainable means of funding Irish medium broadcasting needed to be resourced and put in place. Many of the provisions have been ‘partly fulfilled’ and five of the 27 are considered not to have been fulfilled at all. I have scanned the last Committee of Experts report which was issued in 2013 and if you follow this link you will be able to read what provisions adapted by the UK in respect of Irish have been fulfilled, partly fulfilled or not at all.

What you will most notice if you read the full report is how much progress has been made beyond the baseline in Scotland and Wales and how far off the baseline we are here in Northern Ireland.

A challenge was issued by Linda Ervine on the Nolan Show for unionists to come up with an alternative Irish language act to that proposed by Sinn Féin. Why not start with giving legislative force to what’s already agreed? That’s the Charter. Let me be clear, I see this as a milestone on a journey not the end of a journey and this is being proposed by me – and I represent no-one – in the hope that it moves the discussion forward.