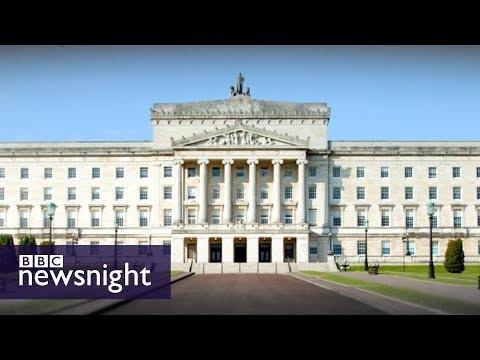 Cue Arlene saying it is all over, “in our view, there is no current prospect of these discussions leading to an executive being formed”. Her Majesty’s government, “to set a budget and start making policy decisions about our schools, hospitals and infrastructure”.

As the UUP leader pointedly noted Tuesday, the no deal came after 402 days of deadlock. From what I can figure, the idea for three interlocking acts came from a senior civil servant, possibly the same one who decided to call the British PM and (at very late notice, it seems) the Taoiseach before the DUP had had time to share the idea with their officers never mind the wider parliamentary parties.

As you can hear from the pledge made by Arlene Foster that there would be no Irish Langauge Act, had it carried through, that would have been political suicide for the DUP. Questions are now being asked internally of Simon Hamilton the most senior of the negotiating team, but there are also questions to be asked about why the party appeaqrs not to have even had a contact group for them to report to.

However close the DUP negotiation team thought they were to a deal, it hadn’t passed muster by the time it got back to the officer team never mind the wider party (almost all of whom had been kept in the dark throughout negotiations).

By the time it had come into headquarters, the DUP signalled to the British PM’s office that it would not be worth her while coming over. Regardless of that, Mrs May came, and insisted on Leo coming too only to see the deal crumble before their very eyes.

It begs huge questions about the amount of time a resources being put into this issue by both governments. Brian is right argue that direct rule must mean much closer co-operation between the two governments, not in order to make the arrangements greener, but so that someone has a grip on the drift in Northern Irish relationships.

I think going back to David Cameron and Enda Kenny’s time in office I think there was a bit of the foot off the pedal.

There was a view it should be left to the parties in Northern Ireland, but we now know from bitter experience that the dysfunctional relationship between the parties in In the north, particularly between Sinn Fein and the DUP, would not produce the results that are required.

We do need to maintain the broad sets of relationships between the British and Irish governments, between all parties in the north to nurse and sustain the institutions to were created by the Good Friday Agreement over 20 years ago.

He went on to note:

Momentum has gone out of the north south dimension to the Good Friday agreement, for example. And I think if you look at my happened this week and the both the Prime Minister and the Taoiseach going up on Monday advertising the fact the deal was done as the basis for their visit, I think all of that suggests to me a bit of inexperience and probably not considering the import of their actions early enough. The relationship between the two governments hasn’t been everything it should have been.

That’s the understatement of the year. What’s eluding most observers is that this crisis was not triggered by the Irish language. But not Martin…

That tells its own story in terms of the narrative. In my view, should never have been collapsed in the first instance. It’s easier to collapse something than to bring it back together again. And we’re now learning the bitter lessons of that.

It seems it was the DUP that crashed this these arrangements. The excessive secrecy is odd: it’s thought that even the composition of the negotiation teams were not known to some MLAs. Not least because as Newton Emerson points out the rumours of internal fracturing are mostly a umyth put out around journalists by SF rather than the internal realities of the party. Someone there needs to take a good long hard look at themselves in the mirror.

Of course SF are using the Irish language as a weapon. But it is the drift from RHI to language shows more that shows how ruinous the lack of adult supervision can be. You cannot build in a vacuum.

What ought to give everyone pause thought, is that contrary to Simon Coveney’s assertions that no one wants direct rule by the British, it is the only universally popular option. So much for SF’s promise to keep power on the island of Ireland.