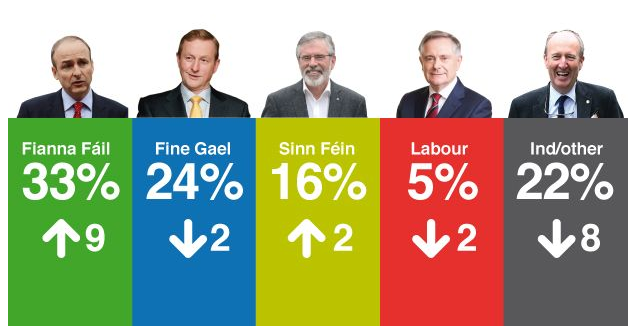 One of the worse refractions of political light, as it comes across the border from the south to the north, is the illusion that somehow the southern electorate share the same obsessions and political outlook as those of us in Northern Ireland.

For many northerners, southern politics did not really exist before the Sinn Fein expeditionary force began to should some fruit for it’s long and patient endeavour to seize power on both sides of the border.

Accordingly, we tend to view the politics of the Republic through the prism of how well or how badly Sinn Fein is doing at any one time: in the process, reducing the other major parties there to the status of bit part players.

So according to many northern originating accounts, Fianna Fail’s biggest threat was the (‘inevitable’) rise of Sinn Fein. That’s certainly the eventuality that Sinn Fein had planned for them in the wake of the 2009 local elections in the south, which first revealed FF’s weak underbelly out in the wider country. But if you had talked to anyone in Fianna Fail at the time, Sinn Fein was a poor third or fourth on the list of battles to be won. Regaining the trust of their own voters, scalded by the violence of the downturn and suffering trust issues that were off the scale.

It was this group who absconded with the Independents. And this distrust ran so deep it was not simply Fianna Fail, but Dublin itself that was seen as the enemy. So far as party strategists were concerned, those who had gone to FG and or Sinn Fein could wait.

Today’s poll in the Irish Times seems to confirm – post the election – that the elevation of some of those independents to power, and a parallel move of Fianna Fail to the most potent position of any Opposition party in several generations has prompted a return of sentiment, if not yet votes.

What’s striking is that there is almost no other dynamic apparent in the poll. As I note in today’s SluggerReport, there is little or no significance in a change of +/- 2%.  It leaves FF a long way off the 40% + it would need to return to its previous dominance. But it’s an early indication Martin’s strategy is going down well with former voters.

But it’s an early unambiguous indication that Martin’s strategy is going down well with former voters. If this is a return to something like a preference for a centre ground position after Ireland’s long flirtation with political chaos, it may be instructive for others struggling around Europe.