We are richer as people when we not only know a view point but can appreciate it.

Dave Thompson is a teacher, runner, Presbyterian elder and SDLP member (who self-identifies as not being very nationalist). He delivered an hour long lecture that unpicked various perspectives on the 1916 Proclamation.

The universal republican ideals – equality, liberty, fraternity – those are things we still care about in the 21st century, and things we’ll still be doing in the 22nd century. So in that light we should be able to look at the Proclamation and find something for everybody.

Developing a wider societal appreciation of the Proclamation is likely to be hampered by “unionist ideals [that] are undergoing some re-examination”.

Unionism has always been wary about the ‘dominant’ country in the union, be it Labour or Tory led … And now the second nation in that pecking order is re-examining the boundaries in that union. Add to that Empire and Colonialism … and the argument that if Ireland received Home Rule the Empire would inevitably be threatened.

Will those commemorating the Proclamation be “patient and generous in its telling”?

If you’ve a strong identification with the Proclamation or the Covenant then you can see something of yourself in the other document.

Jim Allister’s comments on a Spotlight panel discussion about a “some foreign old grubby rebellion” were examined. 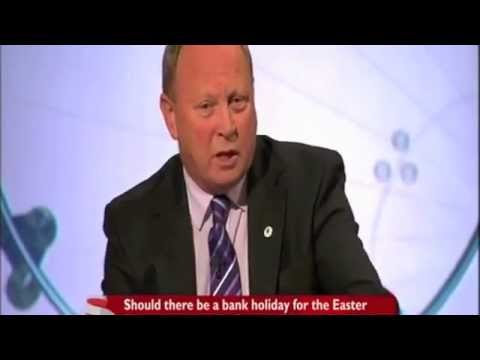 Dave quoted a phrase from Nuala O’Loan on Sunday at Corrymeela that “we still don’t … understand that we’re not a threat to each other”.

Drawing to a close, Dave posed the question:

Ask what the past is giving to the present.

What will a Proclamation parade through Belfast in 2016 look like? A republican version of the Twelfth? Hooded faces and shots fired in the air? Or something that non-republicans would want to attend? How will the commemoration be informed by the historical complexity.

15 March 2016 has been designated ‘Proclamation Day’ and school pupils will have the opportunity to write their own Proclamation. Perhaps that’s an opportunity everyone should take.

In Dave’s mind, there’s space in the Proclamation “for republicans and the prods as well”.