On Friday afternoon [GMT], ahead of Ireland cricketers’ epic encounter with Zimbabwe, Nasa’s Dawn spacecraft became the first man-made object to go into orbit around a dwarf planet – Ceres, at 950km across, the largest object in the main asteroid belt. [Image credit: NASA/JPL-Caltech/UCLA/MPS/DLR/IDA]

From the associated text

The slim crescent of Ceres smiles back as the dwarf planet awaits the arrival of an emissary from Earth. This image was taken by NASA’s Dawn spacecraft on March 1, 2015, just a few days before the mission achieved orbit around the previously unexplored world. Following the image sequence in which this view was acquired, the Dawn spacecraft slipped over to the dark side — that is, the far side of Ceres with respect to the sun. The spacecraft is slated to resume imaging of Ceres’ surface in mid-April, when it once again views lit terrain on Ceres. The image was obtained at a distance of about 30,000 miles (about 48,000 kilometers) at a sun-Ceres-spacecraft angle, or phase angle, of 123 degrees. Image scale on Ceres is 1.9 miles (2.9 kilometers) per pixel.

Last seen, on Slugger, leaving orbit around 530km-wide proto-planet Vesta – the second most massive object in the main asteroid belt – Dawn has been travelling for 7.5 years and will spend over a year mapping and sensing the dwarf planet, Ceres.  From the BBC’s Spaceman Jonathan Amos

Over the next month, controllers will re-shape the orbit to get it ready to begin the prime science phase in late April.

Over time, the intention is to progressively lower the orbit until the probe is just a few hundred km above the surface. By that stage, it will be returning very high resolution pictures.

“We have much to do over the next year and a half, but we are now on station with ample reserves, and a robust plan to obtain our science objectives.”

Via the BBC spaceman, again

…deputy project scientist Dr Carol Raymond cautioned that the resolution of Dawn’s imagery was not good enough at the moment to make any definitive statements.

“These spots were extremely surprising and they have been puzzling to everyone who has seen them,” the Nasa Jet Propulsion Laboratory researcher told reporters.

“They show up in a 92km-wide crater that’s about 19 degrees North latitude. The spot in the centre is about twice as bright as the spot on the side of the crater, and as yet it has not been resolved, meaning it is smaller than the 4km pixel size [of the images].

“But its apparent brightness is already off-scale; it’s consistent with high reflective materials.”

Intriguingly, the European Space Agency’s Herschel telescope reported last year seeing water vapour coming from two sectors on Ceres. One of these sectors includes the location of the spots. That could be very significant, Dr Raymond said.

“The association with the impact crater may indicate that impact heating resulted in exposure of underlying ice [and] its vaporisation; and perhaps we’re seeing a deposit left behind which is rich in material like salts.”

And, from the Dawn blog on the day of the encounter, here’s an animated gif of Dawn’s observation of a full rotation of Ceres.  [Image credit: NASA/JPL-Caltech/UCLA/MPS/DLR/IDA]

From the associated text.

Dawn observed Ceres for a full rotation of the dwarf planet, which lasts about nine hours. The photos were taken on Feb. 19 from a distance of about 28,000 miles (46,000 kilometers). A single mosaic made from the individual pictures is below. The imaging session was known as RC2. 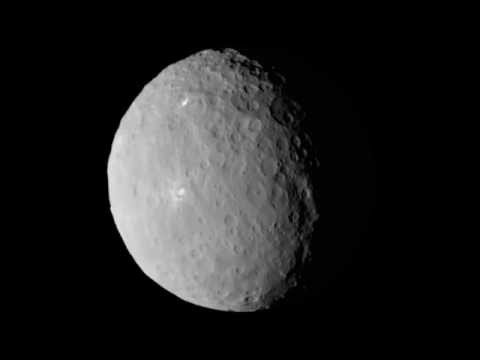 And in tribute to actor and director, Leonard Nimoy, who died in February, Nasa re-published this short video he narrated in 2007, on the Dawn mission to the asteroid belt. 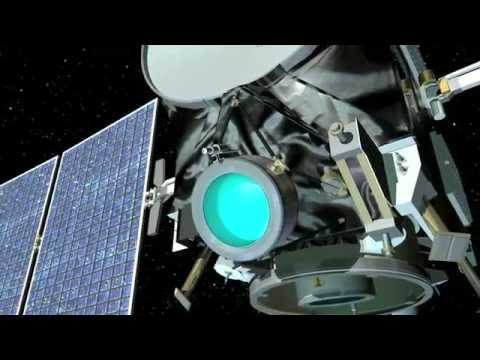 Finally, a reminder that later this year, in July, Nasa’s New Horizons probe will reach its primary objective, after a ten year journey – and undergo a high-speed fly-past of the increasingly complex system around rather better known dwarf planet, Pluto. [Honk! – Ed].