Not that it didn’t already have five moons.  At least.  ANYhoo…  As I was saying this time last year, when Hubble spotted a fourth moon orbiting Pluto.  The Hubble Space Telescope has been looking at the twin dwarf planet system of Pluto and Charon ahead of Nasa’s New Horizons mission expected arrival in the neighbourhood in 2015.  [Image credit: NASA, ESA, and M. Showalter (SETI Institute)]

They’ve already mapped the surface of Pluto, to an extent, and now they’ve spotted a fifth moon in the system– if you count the dwarf planet Charon as a moon of Pluto, that is.

As the Hubblesite news release notes

A team of astronomers using NASA’s Hubble Space Telescope is reporting the discovery of another moon orbiting the icy dwarf planet Pluto. The moon is estimated to be irregular in shape and 6 to 15 miles across. It is in a 58,000-mile-diameter circular orbit around Pluto that is assumed to be co-planar with the other satellites in the system. Provisionally designated S/2012 (134340) 1, the latest moon was detected in nine separate sets of images taken by Hubble’s Wide Field Camera 3 on June 26, 27, and 29, 2012 and July 7 and 9, 2012. This discovery increases the number of known moons orbiting Pluto to five. 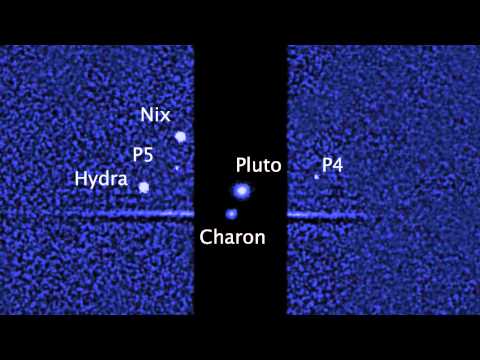 This video shows the motion of Pluto’s five satellites as photographed by the Hubble Space Telescope on July 7, 2012. The three-exposure-time-lapse sequence spans a total of 4.5 hours. The images were taken with Hubble’s Wide Field Camera 3 in visible light.

And a couple of key quotes from the HubbleSite news release

The Pluto team is intrigued that such a small planet can have such a complex collection of satellites. The new discovery provides additional clues for unraveling how the Pluto system formed and evolved. The favored theory is that all the moons are relics of a collision between Pluto and another large Kuiper belt object billions of years ago.

The new detection will help scientists navigate NASA’s New Horizons spacecraft through the Pluto system in 2015, when it makes an historic and long-awaited high-speed flyby of the distant world.

The team is using Hubble’s powerful vision to scour the Pluto system to uncover potential hazards to the New Horizons spacecraft. Moving past the dwarf planet at a speed of 30,000 miles per hour, New Horizons could be destroyed in a collision with even a BB-shot-size piece of orbital debris.

“The discovery of so many small moons indirectly tells us that there must be lots of small particles lurking unseen in the Pluto system,” said Harold Weaver of the Johns Hopkins University Applied Physics Laboratory in Laurel, Md.

“The inventory of the Pluto system we’re taking now with Hubble will help the New Horizons team design a safer trajectory for the spacecraft,” added Alan Stern of the Southwest Research Institute in Boulder, Colo., the mission’s principal investigator.

How many known, and unknown, moons Pluto will have when they arrive in July 2015 remains a known unknown.

And here’s a short, if now somewhat out-of-date, Science at Nasa report on the New Horizons mission. 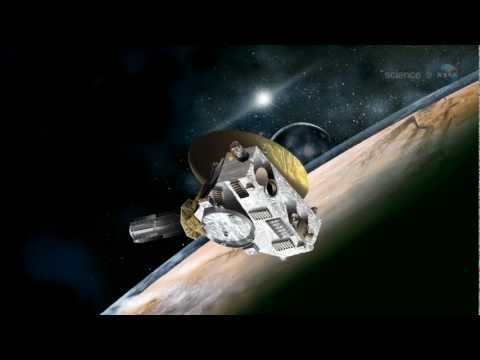