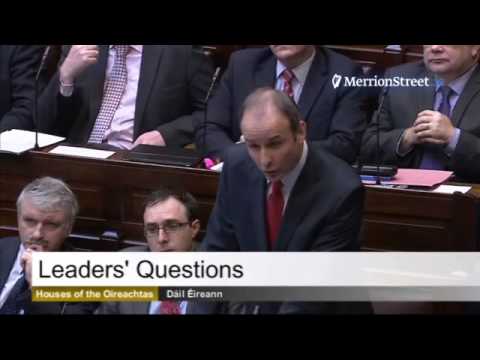 Yesterday’s leaders questions was once of those explosive occasions when you don’t quite get the extent of it at the time its happening. It’s clear from today’s front pages that Micheál Martin’s virtual bomb yesterday was well placed.

Deputy Micheál Martin: Last week I read elements of the transcript of a conversation between the Garda confidential recipient, Mr. Oliver Connolly, and a Garda whistleblower, Mr. Maurice McCabe, such as how, if the Minister for Justice and Equality, Deputy Alan Shatter, felt the whistleblower was going to screw him, he would be finished. In addition, it was said that if complaints were exposed to the print media, it would make him an angry man and so on. The elements of the conversation were quite shocking in terms of their import. The confidential recipient also spoke about his close proximity to “Alan” and how he communicated with him on the allegations the whistleblower had put before him. I have since listened to the audiotape of that conversation and can confirm its existence. Every single syllable I articulated last week is on it and, obviously, more. It reveals the frustration of the whistleblower and also the desire of the confidential recipient that at all costs this must not get into the print media, that it must be kept out of the media.

I subsequently met the whistleblower, Mr. Maurice McCabe, and must say he is a credible man. He has some story to tell, but the Minister for Justice and Equality, essentially, has not allowed him to tell it. I have met others, people who have been in authority, who equally believe in this man’s credibility. He did everything by the book, the whole way, as a whistleblower. He went to line management and was rebuffed. He went to the confidential recipient and got nowhere. He wrote repeatedly to the Taoiseach for over 12 months and gave his office a dossier with all of his allegations backed up by evidence. He went to the Department of Justice and Equality, but he got no response of any consequence. He initially went to the Department of Transport which sent it to the Department of Justice and Equality. He also went to the Road Safety Authority where he got a good response. The Taoiseach should speak to the Minister for Transport, Tourism and Sport, Deputy Leo Varadkar, who did stand his ground. Maybe people should listen to him more in the Cabinet than to the Minister for Justice and Equality.

The bottom line is that when the inquiry into the penalty points saga was initiated, it was extraordinary that Assistant Garda Commissioner O’Mahony and the inquiry team did not actually interview Mr. Maurice McCabe, the man who had made the original accusations. Incredibly, the Minister, Deputy Alan Shatter, told the Dáil last October that the whistleblower had not co-operated with the inquiry. That was a blatant untruth. The person who chaired the inquiry has since confirmed that he did not interview the whistleblower.

What has occurred is absolutely scandalous. It is not just about penalty points, it is also about other serious issues that would make one’s hair stand on end. They are shocking revelations of incompetence which ultimately led to people being murdered as a result of a failure to act. It is very serious stuff which the Department of Justice and Equality has had for quite a long time but not acted on.