Watching Nolan on Wednesday night was a fascinating experience (of which more later). A couple of our regular bloggers were in the audience. Of all the moments, this from Chris probably took the lion’s share of positive comment on Twitter: 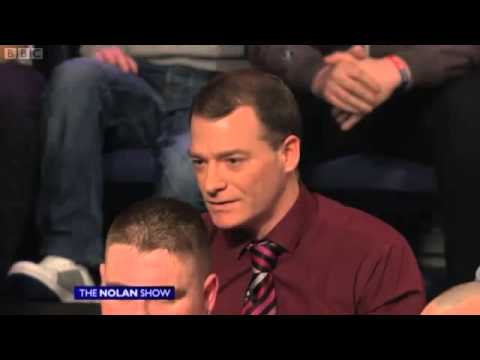 He makes an important point, when he recounts the number of unionist councils which refuse to rotate the chair in council. Simply put, it is an open goal waiting to scored anytime power sharing comes up.

What unionists miss, and it suggests to me that they’re not talking to their colleagues out west, is that a nationalist chair in a majority unionist council has absolutely no power whatsoever.

There have been unionist chairs in Omagh and Newry Councils both places where siting of memorials that might considered offensive to minority unionist populations were given official council recognition.

Indeed, regular commenter Nevin noted on Facebook this morning that Moyle Council’s meeting on Monday night was punctuated with some pretty foul language and accusations regarding the flag protest in Belfast.

So Jeffrey Donaldson was right to point out that rotating figure head chairs is little more than a cover for majoritarian nationalist rule which has a penchant for binning Equality Impact Assessments when it suits them.

But he didn’t get much of hearing since Chris had him bang to rights, in the view of the wider audience, on the semiotics of the thing.

The problem for unionists is that they often win the argument by going through the due process laid down by law (think Ardoyne, think the Flag issue), but then lose the battle for public opinion.