The papers are full of the taoiseach’s speech to the Dail yesterday. Rightly so. It was an audacious speech, and one made in stark contrast to the parliamentary mumbling and stumbling of the two previous taoisigh. And, importantly, it was a defence of thousands upon thousands of ordinary Catholics, ‘who have been shocked and dismayed by the repeated failings of church authorities to face up to what is required’. 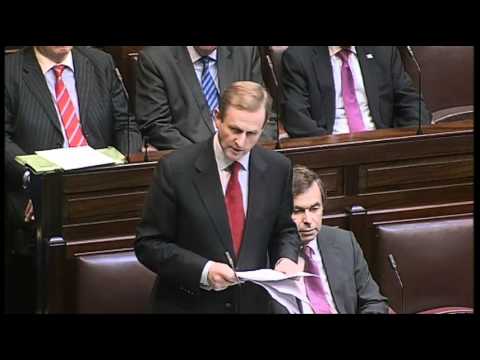 Somewhere in the Irish media in the last few days, someone described the Catholic church as the largest franchise holder in the world. In his speech, Enda, as westerly and as Catholic a TD as they come, was siding with the franchisees against the franchise holders in Rome. And a statesman like statement that the era of ‘Roma locuta est. Causa finita est’ (Rome has spoken, the case is closed) is at an end.

But there is something deeper here. The organs of the state have been examined and found wanting in regard to it’s handling of child abuse. But the church is not an organ of the state, or at least it has been put on notice that it is no longer to be slyly so conceived.

This was an appeal to the wider community, that they should allow the law take primacy over the strong local bonds of patronage and obligation, not least when he offered this brief precis of the social import of the Cloynes report:

Cloyne’s revelations are heart-breaking. It describes how many victims continued to live in the small towns and parishes in which they were reared and in which they were abused… Their abuser often still in the area and still held in high regard by their families and the community. The abusers continued to officiate at family weddings and funerals… In one case, the abuser even officiated at the victim’s own wedding…

And he further notes:

Clericalism has rendered some of Ireland’s brightest, most privileged and powerful men, either unwilling or unable to address the horrors cited in the Ryan and Murphy Reports.

This Roman Clericalism must be devastating for good priests…. some of them old… others struggling to keep their humanity….even their sanity……..as they work so hard…..to be the keepers of the Church’s light and goodness within their parishes…… communities… the human heart.

The promise of this speech is a powerful one, and one that is long overdue. The primacy of law is something the state has struggled with since its inception. Much of the huge debt burden Foreign Minister Noonan is desparate to extract the Republic from in Brussels today accrued because too much burden was put on trust between indivduals to the extent to laying the law to one side

The much vaunted referendum mechanism for empowering the wider citizenry of the state, and which was, in the past, often treated as a device for taking steam out of an issue which was then treated with disdainful neglect, has several times in the last decade been used to upbraid a political elite which has become over-embedded in the compromising vagaries of the local parish to detriment of their obligations as custodians of the national law.

There’s a striking parallel between “Roma locuta est; Causa finita est” and Charles Haughey’s famous maxim “Never explain, and never apologise”, which has to have been intentional. Little is left, for now, for his critics but ‘to parse and analyse with the gimlet eye of a canon lawyer‘.

For all the short term impact of Enda Kenny’s audacious and statesman-like speech, this is not yet even the beginning of the struggle to bring such a profound change in Irish political and social culture as to firmly establish the primacy of law over the pernicious clientelism which has dogged the Irish Republic since its independence.

Such actions that follow will speak much louder than words..