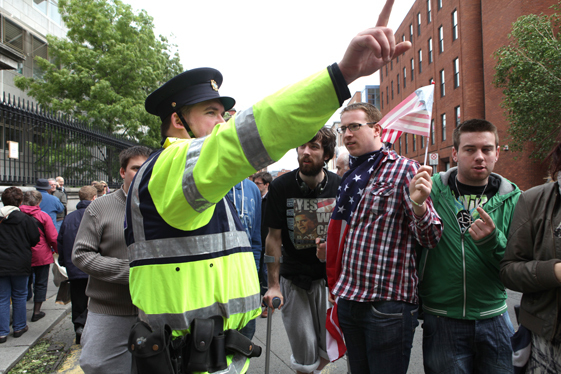 By chance I had a long standing appointment in Dublin yesterday so experienced at first hand the chaos on the streets of Dublin with the visit of O’Bama. Roads closed and diversions in place meant that a 20 minute walk took me 40 minutes. As O’Bama arrived in the early afternoon, I happened to be on the right side of the road as the cavalcade swept past with an improbable array of vehicles, including 4×4’s fully loaded with armed response units, smiling and joking as they swept through the empty roads. That delay of 15 mins was a minor inconvenience compared to getting bottlenecked (kettled) along with around 300 people at O’Connell bridge around 6.30pm.  There was no information coming from the Garda officers and the numbers grew steadily.  At one point I saw a man clearly freaked out at being caught in the crush. He made for the barrier but I don’t know what happened to him but he was clearly distraught at getting caught in such a crush of people.

We had to wait for 30 mins as the O’Bama’s said their goodbyes after the “concert” at the green. I had been in good time to get the 7pm train back but with the delay i got the station at quarter past 7. Thankfully Translink had delayed departure by half an hour. Whilst i understand the need for security and alternative routes etc, the Garda officers standing around with both arms the same length did not strike me as being very interested in too much other than getting the over time in and seeing if they could get a glimpse of the President.

Earlier in the day I had asked a Garda officer for directions. He told me he was up from Cork and had been since last week for the Queens visit and didn’t have a clue as to where I should be going with road closures etc. Whilst it’s understandable with the security concerns since the killing of Osama Bin Laden and the dissident threat I would have expected the Garda officers to be better organised and prepared to  inform people as to what was going on. Simple crowd control and understanding of the dangers of too many people in a confined space simply didn’t seem to factor into the thinking of the guarda. I am left unimpressed with the organisational ability of the guarda and their understanding of having large groups of people on the street with little or no direction from the authorities.