Goethe’s quotation, a long held favourite of mine, is a good summation of John Hume’s career as any I’ve come across.

What else he had planned for the rest of his life, in 1969 he caught sight of a Mountain which he was to make his life‘s mission to climb.

Hume was tribal enough to lead political nationalism, often to the frustration of colleague Seamus Mallon and Gerry Fitt, but moral enough to understand it must be tempered with ambition not simply for his own Tribe, but for all the people of Northern Ireland.

This allowed him to be robust in public debate with his political opponents (never enemies) and define common causes with the likes of Ian Paisley senior in his role as an MEP for the whole of Northern Ireland.

He was a relentless champion in the economic, politics and in the social improvement in his native city of Derry the wider Northwest through practical and pragmatic intervention on behalf of the people there to an extent no public representative that has come after him as even begun to touch.

When John Hume first got dementia, he would still go on long walks, you’d always see him along the Foyle. As it progressed, people would walk with him to make sure he was alright. A few people I know walked him home. John Hume looked after us, so Derry looked after him. RIP John.

He had an untiring energy and commitment to lobbying cajoling even bullying people into taking Derry more seriously even in the midst of the provisionals own destructive campaign against the economic interests of the city.

In his Cargo of Bricks interview Willie McCarter talks about Hume‘s relentless lobbying and whilst he was not the only factor in the fruit of the loom coming across the border into Derry, he never let it drop.

Hume had a great eye for the possible at the moment when most of his colleagues and opponents were buried in the fatalism of a seemingly endless conflict. Alone of the politicians of his age his legacy of an Agreed Ireland is one that no one Nationalist or Unionist can bypass in pursuing their own future goals.

This was myself and Alex Kane on Nolan this morning… 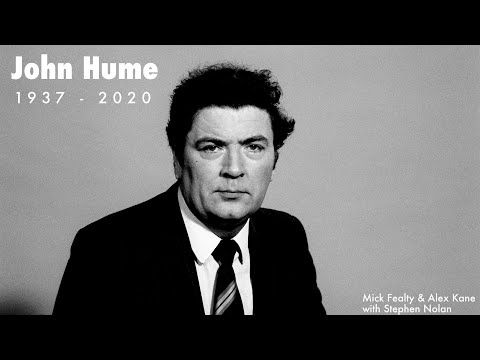