A long established Slugger tradition is the annual posting on Bastille Day of the clip from Casablanca showing the emotional singing of La Marseillaise (here). Perhaps I can start another similar tradition.

Today, 1 August, is Swiss National Day and a public holiday, but only if the date falls during the working week. It commemorates the events around the foundation of the country, and the struggle for freedom from the domination of the Holy Roman Empire.

There is documentary evidence that in “early August” 1291, though no more exact date is given, representatives from the forested cantons around the southern extremity of Lake Lucerne, the Urnersee, met and swore an oath of loyalty to one another, signing an alliance. This document is the original Federal Charter. The cantons, small, independent states were (and are) Uri, Schwyz and Unterwalden. Unterwalden has two parts, Obwalden, the upper part, and Nidwalden, the lower part. Lake Lucerne is, in German, the Lake of the Four Forest Cantons. As they had sworn an oath, an Eid in German, they are called the Eidgenossen, the “Compatriots of the Oath” and that is also applied to the nation, the Eidgenossenschaft.

The location of their meeting is not precisely known, but has traditionally been attached to the Rütli, a twelve acre meadow on the west bank of the Urnersee. The Rütli has over the years acquired a romantic and symbolic status as the site where Switzerland began. It is now the tradition that every 1st August, a senior politician delivers a heart-warming address from there. More recently, a tradition there has also been, sadly, a demonstration from far-right extremist groups. Another tradition is the lighting of bonfires on hilltops and mountain sides in the evening.

The date of 1 August 1291 was a pragmatic choice made shortly before the 600th anniversary of the foundation of Switzerland. It was initially contentious, with some preferring 1307. On 25 July 1940 when the threat of German occupation was high, the Army General Henri Guisan took 650 of his senior officers to the Rütli, forcefully reminding them that Switzerland would resist any Nazi invasion, and would never surrender:

I decided to reunite you in this historic place, the symbolic ground of our independence, to explain the urgency of the situation, and to speak of you as a soldier to soldiers. We are at a turning point of our history. The survival of Switzerland is at stake.

The Rütli from the Urnersee, July 1983

In the middle of the 19th century the Rütli was in private hands and there were plans for a modern development including a hotel. This sacrilege so horrified many citizens across the country, that a movement was formed to collect money to buy the meadow and present it to the federal government on behalf of all citizens. The story, the legend, says that it was the Swiss school children who collected for this and donated their pocket money. In any event, the purchase was successful. 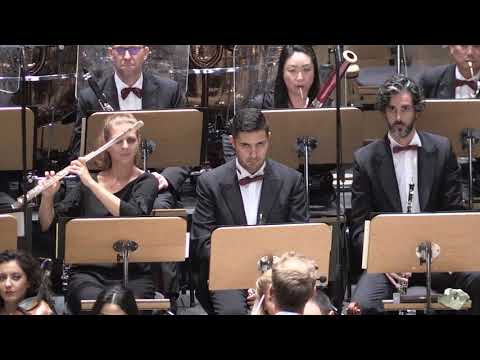 An alternate version of the struggle for freedom is the story of William Tell, the chap who shot the apple on his son’s head. This is conventionally dated to 1307.

The story was taken up by Friedrich von Schiller, who although he had never visited Switzerland, was helped by his wife Charlotte who had been to the area, and by his friend Goethe. Schiller wrote Wilheim Tell, a play in five acts, and published it in 1804, incorporating the themes of freedom, with Tell as an ordinary, freedom-loving man of action who opposes the despotic power of the Habsburg bailiff, Hermann Gessler. Tell’s assassination of Gessler is presented as an act of self defence, while the third theme is a love interest in which the male character has a change of beliefs.

The first part of the play presents the backgrounds of the story and some of the characters. The aged Werner, the Baron von Attinghausen, realises that the age of feudal power is over, but his heir and nephew Ulrich von Rudenz is excited by the glamour of Gessler’s court, and has fallen in love with Gessler’s ward, the aristocratic heiress Berta von Bruneck, and goes off to join them.

The chiefs of the three cantons, including Werner von Attinghausen from Uri, meet and swear an oath, in Schiller’s words:

A little later the conspirators meet by moonlight on the Rütli and vow to expel the occupying Habsburgs. Tell, the individualist, is not one of them.

Meanwhile Berta and Ulrich meet; she has taken the side of the peasants against the tyrants. She tells Ulrich that she can only love him if he joins her in this, and she is able to win him over.

Tell and his elder son Walter set off on a visit, and pass through Altdorf, the capital of Uri. There Gessler has set his hat on a pole and ordered the population to bow to it as they pass. Tell doesn’t bow, and is quickly arrested. Gessler arrives on the scene, and recognises Tell as a marksman. Young Walter boasts that his father can hit an apple at a great distance. Gessler demands proof, and Walter is forced to stand with an apple on his head. Walter promises to “stand still”. Tell takes two bolts or quarrels from his quiver and loads his crossbow with one and shoots, cleaving the apple.

Gessler demands to know what the second bolt was for, and Tell replies that if the first had struck his child, the second would have gone through Gessler’s heart. Gessler orders Tell to be bound and taken across the Urnersee to prison. A severe storm breaks as they are crossing the lake, so the guards release Tell for he is the only one who can save them. Tell jumps ashore, but pushes the boat back into the lake.

In the meantime, Berta has been imprisoned by Gessler’s henchmen, while Ulrich is now firmly on the side of the people. He returns to find the old Baron dead, after declaring that, “the day of the nobles is passing, and the new day of the people is at hand”. Ulrich becomes the leader of the peasants who rise in revolt, but wait for a signal, a bonfire on a hilltop.

Gessler rides through the Hohle Gasse, a narrow, artificial defile cut through the rock. There a beggar entreats him for help as her husband is in prison and her children are starving. Gessler orders her out of the way, and threatens to ride over her if she doesn’t. At this Tell, who has already decided that putting an end to Gessler’s tyrannical actions is morally justifiable, assassinates him with the second bolt.

This action starts the uprising. Ulrich rescues Berta from prison, and they and the people throng towards Tell’s house. The aristocratic Berta asks the peasants to be allowed to join them, and they agree. Berta gives her hand to Ulrich, saying, “I give this young man my rights, the free Swiss woman to the free man”. The play ends with Ulrich’s response:

Schiller’s play has been performed in the open air theatre in Interlaken every summer from 1947. The stage is specially designed for this, no other play can be performed. All the actors are locals and amateurs. Sadly, the coronavirus means that this year’s performances have had to be cancelled, as have many other festivities. 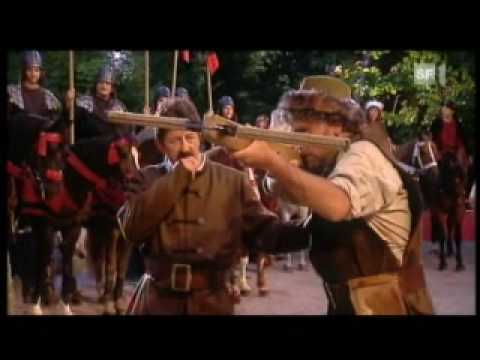 Rossini wrote his opera Guillaume Tell based on a French version of the play. The extract above is the final part of the overture, often called the March of the Swiss Soldiers, and represents Swiss horsemen at a gallop triumphing over the Habsburg oppression. Please try not to think of anything else as you listen to it. Rossini’s opera not unsurprisingly fell foul of the censors soon after it was published. Verdi’s opera Nabucco, particularly Va Pensiero, The Chorus of the Hebrew Slaves; and Sibelius’s Finlandia both had similar problems. Shiller’s play was banned by Hitler in 1940. And all for the same reason.

Historical research confirms the general authenticity of the meeting on the Rütli, and the Eidgenossen, if not all the details. This agreement was only one of many anti-Habsburg pacts at the time, not all of which were kept.

Historians, miserable, unromantic sods that they are, are in agreement that William Tell did not exist as a person, but the legend represents a personification of the fight against tyrannical oppression. They have also concluded that the legend of the Swiss children and the pocket money is true.