One wintery evening in the early 1970s, a RTE film crew arrived at my boarding school, St Columb’s College on Bishop Street in Derry, to make a TV documentary. It was rare excitement in the boredom and routine that defined the boarders’ lives. The subject of the documentary was an ex-boarder, the poet Seamus Heaney. One scene involved an actor – or perhaps it was the poet himself –sneaking down the wrought-iron fire-escape attached to the grey-stoned gable of Senior House. With large arc lights challenging the darkness, cameras rolling and we, the blazered-bunch, watching on, he gingerly tip-toed from the top storey senior bedrooms past the apartments of the college president.

Stepping Stones, Denis O’Driscoll’s interviews with Seamus Heaney, and the nearest we get to an autobiography of the poet, mentions little about St Columb’s and his time there. This I have always found a puzzle since he spent six of his most formative years in the walled college on Bishop Street separated from family for periods of 9 weeks at a time.

The Boys of St Columb’s; Maurice Fitzpatrick’s book to accompany his TV documentary identifies Heaney among eight outstanding college alumni. Fitzpatrick argues, correctly I believe, that St Columb’s powerfully influenced each of these young men and gave each an independence and unique strength of character that made them such powerful influences on others.

Heaney was never explicit about a “St Columb’s Effect”, and there is little evidence in his poetry that it significantly influenced him. But Heaney recognised the seismic changes the 1948 Education Act brought for his generation in the “North of Ireland”. For him the offer of a grammar school education would, singularly, make the difference to his subsequent career and international success.

An event marked indelibly on Heaney was the death of his younger brother Christopher and the inspiration for his poem Mid-Term Break. Written long after leaving St Columb’s, the tragedy begins in the college “sick bay” a room all boarders knew as a refuge, a place of great succour in an otherwise emotionally sterile environment.

Years later, when Heaney suffered his first stroke, he remembered that bell, rung from a ceiling-hanging rope just outside the sick bay where he waited that morning. A senior boarder was tasked with bell ringing for class change, call to study and call to mass or rosary and Heaney, like all boarders, did it in his turn.

“Or the one I tolled in Derry in my turn

As college bellman, the haul of it there still

In the heel of my once capable/Warm hand…”

The regimentation inculcated into the young Heaney during his six years at St Columb’s is neatly book-ended here. St Columb’s created a strong structural framework from which he could be creative yet he knew this creativity would amount to little without that framework, dull and boring as it might be.

It was this discipline that supported the fulsome creativity that would flow from Heaney in poetry and so many others of the college alumni; Seamus Dean in literature, Paul Brady in music, Brian Friel in drama and John Hume in politics.

OK, Seamus Dean was not a boarder but John Hume was an “honorary boarder”. Phil Coulter, for example, was a pop-showman something a boarder could never be.

The dull routine of day-to-day living for boarders, which off course was almost a seminary in Heaney’s time, was for those who complied with its rules and regulations, a comfortable and secure place to be.

St Columb’s cast a deep and prolonged spell on all those who boarded within it walls and enjoyed, or endured, its direction and its discipline. It aspired learning and creativity but it kept us humble and self-effacing; we did not get too big for our boots on our own behalf we generally did that on behalf of others.

Heaney’s discipline, his lack of showmanship – ironic for someone so famous – his attention to detail all stem from a culture that existed among St Columb’s boarders up to the time the college stopped boarding in 1976.

Gravel Walks, a line from which adorns the poet’s grave at Bellaghy, speaks to this while not mentioning St Columb’s. For those of us who came through that regimen it doesn’t have to. St Columb’s was the “grey cement” boarders brought away from their stay and for this dull foundation, binding material we are eternally grateful. 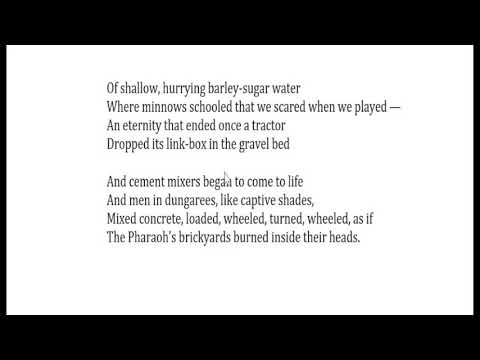 “So walk on air against your better judgement

Establishing yourself somewhere in between

I am a pharmacist in Belfast.