Judith Thompson, Commissioner for Victims and Survivors, delivered the opening address at the John Hewitt International Summer School on Monday morning. Long-planned and advertised in the programme, her speech was very timely, given that as she drove down to the venue in Armagh, she would have heard calls for her resignation on the radio during a heated debate on who should be offered a so-called Troubles pension.

You can watch back her speech in which Thompson recalls her first job in Northern Ireland as a probation officer working in north Belfast, the area in which John Hewitt was born, before explaining at length the background to the definition of a victim. 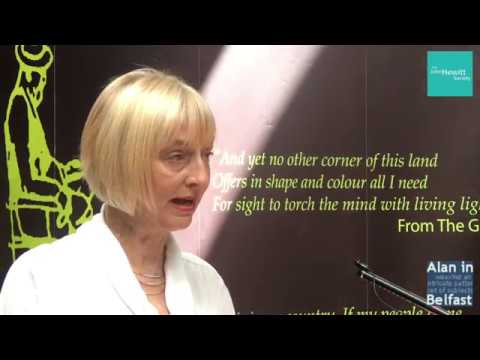 “The 2006 order does define who is a victim. It defines it in a very inclusive way which is not unusual in terms of looking at criminal law and victims.

“So first of all, it’s somebody who has been physically or psychologically injured … it goes on to say an individual may be psychologically injured as a result or in consequence of witnessing a conflict-related incident, or providing medical or other emergency assistance. So it’s very explicitly straight away including ambulance service, medics, police, fire and rescue service and all of those other first responders, as well as civilians who often were the first responders in cases where violence happened on the street. It’s a definition which includes all of those.

“And it also – and I think quite rightly – includes anyone who provides a substantial care on a regular basis for an individual mentioned above. So carers, usually they’re family members, but people, whose lives are changed just as much as the person who’s harmed sometimes, by the impact of becoming a carer. And people do it willingly, but nevertheless it changes their lives and stops [them] in many cases from having opportunity they might otherwise have had.

“And of course somebody who’s been bereaved as a result of or in consequence of a conflict related incident.

“Now I’m very, very aware, I talk to good people who are hurt by that inclusiveness, who feel that there should be an exclusion of people who may have caused harm to others. And I can’t argue their right to feel as they feel. But if I’m going to carry forward and do the job I’ve been appointed to do, I have to work with the law as it is, and I have to get on and do things rather than spend my life unpicking the basis of that law.

“And people who have done bad things change and do good things later in many cases. People who did bad things when they were very, very young don’t be characterised by that always for the whole of their lives. You know there is something about seeing people in the round.

“So there’s a lot of very complex uncomfortable things which I think we as a society just need to hold in the space we’re in. And sometimes I can do no more than acknowledge the discomfort and the hurt and just do the best I can, in the scenario I find myself in, to do the best for the greatest number of people who have suffered harm. So it’s an uncomfortable definition, but this is not a comfortable situation. And nobody can look back comfortably on what happened in the last 40 years and before. And maybe we shouldn’t expect to feel comfortable looking back, because there are challenges to all of us.”

Research by the Commission indicates that around half a million people – nearly one in three – meet the definition of a victim. The mental health of up to 200,000 people has been impacted by the Troubles, with 17,000 of those people suffering symptoms that meet the definition of PTSD (Post Traumatic Stress Disorder).

The word ‘discomfort’ was repeated during nearly every section of Thompson’s talk.

Her talk finished by addressing the issue of the pension head on.

“The other important issue I want to talk about now is how we look after those people who’ve been severely and permanently injured and require care on a daily basis. The Stormont House Agreement recognised that and talked about a pension for the physically injured. But actually it’s not only physical injury. Anybody who’s suffered massive physical trauma also suffered massive psychological trauma through the initial incident, through pain, through repeated surgery, through the changes that happened to their lives. And I believe firmly and I’ve met some of them and I’ve met their carers, there are people who are severely and permanently debilitated by their psychological harm as well. I know I’ve talked to the carers of those people whose lives are just as impacted as those who suffered physical harm.

“So last year when the Secretary of State asked me to take the advice that had been delivered by my office and my predecessor in 2014 and update it I was pleased to do so. It seems to me a way of moving one step nearer to doing something to help those people. And I’m going to talk for a minute about who those people are because it brings it home.

“Jennifer went for a coffee with her sister when she was 21 and lost both legs in a bomb. Her sister lost two legs and an arm. They’d just gone for a cup of coffee. The compensation they got at the time was absolutely derisory and the process they went through to get it is described by Jennifer as an insult. That money was long gone now. Jennifer’s lost the adapted home she had as well: she couldn’t afford to keep it.

“People like Alex who was a taxi driver who lost his taxi and his leg when he got mixed up with his next-door neighbour and a bomb was put on his taxi. So Alex had insurance, had his own business, had his own livelihood, but that insurance doesn’t pay out for a Troubles-related incident. And the compensation he finally got five years later managed to buy a place for him to live, which he had lost, but didn’t provide anything to care for him now.

“So I updated my advice. My advice did not have within scope the issue of who should not get this pension because I can’t, and because it does not seem to me to be the thing I should be advising on. I work under a piece of law which dictates the parameters of what I do. I don’t spend my days at work unpicking the fact that we have a Commission and a strategy and some money and ability to move forward, I do what I can within it.

“My advice addressed all the issues that I could around treating physical and psychological harm in an inclusive and balanced way, and looking at how you would actually in the least traumatic way possible try to define the levels of disability to which it will apply, and there was a great discomfort in just addressing the tip of an iceberg – but that’s got to be done – and in trying to look at how you can’t repair that harm, you can’t repair that harm, but you can try and get the people who are harmed the best kind of life they can have.

“I delivered the advice within the terms of reference I was given and within the legislation which I operate in. Last week it went through the Houses of Parliament as an addendum to a different bill. As things stand at the moment there is a real potential that some of these people will get the help they need.

“I also want to acknowledge that we haven’t yet seen a complete ending to paramilitarism. And I’ll say no more now other than to say all harm is wrong, always was, still is. All harm, all acts of violence, were always wrong and still are, and people who suffered violence still get up in the morning to hear of more violence happening on our street. What does that do to our society? What does that do to our people who suffered harm? We haven’t got there yet, have we?

“And in closing I’m going to go back to where I started. Most importantly of all the aim of addressing the legacy of the past must be to build a better future, at a civic and at a political level. There’s still a war of words about harm inflicted, and that war of words itself is often to the detriment of people’s suffering.

“So I made recommendations that are designed to address the outstanding impact of the conflict, psychologically, physically, in terms of justice and acknowledgement, and in terms of moving forward and becoming a more peaceful place.

“And although 21 years after the signing of the Good Friday Agreement we maybe don’t sometimes feel we’ve made the progress we should, I also think we shouldn’t be surprised or slow to realize that these things take time. When I go to other places where horrible harm has been inflicted, like Cambodia, like the Balkans, as in Afghanistan as well, you see just as long lasting impact. We’re not unusual in that respect, it’s just something we have to carry and move forward in a positive way with.”

This month’s episode of Slugger TV was recorded down in Armagh in front of the summer school audience on Monday evening. The John Hewitt Society’s varied programme of events continues until Saturday.