There has been some speculation that Boris Johnson will finally bring the Irish government to heel in Dublin. The trouble is that whatever the shortcomings of Leo Varadkar’s domestic handling of Brexit he is now locked in by the consensus around his own deal with May.

Furthermore, no one who is serious in Dublin politics believes much of anything he chances to say in his frenetic efforts to get to the top of the Conservative party. But that does not mean he is not perceived as a threat, as I noted on Sky News the other night: 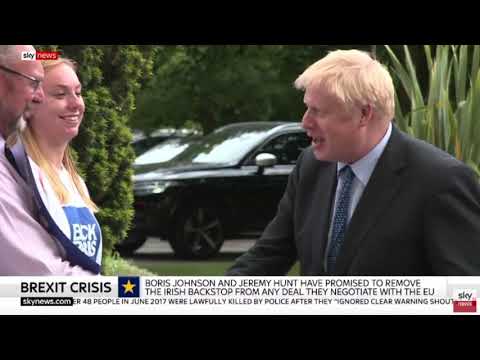 He very much is, and the Irish economy remains (as it has been all along) a major hostage to the whole Brexit process. Despite the potential damage to that economy, Ireland’s written constitution (with its binding use of referendums) ties the arms of the executive.

Ireland (and the willing majority of its citizens) are committed to the EU and by extension, to the protection of the Single Market in the face of the potential of a future freebooting UK. Mrs May plugged the gap with something called the Irish Backstop.

If Mr Johnson wants to change that it, he can. But there is no way a new solution will be ready in time for the deadline (it’s doubtful given he’d only have two weeks in power by then that he’d have time to push through a tweaked version of Mrs May’s deal).

Then again there is also no way that Donald Trump ever intended building a wall. For Ireland, under the current terms, the backstop is all there is until and unless it is tweaked in a way that unlocks that still unlikely majority in the House of Commons.

If there’s fault on the Irish side, it was in donning the green jersey and encouraging the backstop to be objectified as a form of market annexation of Northern Ireland.

More fundamentally the bilateral decision to place the Irish border at the centre of Irish politics has done infinitely more damage to Irish politics north and south than any other single aspect of these negotiations.

Like Brexit itself, this was always certain to fail the exponentially high expectations that were set for it. A classic Johnson-eque lie that it is ever possible to have your cake and eat it.