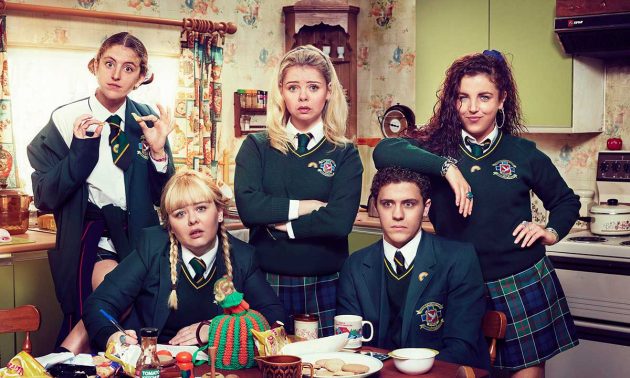 Has there ever been a more eagerly anticipated series of a sitcom in Northern Ireland than the start of the second season of ‘Derry Girls’?

A lot has happened in the 13 months since we last saw Lisa McGee’s characters dancing in solidarity with Louisa Harland’s spaced out Orla McCool at their school talent show.

Last summer, the Channel 4 Troubles sitcom pipped the BBC’s ‘Inside No 9’ to become the Radio Times Comedy Champion in a desperately close online contest.

The cast were afforded the honour of their own edition of Richard Ayoade’s ‘The Crystal Maze’ on Channel 4.

An online petition saw people campaigning for Siobhan McSweeney’s droll Sister Michael to deliver the channel’s Alternative Christmas Message – don’t be surprised if that campaign is resurrected in the coming weeks.

And then, the world eventually got to see what all the fuss was about when Netflix acquired the first series and put it on their platform in December, garnering rave reviews from the US to Pakistan.

One year on and a few screenings of Series One under the belt and it is even clearer how rich the first series was.

Few would dispute that McGee’s sitcom was a deserved success and has the potential to be a comedy classic.

Series 2, however, will ultimately test if it is worthy of all that adulation.

Just like Jimmy Rabbitte at the start of Alan Parker’s movie of ‘The Commitments’, Erin pretended in the bathtub that she was being interviewed by Terry Wogan.

Her dream was shattered when Orla stormed in to burst her bubble bath, telling the rest of the Quinn family that Erin was pretending again to be on ‘Parkinson’.

Soon the girls and the wee English lad from Our Lady Immaculate College were packing their bags for a ‘Friends Across The Barricades’ outdoor pursuits adventure with pupils from Londonderry Boys Academy.

“Do the Protestants have to bring waterproof trousers or will the Catholics be expected to do all the dirty work?” Tara Lynne O’Neill’s Ma Mary asked, grumbling about the cost of the waterproofs.

As the gang gathered for their cross-community adventure, Ian McElhinney’s Grandpa Joe was unusually conciliatory towards the “wee lesbian”, Nicola Coughlan’s Clare.

Revealing he had heard a KD Lang song on the radio, he observed she had “some set of pipes on her”, before telling Clare: “You are a very talented people.”

As the Quinns watched Gerry Adams being interviewed on TV dubbed with an actor’s voice, Kathy Keira Clarke’s Aunt Sarah said apparently the Sinn Fein president’s voice was forbidden because it was quite “seductive.. like a West Belfast James Bond”.

Tommy Tiernan’s Gerry found it hard to believe Mr Adams’ voice was banned for being too sexy.

With Jamie Lee O’Donnell’s wild child Michelle Mallon fantasising about Protestant boys having “serious moves up their sleeves” and her hapless English cousin, Dylan Llewelyn’s James Maguire desperate to prove his lad credentials, they set off for the corner shop to get peace offerings for their Protestant counterparts.

These turned out to be half a pack of Rolos and an Ulster Bank key ring.

Joining them on the adventure was the world weary Sister Michael and an equally cynical teacher from the Londonderry Boys Academy.

After the gang were paired with their Boys Academy counterparts – except Orla and James because there were “not enough Protestants to go around” – Peter Campion’s Fr Peter returned despite abandoning the priesthood in the last series for a hairdresser.

Fr Peter gamely ignored Michelle’s taunts about that failed relationship and tried to get both sets of students to focus on the similarities and differences between Protestants and Catholics.

The problem was none of them, including Erin, could come up with any similarities.

Differences were reeled off such as “Catholics get a buzz off statues and we don’t”.. “Protestants like to march and we like to walk”.. “Catholics have more freckles” and Orla’s equally bizzare contribution: “Protestants hate ABBA!”

Erin, Michelle, Clare, Orla and James later gatecrashed the room of some Boys Academy pupils for an impromptu party, as Michelle tried to zone in on Harry, the hunkiest Protestant student and Erin tried to seduce another bloke called Dee.

With advertisers tripping over themselves to wrap themselves in the ‘Derry Girls’ vibe, it was a relief that McGee’s writing in this episode remained as sharp and laugh out loud funny as the previous series.

The episode was at its best in lampooning the petty myths and prejuduces that both communities have harboured about each other.

But McGee also demonstrated once again her flair for laugh out lines.

Sister Michael got to deliver a stinging rebuke to Leah O’Rourke’s irritating school lick: “You will go far in life, Jenny but you will not be well liked.”

Orla also had a great joke about a hunting knife.

Under Michael Lennox’s assured direction, the opening episode was confidently executed, with the cast on top of their game – especially Harland.

You could almost smell the relief of ‘Derry Girls’ fans on social media.

And as we head into Lent, it is safe to say few people in this part of the world will be giving up ‘Derry Girls’ in the weeks ahead.

Dan McGinn is a journalist who was previously the Ireland Political Editor and Ireland Deputy Editor of the Press Association and has worked for the Irish News, Belfast Telegraph and other publications and for TV and radio. He currently works in communications and public affairs and is also a film and television critic with his own blog They’ll Love It In Pomona which covers the latest cinema and television releases.