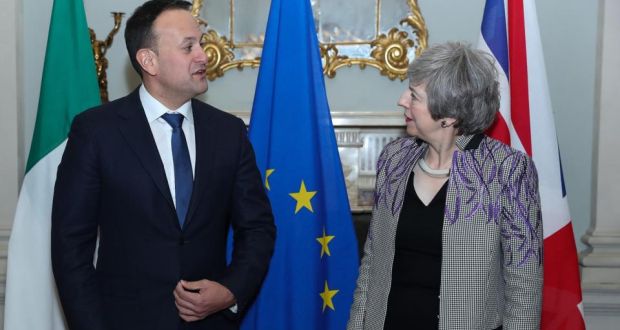 However they’re phased and whatever the context, close British Irish engagement on both Brexit and rescuing the GFA are essential. Who with any wit can doubt it?  Brexit provides no excuse. Indeed, it’s one of two pressing reasons for close encounters, the other being the Stormont stand-off.  Dinner in  Farmleigh House  may have been in Theresa May’s programme of displacement activity as she mulls over Labour’s offer to talk and runs down the clock, but at least it  displayed  dim recognition that both governments have a problem or two here that one day – soon maybe – they might have to start sharing again.

And indeed there’s lots to talk about. The ability of the UK to exit under its own conditions from the backstop should be recognised although like the backstop itself, never used. This we are invited to conclude from a revealing account of the British strategy pieced together by RTE’s Tony Connelly, clearly informed by a detailed British briefing. The British plan involves British-Irish talks on avoiding a hard border paralleling the main EU negotiations. Mrs May  expects  it to be opposed by the hardline Brexiteers of the ERG and, if it is agreed,  she will tailor her parliamentary tactics accordingly.

Not that this was discussed between Leo Varadakar and Theresa May over dinner at Fairview last night. God No! Not a clue either how Dublin might respond.  The UK’s chief negotiator Olly Robins, and Ireland’s top Brexit official John Callinan were only there to sweep up the crumbs.  So we have to  assume that formal bilateral British-Irish talks will not take place until the UK actually presents the EU with a plan and the EU replies. This could be as late as the beginning of March.  St Patrick’s week may be a subdued occasion this year with the Cheltenham festival under threat from equine flu and the cliff hanger of Brexit overshadowing the usual high level St Patrick’s week junketings in the States.

Tony Connelly begins with the  fundamental question of the hour.

So, what exactly is Theresa May’s strategy?

She has managed to re-open talks on the backstop. She and Jean-Claude Juncker will meet again before the end of February, Michel Barnier and Stephen Barclay, the Brexit secretary, will meet on Monday.

In London, the Working Group on Alternative Arrangements is continuing to look at technology, expiry dates and unilateral exit clauses….

Ahead of the prime minister’s visit to Brussels on Thursday, British officials were coy as to what precise changes Theresa May would seek.

“We’re not specific on surgery or an additional mechanism,” said one official. “We’re clear that changes to the Withdrawal Agreement are required, but we’re open as to how that can be achieved. But it has to be legally binding.”

However, according to recent and previous discussions with senior British figures, it is clear that the emphasis will be on a unilateral exit mechanism – where the UK can walk away from the backstop – with a renewed focus on the bilateral relationship between the United Kingdom and Ireland….

We’re back at the fundamental dilemma. As the world’s fifth biggest economy, Britain is struggling to reconcile the need for high alignment (to protect the Irish border), with the desire for freedom to negotiate its own trade deals around the world.

Yet, so far the EU has resisted the idea that there can be two regulatory spheres side by side that are similar but not identical, with an ambiguous degree of monitoring, compliance and enforcement. ( basically Chequers).

A fundamental red line for Brussels has been that it maintains “regulatory autonomy”, i.e. it makes its own rules for its own internal market.

But London continues to challenge this on the basis that the UK is too big an economy to be subservient to the EU’s regulatory orbit.

The UK and the EU should be able to set “a totally new gold standard on how you do international regulatory cooperation,” according to one official.

Chequers provide the basis for this, is the argument, with its sector-by-sector alignment ideas. Even then Britain is already subject to being a rule-taker in a significant number of areas…..

The proposal comes with the slightest hint of threat. “You want Europe to remain a global leader in regulatory standards,” says the official. “But the EU would want to avoid the UK being too tempted to go the way of the US [in terms of regulatory standards], and so you have to find a way to do that which takes account of the political realities.”

Theresa May’s strategy will involve a parallel line of pressure on Dublin.

This should be taken up bilaterally by Dublin and London. Expect phrases in the coming days reflecting both countries’ “common endeavour” to preserve the Good Friday Agreement.

“Ultimately, we need to find a way through this that Dublin feels comfortable with,” says a source. “We have to try and disentangle the longer term commitment to no hard border, and this particular set of arrangements.”

Dublin so far has resisted the “bilateralisation” of the backstop issue. It is for the EU27 to decide is Ireland’s line.

British sources admit that both parallel tracks as a way out of the impasse are complex, and would not command the support of parts of the ERG, not least because it exhumes Chequers.

But amid the fog of where we go next, this seems to be the plan.

On the other little matter we’re told was raised at Fairview but left unbriefed,   the veteran ex-diplomat and a leading negotiator of the modern British -Irish relationship   Noel Dorr exposes the issues everyone is aware of but few like to confront just now, apart from Sinn Fein in their own fashion. Dorr rightly  deplores our old fond enemy, the zero sum game.

It is understandable that our concerns about Brexit should focus particularly on the economic consequences of a hard border in Ireland and the fear that this could lead to a return of violence.

But there is another, possibly deeper, reason for concern: Brexit, in conjunction with recent developments, could call into question not just the Belfast Agreement, but the fundamental ideas underlying every major approach to a settlement of the Northern Ireland problem since the early 1970s.

The unspoken hope was that another generation would, over time, find a way to resolve the historic tension between unionism and nationalism in this island without reducing it to a zero-sum game.

It is this idea, and this hope, which is now called into question. First, by Brexit, which threatens to set North and South in Ireland – and indeed Great Britain and Ireland – on sharply diverging paths after 20 years of peaceful convergence within the European Union; and, second, by the approach over the past few years of the two Northern Ireland parties who were elected to make the agreed institutions in Northern Ireland work.

The DUP is now the sole voice from this island in Westminster apart from the courageous lone unionist voice of Lady Sylvia Hermon.

The party has succeeded in establishing the belief that the favourable deal the EU offered to Northern Ireland threatened its constitutional position within the UK – as if that were still the same as Yorkshire or Devon and not the wholly distinctive status, with the capacity for possible future change, which was agreed, legally, in 1998.

Sinn Féin, on the other side, wants to resolve the issue in the opposite sense by demanding a border poll on Irish unity.

To adopt either of these two approaches now would be to treat the future of Northern Ireland once again as a zero-sum game.

Irish nationalism as a whole could perhaps begin to consider some more generous approach than the simple majority, North and South, that is implied in the Belfast Agreement provision about future Irish unity. Would doing so not better meet that other commitment in the agreement to “just and equal treatment for the identity, ethos and aspirations of both communities”? And would it not lead eventually to a more stable future Ireland and ensure that we do not reduce our old historic problem in the island in the end to a zero-sum game?