Stuck in the Past was the title of this afternoon’s debate at Féile an Phobail. The audience in St Mary’s College assembly hall heard from the Victims’ Commissioner Judith Thompson, academic Prof Louise Mallinder, as well as the PSNI Chief Constable George Hamilton, Winston Irvine and Seán Murray.

Journalist Brian Rowan chaired the event and injected conversations from the floor, bringing in the voices of the Police Ombudsman and officials from the Northern Ireland Office as well as questions from members of the audience. 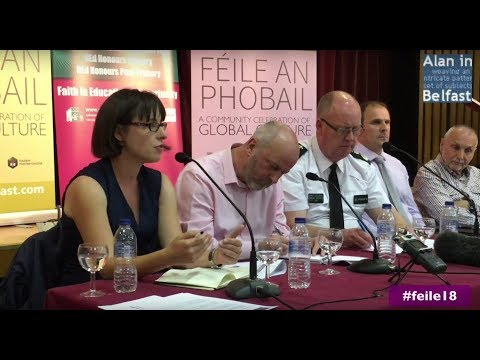 Much of the conversation revolved around the NIO proposals on legacy issues which are out for consultation until 10 September. Judith Thompson briefly outlined her principles for moving forward while Louise Mallinder shared her perspectives on the wisdom of some of the proposals.

The Chief Constable remarked that “As a police officer, as a chief constable, as a human being, I want the truth to emerge”, and reiterated this point to victims’ relatives in the audience. He spoke about the mountain of information held by the police, estimating 45 million pieces of paper and three legacy IT systems which aren’t fully searchable and are not interfaced together. Seán Murray emphasised that republicans were in “solution mode” and wanted to make legacy processes and truth recovery work.

During the Q&A, former Director of Public Prosecutions Barra McGrory spoke of the legitimate hiding places from sharing information that those involved in the conflict could exploit – indeed would be advised by their legal teams to use – with the chance that judicial processes may run in parallel with truth recovery.

“Really difficult choices have to be made, and in my opinion the better choice is to go with information retrieval, and accountability [through] that retrieval.”

While not offering support or agreeing with any specifics, the Police Constable suggested that McGrory’s remarks – first made in May this year – bore close examination.

In the absence of a fully functioning Policing Board, for a brief moment this afternoon, it felt like the Chief Constable was being held to account, albeit by a small number of people about a narrow range of subjects.

Three years ago, the same hall was venue to a conversation between the then deputy First Minister Martin McGuinness and the PSNI Chief Constable, again chaired by Brian Rowan. That night, the atmosphere was electric.

This afternoon, the conversation seemed less extraordinary, certainly less unexpected. Unfortunately, the political stalemate has become as normal yet unacceptable as the stretched patience of victims and survivors who seek truth and information about incidents during the Troubles.