If history is the beginning of the understanding of complexity, then Dr Martin Mansergh’s address which opened the 2018 John Hewitt International Summer School unearthed more than a hundred years of nuance and detail around the place of the border in north-south relations.

Mansergh was an Irish Senator from 2002 to 2007, and once elected as TD for Tipperary South he served as Fianna Fáil Ministers of State in the Finance and Arts departments between 2008 and 2011. 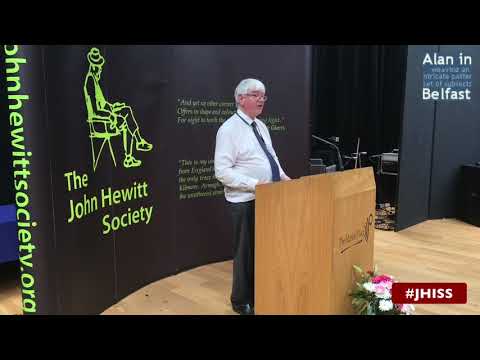 His talk, titled Transcending Boundaries of the Past and the Future, touched on pluralities of identity across the island as well as the patchwork of political and legal agreements that shaped the porous border, including in 1945 in the aftermath of the Second World War. He began:

“Especially in the month of July, but also through the whole decade of centenaries, it is easy to imagine that lines of division in this country were immutably drawn a century or more, or even several centuries ago.”

“One of the charges that can be laid against a lot of politics of all stripes is the preference for the simplified narrative and resistance to significant amendments to it. Identifying and reducing exaggerated differences and oppositions has an important part to play in creating a more harmonious future here.”

You can watch his half hour talk in which touched on Trump, Churchill, Carney, Peel, Haughey, the Brexit backtop and seamless borders.