Marking the 50th anniversary of the civil rights movement, the political panel at this year’s John Hewitt International Summer School was asked: What went wrong?

From the earliest contributions from Bríd and Gregory, it was quickly apparent that the panellists’ conflicting “realities” would be hard to reconcile. There were moments of shared acknowledgement; but often they were immediately followed by confrontation or robust challenge. 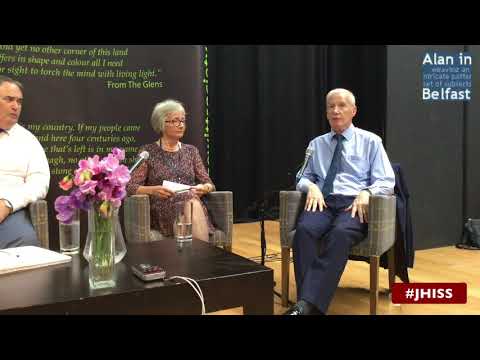 Bríd agreed that people from all communities lived with deprived circumstances and voted for unionist parties otherwise they’d be pushed into a united Ireland. It never occurred to them to vote for another party, the Labour party, that would have looked after them … There was definite discrimination in a lot of places … against nationalist people.

The Fermanagh and South Tyrone MLA added: “I think people increasingly looked towards the IRA to defend them …. there was momentum … and one event begat the other.” Audience members were quick to question when the IRA ever defended anyone.

Later in the discussion, Bríd returned to the topic of violence: “The political process was here. People had a choice. It was slower, but …”

Gregory asked why the civil rights campaign continued when “the core demands were conceded with a few months of the start?”

On the subject of discrimination, Gregory sounded like he was excusing or explaining away some of the discrimination experienced in the late 1960s which he described as “rife” at a time when “there weren’t any regulations, no statutes to deal with discrimination.”

“Now there are statutes to deal with it” he asked why “Catholics are more likely to become police officers than Protestants will be housing officers in the Housing Executive?”

“Even with regulations we still have disadvantage” he said.

Trevor spoke about his father’s recollections of being a policeman and his own memories of moving around Northern Ireland following his Dad’s postings. But it was a recent visit Trevor made with his son to Dublin to visit Easter rising sites and then across to northern France to see First World War battlegrounds that led him to list three rules and make an observation about the role of politicians:

Trevor asked: “Who puts your children into the hands of the generals? It’s the politicians.”

I don’t recall any of the three current or former politicians on the panel disputing or challenging this assertion.

One of the questions you ask after a political panel on a potentially contentious subject is whether there was more heat than light. In this case, there was certainly plenty of heat. As chair, Peter Osborne was vociferous in trying to get answers to key questions and diligent in giving evasive answerers another chance to explain their position. Yet there was also light.

Gregory Campbell didn’t duck the issue of admitting that there was discrimination. Colm Gildernew volunteered “that the entire conflict was regrettable”. It may seem petty, but not so many years ago, these would have been points that, if made in public, would have been deemed by many to have been ‘conceded’.

There are a lot of events, discussions and programmes looking back at the Civil Rights Movement. There is a lot of focus on a handful of key moments at the start of the timeline – particularly Caledon and Burntollet – at the expense of exploring other factors.

Claims – usually by nationalists – that unionists were involved in the Civil Rights Movement are normally batted away by saying that they were ‘token prods’. But a better line of discussion might be why weren’t more unionists involved?

Was Magee College robbed of the chance to be the site of Northern Ireland’s second university? Read Gerard O’Brien’s book chapter on the ‘Our Magee Problem’: Stormont and the Second University if you want to tease out whether placing the New University of Ulster at Coleraine was a political and/or civil rights-informed issue.

And what mistakes fifty years ago can we learn from today and apply to the current situation with a political stalemate, violence flaring up like a spark hitting dry tinder in working class communities in Derry and Belfast, and areas of particularly deprivation (economic, education and health) that seem to remain largely untouched by government policy or initiatives?