There is a gap of roughly £10bn between tax revenues and public expenditure in Northern Ireland, an effective subsidy from Great Britain to Northern Ireland that is often referred to as the “subvention” or the “block grant”. If this gap was to be funded entirely by the existing Irish state it would place a severe strain on the country’s finances, necessitating tax rises or spending cuts in a country that is still recovering from the financial crisis of a decade ago.

The question of finances could have a huge impact on a potential border poll south of the border. A 2017 RTÉ poll found that, excluding “Don’t Knows”, a poll on Irish unity given an extra €9bn annually on public spending would be essentially tied. The prospects of the southern electorate approving Irish unity in a border poll could boil down to the question of whether it would be financially affordable.

The chart at the top of the page shows a breakdown of the different types of public revenue and expenditure for the fiscal year 2015-16, the most recent year for which complete data is available (I have made a couple of adjustments to the ONS’s figures, such as deducting VAT refunds from VAT revenues).

So, would the southern taxpayer be on the hook for the entire amount in the event that Northern Ireland was to join the Irish state? The chart below shows the same revenue and spending data as above, but has been converted into euro. 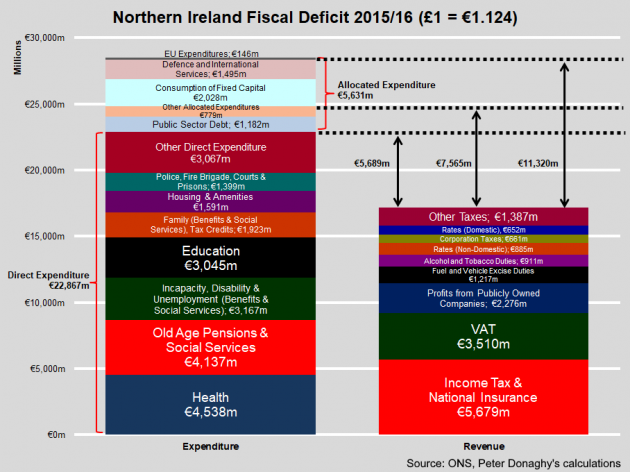 The extent to which a potential unified Irish state would be on the hook for these allocated expenses is hard to gauge with any certainty. Take Defence, for example. Currently, Northern Ireland’s share of the UK’s defence budget, the Foreign and Commonwealth Office, and similar items is around €1.5bn. With no nuclear deterrent and significantly lower defence spending per capita, much of this expense could be freed up for other purposes. It would be expected that a unified Irish state would be a net beneficiary of EU funds, so you would expect that the €146m sent to the EU would be another saving.

“Consumption of fixed capital”, or depreciation of government assets, is another potential saving. This isn’t a cash expense, as it represents the deterioration in value of the government’s assets. The €2bn in depreciation of government assets is quite high (for comparison, the Republic posted €3.7bn of depreciation in 2016 despite a much greater population). Some of the value of consumption of fixed capital for Northern Ireland represents assets held by the central British government, and in the event of sovereignty transferring from the UK to Ireland, this value is likely to fall substantially.

So, if the bill for Irish unity for southern taxpayers was €7.6bn per year, would this be affordable? This is obviously a substantial amount, but in the context of the current Irish fiscal deficit (which has fallen from €21.9bn in 2011 to €1.0bn in 2017), it doesn’t appear insurmountable.

The big question would be the amount of support available from external sources, which is a euphemistic way of questioning the extent to which the EU would be willing to put their hands in their pockets. It would seem unlikely that the EU would be willing to foot the entire bill. Were the EU to foot the entire bill, this would represent a bill of over €53bn for the seven year budget cycle, which would put a hypothetical new Irish state as the second largest beneficiary of EU funds for the 2014-20 funding cycle, between Poland (€86bn) and Spain (€40bn).

There are a number of ways in which revenue could be raised locally. Equalizing the rate of VAT across the 32 counties at 23% could raise half a billion euro. More controversially, equalizing Corporation Tax rates at 19% could theoretically raise €4.3bn, although such a sharp rise in Corporation Tax rates could induce some Ireland-based companies to move their tax domicile elsewhere. Ireland’s Corporation Tax receipts are volatile and highly concentrated; 40% of these revenues are paid by only 10 companies, the majority of which are US multinationals.

There could be efficiency savings from Irish unity on the expenditures side, too. For example, at present the Irish government spends substantially more per capita on healthcare (€3,180) than the government spends on health in Northern Ireland (€2,400). The economies of scale of running a larger all-Ireland healthcare system could potentially lead to lower costs.

There is little doubt that, in the short run, a unified Irish state would place a financial burden on Irish taxpayers. The amount of pain would be largely defined by how much the EU, and perhaps other external parties, might be prepared to help shoulder the burden.

The economy of Northern Ireland, in terms of GDP per capita, is further behind the Republic today than was the case between East Germany and West Germany in 1989. Bridging the two Irish economies in a newly unified state might take decades, as was and continues to be the case in Germany. But there are few Germans today that argue that unification wasn’t worth the expense.