Methodist minister Rev Dr Laurence Graham addressed the Sinn Féin ard fheis during the two hour ‘live session’ which is broadcast on RTE. Every three minutes another party representative steps forward from the queue at the side of the stage to deliver their speeches from the autocue before some short applause and the cycle beginning again.

Twentieth in line was the minister and former Methodist President who first met Michelle O’Neill when she attended an event with Arlene Foster at Castlewellan Castle last summer. 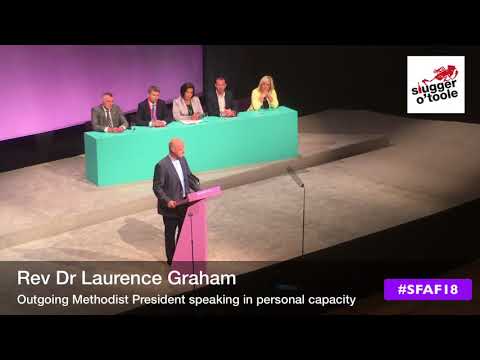 Graham follows in a long line of annual speeches by protestant and unionist voices on the topic of reconciliation and healing. Minster of 1st Derry Rev David Latimer spoke at the 2011 ard fheis, the last time the party visited the Belfast Waterfront. Revs Martin Magill and Steve Stockman spoke in Derry in 2015.  And Prof Pete Shirlow popped up last November in the RDS.

“Reconciliation is not a project but a process that never ends,” Graham said, adding “These are personal remarks, I don’t speak with an official position of the Methodist Church in Ireland or any other group.”

“The first one is a personal challenge to every single citizen … I would challenge every single person to make a point of going and looking for somebody that you know you will disagree with and have a coffee with them … Take time to get to know them. The aim of meeting isn’t necessarily to come to agreement, but just to get to know the person who you disagree with. It’s still all easy in this land to spend our whole lives among people who we agree with. And a segregated community where we only know people that we agree with will never be reconciled. It’s only as people from the other side become people that we know personally that the fear of difference can be removed.”

He described his second challenge as “corporate”, aimed at Sinn Féin as a party.

“We can’t forget our past. But if healing and reconciliation are to come then we ned to find ways of remembering without celebrating, of commemorating with glorifying … One thing that everyone can agree on is that there was no military victory for anybody. Clearly many were killed and injured on every side. And clearly every side will want to commemorate and remember. But when that is done in a glorifying, celebratory, victorious way then it hinders reconciliation and it increases pain instead of fostering healing.

“Furthermore, as we remember we must also examine ourselves as to whether we need to apologise for wrong things we have done, even if we continue to believe they were done for the right reasons. And so if we regret any of the means we used in the past, then we should express that regret, because words of apology and regret can play an important part in opening the door of reconciliation and healing.”

The final challenge was applicable to Sinn Féin and the other parties in Northern Ireland.

“During my year – which has just finished – as President of the Methodist Church in Ireland, I’ve had the opportunity to speak with political leaders of all persuasions. And you know what? I’ve heard them all say that they want the same thing. Namely, the betterment of life for all people in this society …

“So I would urge you and all the other parties to unite around on what you agree, which is that you want the best for all people. Get on with doing that. Start working together on issues that matter to people, and let the issues of sovereignty and so on which divide us follow in due course.

“I want to finish by referring to a conversation recorded in the Bible … recorded in John chapter 4, between Jesus and a Samaritan woman he met at a well. And when they first met they were separated by gender, by culture, by religion, by politics, and by history. Because he was a Jewish man and she was a Samaritan woman. And yet the encounter which they had at that well changed her life and, in fact, led to the transformation of the whole village and the surrounding area.

“But you know how it began? It began when Jesus asked the woman to help him get a drink from the well. In other words, uniting around working for the essentials of life was the beginning of a process of healing and reconciliation.

“And so I pray that all the political parties here can unite around their common desires for the betterment of life for all people and start working together on these issues even as disagreements on issues of sovereignty and history may persist.

“People reconcile as they work together.”

Sticking to his script, Graham delivered suggestions that were met with a standing ovation. Nothing controversial, yet a message from outside the republican