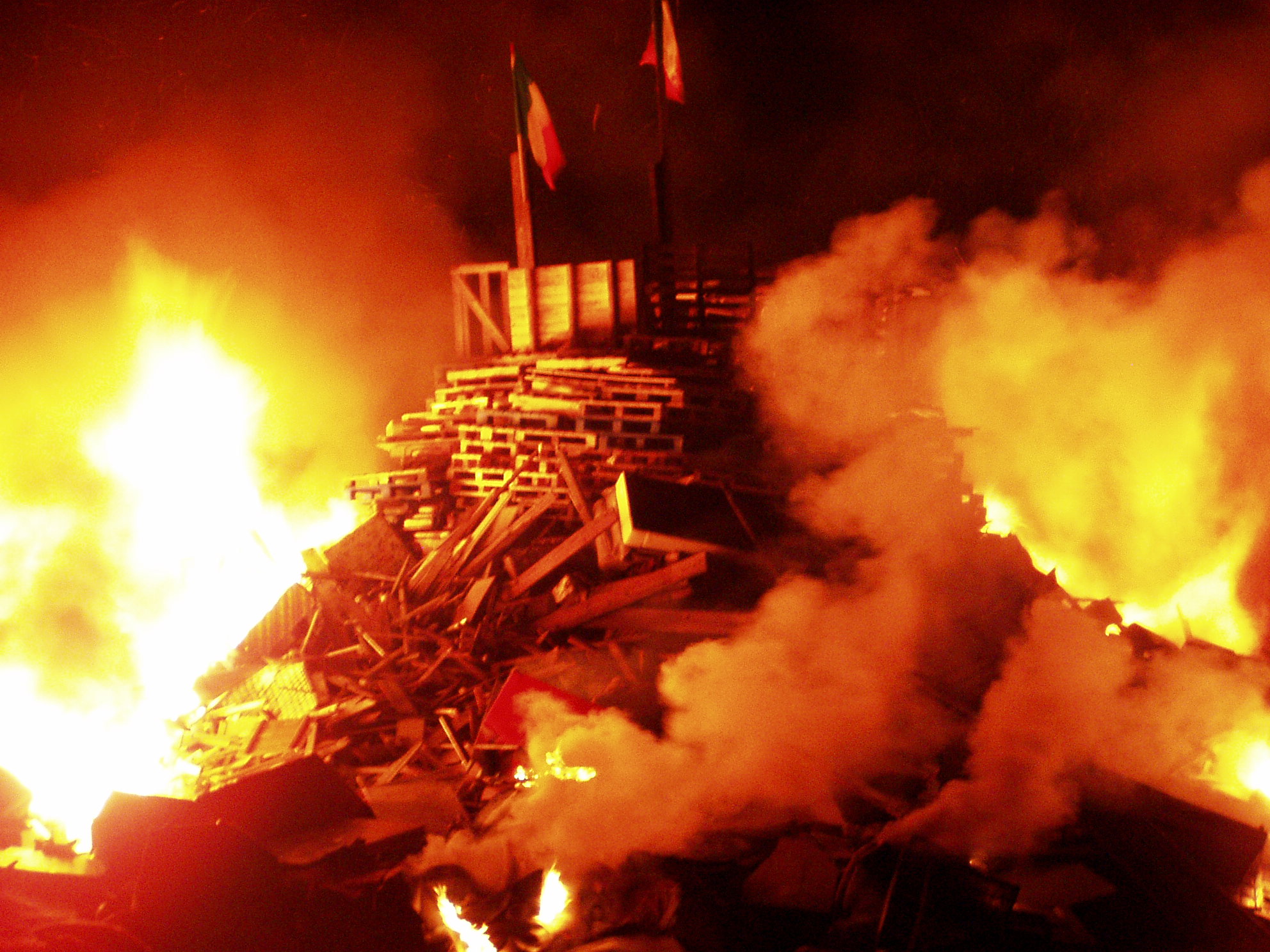 I remember back in  the day, probably around Easter 1971, my pal and I threw down two sticks on an area of open ground in Tyndale Gardens in Belfast and said ‘That’s the boney started.’ Other kids probably do the same thing around the same time of year to this day.

There were no pallets then and no tyres. We collected waste wood and the ‘big lads’ cut branches off trees in neighbouring Carrs Glen. I often think about that and hope the glen has recovered from our predations – pallets mightn’t be a bad thing if it means people leave trees alone. Every street had a fire and we competed with other streets to have a bigger and better one. Once the school holidays began some of the older kids slept out at the Boney to stop people pinching the wood. The fire, when it was finally lit, was a pygmy by today’s standards, maybe no more that fifteen feet high. We were allowed out late, tried to bake potatoes on small fires around the main one and cadged sips of beer from the bigger lads or swept up discarded beer bottles for the suds in them. The fire was built by children and adults only came into the picture in the final hours. No cranes or vans delivering material were involved. Effigies, of Bernadette Devlin and Gerry Fitt, I recall, were burnt on the fire.

There was nothing idyllic about it but no one had heard of health and safety. I gashed a knee and still bear the scar from a fall on a piece of wood that had a protruding nail.  I inadvertently split another boy’s head, a Catholic as it turned out, when I launched a brush shaft, spear-like into the boney, not knowing he had built a little hut inside it. His family was forced from his home a few weeks later when things got really nasty around the introduction of internment. He went one way and my aunt and uncle, similarly given a few hours notice to leave their Oldpark Road home, came the other. I remember the stoicism on my aunt’s face as she arrived, sat on the back of a flatbed coal lorry clinging onto her furniture. Thousands, living in the ‘wrong’ area suffered similar ordeals.

A couple of years before that in July 1969 I remember another fire at the end of a terrace in either Dundee or Aberdeen Street just off the Shankill Road, where again, a modest fire by today’s standards, was blazing against the gable wall of a house while fireman hosed the wall to keep it cool. I remember thinking the inside of the house must have been like an oven and could not, as a seven year-old going on eight, understand why they did not put the fire out. Now of course I do – bonfires are semi-sacred things and the authorities interfere with them at their peril.

The reason for this little wander down memory lane is to show that many of the issues surrounding bonfires are not new. What has changed, in my view, is the involvement of adults to make the fires enormous and hence more dangerous, and the changing face of Northern Ireland. The Catholic/Nationalist population has grown in size and assertiveness and is less likely to tolerate sectarian displays and people expect local authorities to keep roads clear and property safe, and object to public money being used to repair the same roads and street lamps melted by fire each year.

I opted out of ‘unionist culture’ over twenty years ago after seeing a woman in a union jack dress shouting a foul-mouthed sectarian tirade at a 12th July demonstration while the police stood by and did nothing. Parades like bonfires, are semi-sacred things and the authorities interfere with them at their peril. Once she was finished screaming obscenities about the Pope, a crowd of drunks followed at the side of the street singing about Fenian blood, swearing, drinking and pissing their way along. Call me elitist if you like but it’s not my cup of tea.

This is not an attack on a whole people or culture, which is now semi-sacred, but rather an attack on a loud and aggressive minority who inflict themselves on everyone else. Just like the past, we still have boorish louts who use culture as cover for their own selfish and irresponsible behaviour.

There are people out there doing good work to make such celebrations safer and less contentious. The tragedy is of course, that such people are needed at all. Is it really too much to ask people not to burn effigies or place fires near houses or not to burn tyres that give off toxic fumes? Why is that somehow seen as oppression or waging cultural war?

Times are changing and I look forward to the days when we don’t have this annual debate and if that involves public funds being used to set aside safe, designated sites so be it. I really hope I’m wrong, but I fear it won’t be for a decade or two yet.