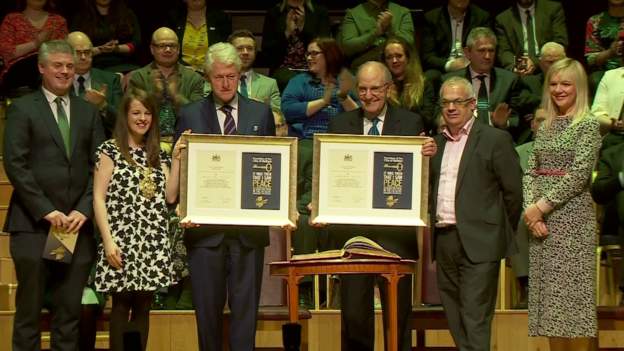 Will the DUP and Sinn Fein pay any attention to the eloquent pleas of the elder statesmen to return to the Executive?  On the surface the answer appears to be no, unless something is going on behind the scenes we don’t know about. Local politics suffers from elder statesperson fatigue. This generation has learned how to take in their stride the high sounding generalities from popes, presidents and prime ministers past and present.  The shock of the new wore off long ago. The eloquence had a flavour of fighting the last war about it.  Nobody wanted to get down to detailed analysis for fear of spoiling the party.

As for the British and Irish governments, it is hard to imagine them being able to agree a programme of action on the future government of the North unless the border problem is sorted or at least disarmed as an incendiary device by October if not by June. I see no possibility at all of Theresa May and Leo Varadkar taking the bold lead  that Blair and Ahern are urging on them unless they can wrap  the restoration of  Stormont into a border agreement which sounds great but unlikely. Weak UK government internal coordination  is exposed when Brexit secretary David Davis ” insults” Varadkar  in London while at the same time Karen Bradley the NI Secretary exchanges warm words with foreign minister Simon Coveney in Belfast.

After the embarrassment she suffered twice at DUP hands in jumping the gun over agreements on Stormont and EU withdrawal terms, this  normally  most  cautious  of prime ministers is unlikely to make the same mistake a third time.  While the outlines of a dual deal are faintly visible, Banquo’s ghost in the shape of EU 26 would be the spectre at a purely bilateral feast and they would have to be fully involved.

For me the most interesting comment came in an off- the- cuff answer to questions at the Lyric Theatre from foreign minister Simon Coveney.  It came in a report by Amanda Ferguson in the Irish Times under the headline: “Tainaiste would like to see Fine Gael in North election in the future.” She fed him the line so it could be “clarified” later as other statements of  Coveney have been. But she writes:

Micheál Martin said recently that standing in Northern elections is a target for Fianna Fáil.

When asked whether Fine Gael had similar plans, Mr Coveney said: “I think there is a huge interest in Fine Gael in what happens in Northern Ireland.

If  the three main parties in the southern state  shared among  them the   majority of nationalist  votes in the North it would mean  that   Dail politics and the interests of the south would dominate Northern nationalist politics and  the North would play a major role in southern politics, with incalculable results  in both jurisdictions.

If they eventually won more votes than unionists in the North, the Republic would hold the future of the British Union in their hands.  Do either Fianna Fail or Fine Gael see unity as a winner? Would Fine Gael and Fianna Fail/ Sinn Fein split over unity or make common cause?   And would the Republic’s voters welcome immersion in northern affairs or prefer the existing arm’s length?

One way or another, the Republic is being drawn further into the affairs of the North. Ironically, Brexit will increase that involvement. Through the GFA framework it will be the only route to make Brexit work effectively.  If the DUP ever thought otherwise, they and their supporters will suffer massive disillusion. What we can’t tell is how it how far greater southern involvement will extend and how it will affect the cause of severing the British link. What we do know is that unionism will have to raise its game.

At least it gives us something nearly new to think about.

Meanwhile we have eloquent re-statements of familiar  themes.

I’d like to make a minor re-statement of my own. A couple of days ago I posted a piece I entitled  A noble illusion perhaps, but unity and reconcilialtion are not compatible.   This may have created the wrong impression. I was contesting  Robin Wilson’s article in the Irish Times, rejecting the idea of a border poll any time soon but calling for progressive alignment between north and south until the point was reached when unity seemed  the natural outcome. That would  require  “the organic fading of the British link.” I simply ask: why cut the British link when under the GFA everybody has  most of what they want? Why not have the best of all worlds? If you do cut it, you risk the very development of  greater  north -south links you desire by turning them into  pieces in the ultimate zero sum game. Why not stick to the GFA framework?

Robin too easily makes the assumption of a wretched future under Brexit. I say let’s wait and see.  I should have struck a different headline:  “But why cut the British link”?

Arlene Foster’s  latest remark is hardly an expression of confidence in her own cause. It may become as perversely memorable as “crocodiles”. Has she the imagination and the authority   to change what the cause is about?

In an interview with Patrick Kielty, about the 20th anniversary of the Belfast Agreement, Arlene Foster was asked about Irish unity. While saying it was all “very hypothetical”, she still gave a serious and important answer: “If it were to happen I’m not sure that I would be able to continue to live here, I would feel so strongly about it. I would probably have to move.”

Ten years ago, maybe even five, no unionist leader would have answered the question, let alone given that answer. But Foster knows, as do many within the leadership of the Protestant/unionist/loyalist/orange communities, that the dynamics have shifted. The once-unthinkable needs to be thought about.

A unionism which isn’t inclusive, embracing and equality-focused is a unionism with a limited shelf-life.

This is, possibly, the most important moment in modern Sinn Féin’s – post 1970 – history: if they can’t secure a Border poll in the next five years, secure endorsement for unity from the Irish Government (and opposition parties) and actually deliver what they’ve been talking about for 50 years (and one of the primary reasons they gave the nod of approval to the Belfast Agreement), then it will be at least another generation before another “moment” comes.

It’s a pity Mike Nesbitt is out of it. Can he yet reverse the UUP trend to tack to the right of the DUP?

A little bit of history from Paul Bew is always welcome.

In fact, as far as political structures and principles are concerned, there is very little ambiguity in the Belfast Agreement…. it was to be de-commissioning, prisoner release and police reform which polarised relations.

At the core of the agreement is its statement that people born in Northern Ireland have an absolute right to be “Irish or British or both as they may so choose”. We have here, written down in a binding international treaty, a recognition that national identity is not a territorial or genetic imperative, and is not necessarily a single thing. It is chosen, and therefore open to a change of mind. And it can be multiple: those six letters – “or both” – are the glory of the agreement, its promise and its challenge.

The agreement tries to replace either/or with both/and.

What we did not imagine 20 years ago was that the pursuit of a pure identity would return as a governing project – not in Northern Ireland, but in England. We could not have foreseen that the euphoria of victory would animate politics on these islands again.