This is the fifth in a series of posts from this weekend’s #Agreement20 conference in Manchester, an external antidote to the recollections and analysis of talks process insiders who will attend events organised by QUB and the British Council this week in Belfast.

One of three parallel panel sessions on Saturday morning looked at the Good Friday Agreement and responses to alternative identity concerns. 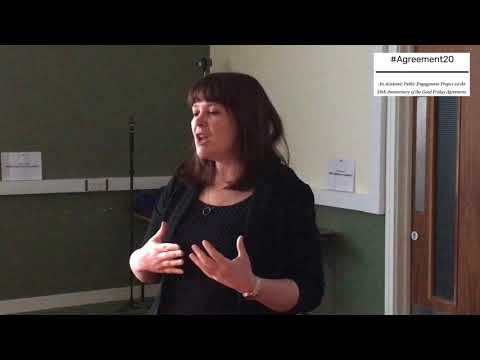 “We need to provide a framework for the inclusion of women in peacebuilding in NI and the UN peace and security framework [can be used] to tackle gender-based violence and gender security issues in NI. At the same time we need to use a heavily contextual approach to look at the structures that are impeding women at participating in peace building otherwise we simply have the idea that women have the right to participate in peace-building and it’s their duty to include themselves.”

Dr Fiona Bloomer (Ulster University) spoke about “Abortion in NI: the forgotten ‘rights’ issue in the Good Friday Agreement”. As well as summarising the legal and medical situation in NI, she referred to how the language of politicians in the NI Assembly has changed when they refer to women seeking abortions. The majority of her presentation focussed on a trade union study across Ireland asking whether abortion was a ‘workplace issue’, the first study of its kind in the world.

“They’d had anecdotal reports of women returning to work too soon or experiencing stigma in the workplace and they wanted to know if there was clear evidence of this.”

The study included the operation of a discussion forum and while a wide variety of views (from pro-life to pro-choice) were expressed, the researchers noted that “at the end of the research process some participants articulated that they had acquired new insights or formed new views having taken part in the forum” and they have begun to use contact theory to examine the changes in insight into the issues and recognition of other viewpoints.

Dr Noirin McNamara (Queen’s University Belfast) discussed how communities tackle Female Genital Mutilation as an example of some of the inequalities and barriers which impact on newly arrived communities in NI. A recent study had set out to estimate the number of women and girls in NI affected, or potentially affected, by FGM in NI and identify appropriate service provisions. The study found a lack of data and guidelines as well as a need for further training and a more comprehensive strategy for data collection. They recommended more of a focus on the support, care and protection for women and girls at risk as well as for survivors of FGM.

Noirin stayed on her feet to deliver a paper written by Danielle Mackle (Ulster University) who couldn’t attend the conference. “Fitting into place: the LGBT community’s journey to equality in NI in the wake of the Good Friday Agreement” used data from a PhD study of the human development and wellbeing of the LGBT community in NI to discuss the impact of equality legislation and practice, and highlighted the gaps that remain in equality legislation, policy and practice.