This is the third in a series of posts from this weekend’s #Agreement20 conference in Manchester, an external antidote to the recollections and analysis of talks process insiders who will attend events organised by QUB and the British Council this week in Belfast.

Ulster University’s Dr Máire Braniff delivered Saturday’s keynote address at the conference, with her session titled “Progress in Paralysis: Change and Continuity in post-Agreement Northern Ireland”. She noted that while paralysis means there is no movement, other functions do continue. 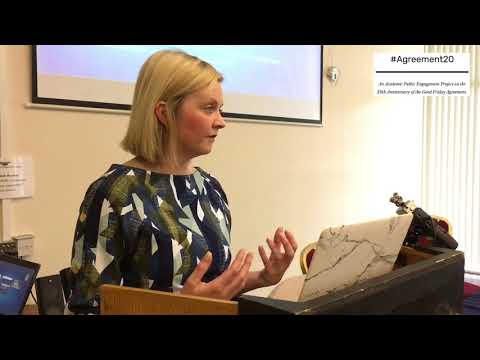 “At this point in the political discussion we’re very familiar with this fixed set of diagnoses of what this impasse in Northern Ireland is. My undergraduate students are three years into their degree: they’ve spent two thirds of that degree without a functioning government … I ask them what they want to be after they graduate in July and the first thing they say to me is ‘a politician’. Why? ‘’You don’t have to turn up, you don’t have to work, and you still get paid for it!’ So that’s the culture of understanding around what politics is 20 years after the agreement.”

The director of UU’s International Conflict Research Institute (INCORE) noted that the NI peace process has benefited from significant international financial investment – £6 billion since 1994 – unlike most other peace processes around the world at the same time.

While it’s had its benefits, Máire suggested that there have been significant challenges around political leadership and “the spirit and promise of the 1998 Agreement has been firmly cast aside and disrupted by the processes of peace-building”.

She called out the continuing patriarchy in NI politics and asked who pulls things back together when they fall apart in NI? Are we chasing an elusive concept of peace that we don’t fully understand? Why is there such an absence of the words ‘reconciliation’ and ‘healing’ in public discourse? Section 75 has been weaponised.