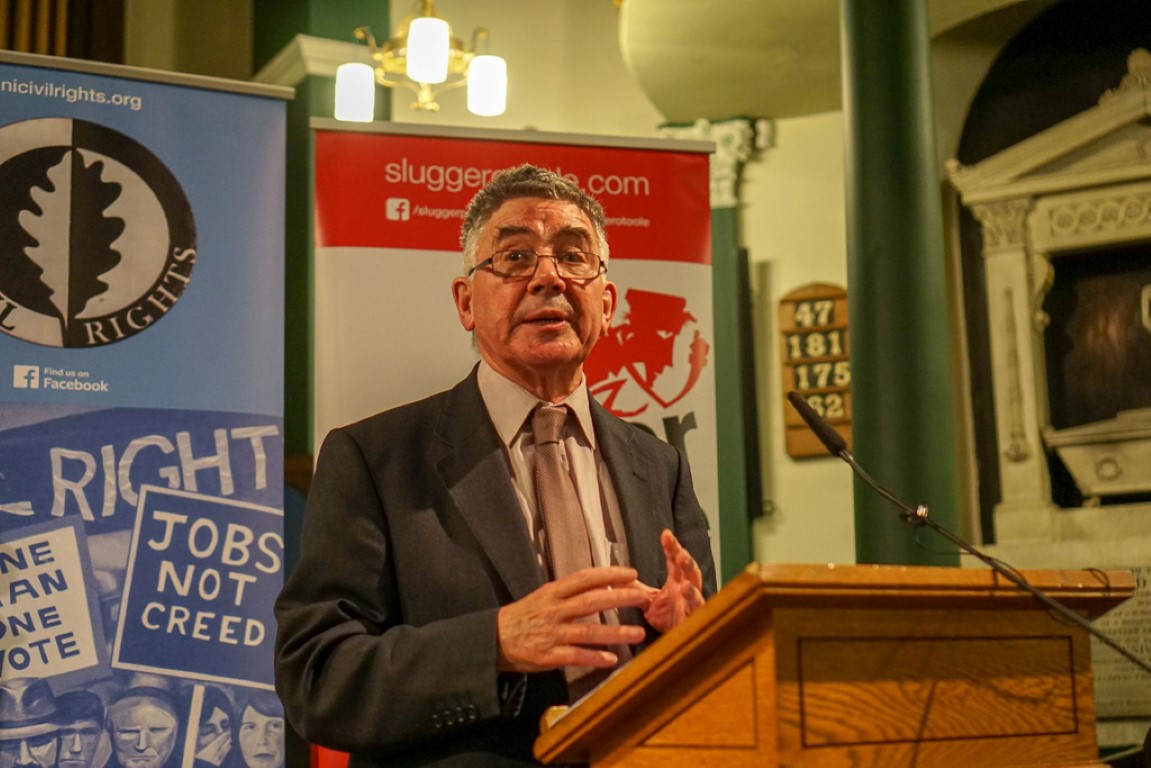 Commemorations should carry their own health warning. Fintan O’Toole supplies one relevant to the current context. Writing in the Irish Times in January 2005 on the extremist tradition in Ireland he warned that ‘what matters is not what happened but how it is remembered. And that precisely is what the IRA is now fighting for. Its struggle is for the control of the memory of the Northern Ireland conflict’.

I was reminded of this reading Declan Kearney’s piece of 29 January. It manages to elide history and to conflate two distinct propositions – civil rights and the armed struggle. The campaign, he writes, ‘was inspired by the Campaign for Social Justice, and also directly by the strategic decision of the IRA and Sinn Fein leadership at that time’.

What the Mc Cluskeys aspired to was the realisation of justice by peaceful means within the United Kingdom. Theirs was one of many groups that sought reform through non-violent civil resistance. Within Stormont the Northern Ireland Labour Party had been pressing for a rights-based agenda from 1958 onwards. Kearney is correct in stressing the broad based alliances that were formed in the mid-1960s to pursue that method and it included trade unionists, communists and many non-aligned groups such as the Homeless Citizens League founded in Dungannon in 1963 as well as the republican leadership.

Where he is incorrect is the distorted political message he derives from this formation. For some reason he finds it necessary to take a pop at the SDLP which had not been formed at the time. Precisely the same could be said for the organization that he heads now. The Provisionals arose out of an Extraordinary Army Convention held in the middle of December 1969. One of the crucial resolutions debated was that the Republican movement should end its policy of parliamentary abstention.

That was a bridge too far for some because Republicans ‘had now to choose between accepting the institutions of partition or upholding the basic Republican principle of Ireland’s right to national unity’. If these proposals were passed it would ‘reduce the IRA to a cog in a Marxist political machine’. The source for these stirring words? None other than Sean MacStiofan, the first Chief of Staff of the Provisional IRA in his Memoirs of a Revolutionary.

That’s why it is important to separate the civil rights campaign from the armed struggle in this the seventieth anniversary of the signing of the UN Declaration of Human Rights. Civil, social and political rights were for all and Irish unity was not part of that agenda. In this the fiftieth anniversary of the Coalisland-Dungannon and Derry marches it is incumbent on all of us to adopt the practice of ethical remembering, to be reflective and to be inclusive.

While the Sinn Fein leadership may have organized eight meetings across the north in three weeks in January others have not been standing idly by. Our committee has been involved in a similar exercise that goes beyond Sinn Fein’s pursuit of civic nationalism. We have met in private with members of the PUL community and together with Linda Ervine we have hosted a public event in East Belfast with the  Grand Secretary of the Orange Order Rev Mervyn Gibson and PUP Cllr John Kyle.  Our official launch was in Rosemary Street Presbyterian Church, itself symbolic of an earlier age of revolutionary fraternity. Our keynote speaker, Michael Longley, has been a wonderfully articulate witness of the trials and travails of the past half century and always with the capacity to appeal to ‘the better angels of our nature’.

The narrative that has to be developed in the coming year needs to move beyond the depressing binary of them and us. We can learn some of the lessons of the conduct of the Decade of Centenaries – so far so good, so sensitive but with much more difficult unfinished business to come. We can acknowledge the complexity of our entwined history, what John Hewitt called the crazy knot.

We need to face current challenges such as spatial segregation, racism, sectarianism and the challenges facing the LGBT community, migrants and travellers.  We need to see this in the context of deeply polarised global politics. An adversarial approach is not appropriate. Instead we should be prepared to recognise past failings. So what we need is a dialogue embracing empathy and inclusion.