As the BBC reports

Sinn Féin has confirmed that one of their MLA’s has removed a clamp from the front wheel of his car, using what appears to be bolt cutters, in Belfast.

In a statement, a spokesperson for the party confirmed that Gerry Kelly removed the clamp at about 07:20 GMT on Friday outside a gym.

A recording of the incident has been posted on social media.

The footage was captured in the Exchange Street area just behind the public art gallery and theatre, The MAC.

Cars can be seen parked in a yellow box on a strip of land alongside the building. The yellow box has painted across it “no parking” while there are signs on the wall saying “private parking only”.

A spokesman for the MAC said parking on the piece of land was enforced by a private company. It said it needed the area free for loading and in case of emergencies.

“Access to a public building such as the MAC is essential, for shows, exhibitions and, most importantly, emergency vehicles. This area is clearly marked as a no parking zone, and there is signage in the area,” a spokesman said.

It also said as it was a public building, it required the space free for emergencies.

The parking enforcement company PEA said in incidents such as someone removing a clamp without authorisation a report would normally be made to police.

“PEA is aware of this incident and has reported the matter to the PSNI as we do in all such cases,” a spokesman said. [added emphasis]

Mr Kelly can be seen bending down to unwrap the chain from around the front right wheel of a silver vehicle parked on a hatched box.

A STOP notice had been slapped on the driver’s side window of the car.

While the wheel clamp is being removed a pair of bolt cutters can be seen on the ground next to the vehicle.

Witnessed by some passing workmen… 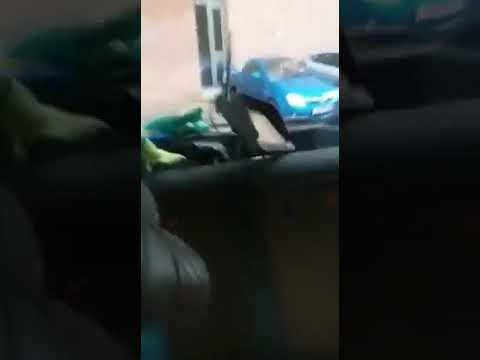 And the Sinn Féin press release

“Yesterday, Friday 2nd February, Gerry Kelly MLA returned to his car after an early morning gym session to find that his car had been made immobile by a clamp just after 7.20 am.

“He removed the clamp from the front wheel. He left the device nearby and drove off to pre-arranged meetings.

“His solicitor is dealing with the matter and he will be making no further comment at this time.”