Ann Allan was born in Rostrevor, Northern Ireland in 1949. She moved to Belfast in 1966 where, in 1970 in the midst of the troubles she married across the religious divide. She serves on the #OpenGovNI steering committee.

Some time ago Ann started writing a series of her ‘Memories’ for her own website ‘Chatter’. Many of these have now been converted to video and paint a vivid picture of growing up in Northern Ireland during a turbulent period.

The latest video is available to view here: 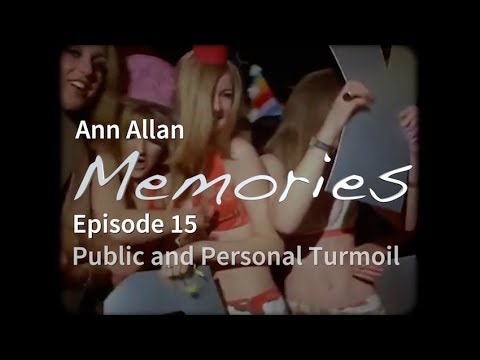 We asked Ann to explain her motivation for writing the series and creating the subsequent vlogs.

Some years ago after a period of depression, I started a family tree. I sat for hours tracing each family line, purchasing birth and death certificates, looking up wills on the internet and over a period of ten or so years listing over 500 ancestors. It is a never-ending project. I was able to build up a picture of what life was like for some of those ancestors but there where huge gaps.

My mother had written a short account of her time in London during the war and it captured a period in her life that few knew about. I published it on my blog. (The Arrogance of Youth by Patricia Cole).

I had shown her a couple of articles that I had written in the early nineties, two of which became part of my Memories and she had encouraged me to write more.  However, they ended up in a drawer and were only unearthed when I was asked to write for the now defunct blog, Vixens with Convictions.

After the great reaction to one of my blogs about my coming to East Belfast I thought when I die my early life story will go with me. Not only had I married during the troubles but I’d married a Protestant. I wanted my grandchildren to know how I was strong and stood my ground and despite all the opposition married the person whom I loved.

I wanted them to know I was feisty, funny, mischievous and adventurous, travelling to France when I was 16 and to London at 18. I also wanted them to know that the troubles were a horrific time but those of us who stayed in Northern Ireland helped to keep some normality in a country that was anything but normal.

After I had written 22 episodes I had the idea of adding video; bringing the stories to life. My great friend Olive Buckley – who sadly passed away in September 2016 – suggested her partner Gary would be able to help me. We are now on chapter 15 with chapter 16 coming soon and the vlogs have had over 11,000 views.