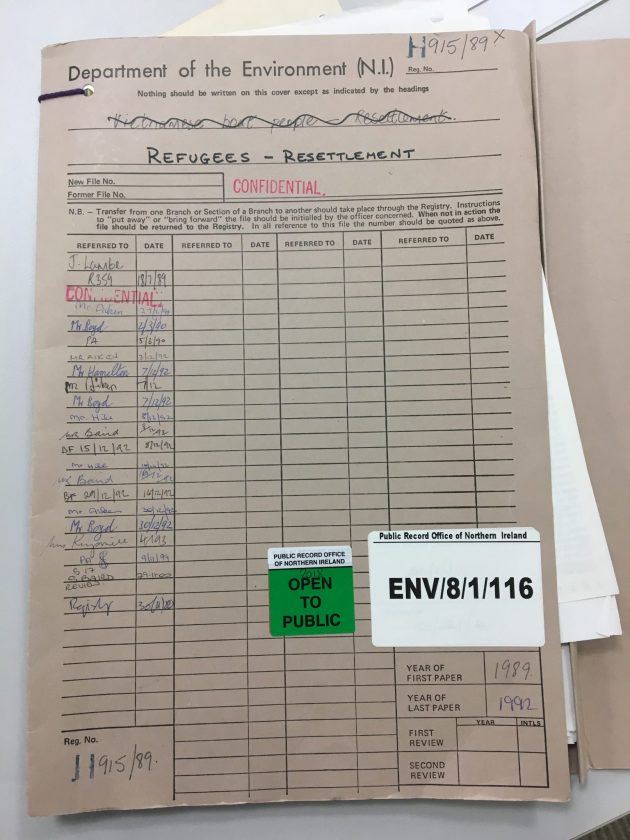 Between 1989 and 1992, local civil servants responded to two requests for Northern Ireland to offer accommodation for refugees from two regions of the world: Vietnam and the former Yugoslavia.

During 1979-1981, approximately 60 Vietnamese families were resettled in Northern Ireland, with two thirds of families concentrated in the Craigavon area. Less than twenty years later, more than half the families had left Northern Ireland.

A file released under the 20 Year Rule and now available to view in the Public Records Office in Titanic Quarter – ENV/8/1/116 [selected scans] – includes correspondence from 1989 and 1990 stating that the Vietnamese families “found it difficult to integrate into the community but they have not been a source of problems”. Reportedly, similar settlement difficulties and movement away from original placement areas was experienced across the rest of the UK.

In December 1988, Home Secretary Douglas Hurd and Foreign Secretary Geoffrey Howe proposed the resettlement of a further 1,000 Vietnamese in the UK over two and half years:

NI officials believed that “the Housing Executive would be able to accommodate without much difficulty a further modest consignment of Vietnamese families and that they would be willing to do so”. Craigavon – an area with a good supply of housing – was once again proposed.

Minister of State Richard Needham was, as ever, a beacon of hope, a politician whose glass was perpetually half full. The newly released file reports that he believed “of all the immigrant groups to the United States in recent years the refugees from Vietnam (who were ethnic Chinese) had been by far the most economically successful”.

“He fully agreed with our ideas that if more are to be sent to Northern Ireland they should all be placed in Craigavon … He would like to visit the Vietnamese community to see what they want and perhaps arrange contacts with local businessmen to stimulate the entrepreneurial spirit on both sides.”

Officials warned each other about making assumptions about community relations between ‘ethnic Chinese’ and ‘ethnic Vietnamese’:

“… it should not be assumed that the 2 races will get on together. A not unfamiliar story!”

The file does not indicate whether any new Vietnamese families were settled in Northern Ireland, and I can find no online record suggesting that NI ever welcomed anyone to its shores under this scheme.

Turning over the pages in the file, the story quickly jumps forward two years to November 1992 to a request to resettle Yugoslavian detainees from Bosnian refugee camps and their families in the UK.

Sentiment towards this resettlement is frankly less than enthusiastic with one official pessimistically feeling “that the question was ‘should we take any refugees judging by our experience of the Vietnamese boat people?’”

Another official “felt that our approach should probably be that we would not openly volunteer but stand by if necessary … He felt we should register (internally within Government) our willingness to take our share (and this presented in the positive) but that this should not be made public until it was established whether people were likely to want to come. The meeting concurred with this approach.”

This muted response was further reflected in minutes which record that a “bland” media ‘line to take’ should be drafted in case NIO ministers were door-stepped. The statement should recognise that “there were positive benefits in making an offer to accommodate the refugees but not publicly” and note that “Northern Ireland had a track record of good works in the charity field, in PR terms it was useful to say that NI is a nice place to come to”. 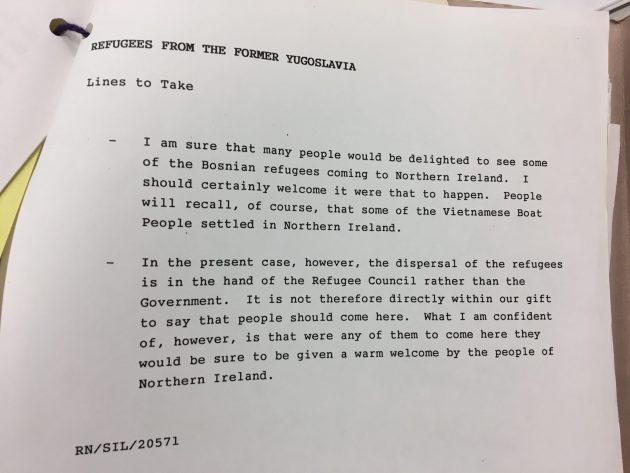 The statement once prepared adopted this aloof attitude, emphasising that the Refugee Council was charge of coordinating any dispersal in order to deflect from government responsibility.

“In the present case, however, the dispersal of the refugees is in the hand of the Refugee Council rather than the Government. It is not therefore directly within out gift to say that people should come here. What I am confident of, however, is that were any of them to come here they would be sure to be given a warm welcome by the people of Northern Ireland.”

Despite the reluctance to look too enthusiastic, officials did at least recognise that other departments needed to start preparations. Once more, I can find no record of Northern Ireland hosting these detainees and their families.

Twenty years later, the devolved administration was more enthusiastic and not so cautious. The Syrian Vulnerable Persons Resettlement programme has been in operation and by the end of October 2017 Northern Ireland had welcomed more than 630 Syrians.