Things just seem to go from bad to worse for the beleaguered leader of the free world. This week’s omnishambles is the revelation that the US Secretary of State Rex Tillerson called Trump a moron. NBC news reports:

President Donald Trump said he wanted what amounted to a nearly tenfold increase in the U.S. nuclear arsenal during a gathering this past summer of the nation’s highest-ranking national security leaders, according to three officials who were in the room.

Trump’s comments, the officials said, came in response to a briefing slide he was shown that charted the steady reduction of U.S. nuclear weapons since the late 1960s. Trump indicated he wanted a bigger stockpile, not the bottom position on that downward-sloping curve.

According to the officials present, Trump’s advisers, among them the Joint Chiefs of Staff and Secretary of State Rex Tillerson, were surprised. Officials briefly explained the legal and practical impediments to a nuclear buildup and how the current military posture is stronger than it was at the height of the buildup. In interviews, they told NBC News that no such expansion is planned.

The July 20 meeting was described as a lengthy and sometimes tense review of worldwide U.S. forces and operations. It was soon after the meeting broke up that officials who remained behind heard Tillerson say that Trump is a “moron.”

And to add to Trump’s misery most of the media discussion has been around did Rex Tillerson call him a Moron or a F’ing moron?: 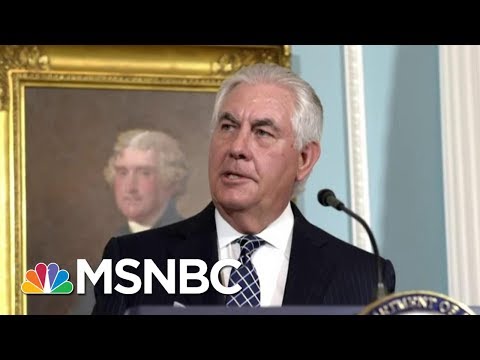 In response to the scandal, The Donald in true presidential fashioned challenged Tillerson to an intelligence test.

“I think it’s fake news,” Mr Trump told Forbes, “but if he did that, I guess we’ll have to compare IQ tests. And I can tell you who is going to win.”

Mr Trump had lunch on Tuesday with Mr Tillerson.

And for good measure today he is threatening NBC:

With all of the Fake News coming out of NBC and the Networks, at what point is it appropriate to challenge their License? Bad for country!

In other news, Donald seems to be preparing the ground to sack his Chief Of Staff John Kelly. Politico reports:

Pesident Donald Trump on Tuesday night rebuffed what he said was a news report claiming that his chief of staff “will soon be fired,” even though there appeared to be no such reporting by the national media.

“The Fake News is at it again, this time trying to hurt one of the finest people I know, General John Kelly, by saying he will soon be fired,” the president tweeted, without citing any media outlet.

For political junkies, Donald Trump is the gift that keeps on giving.