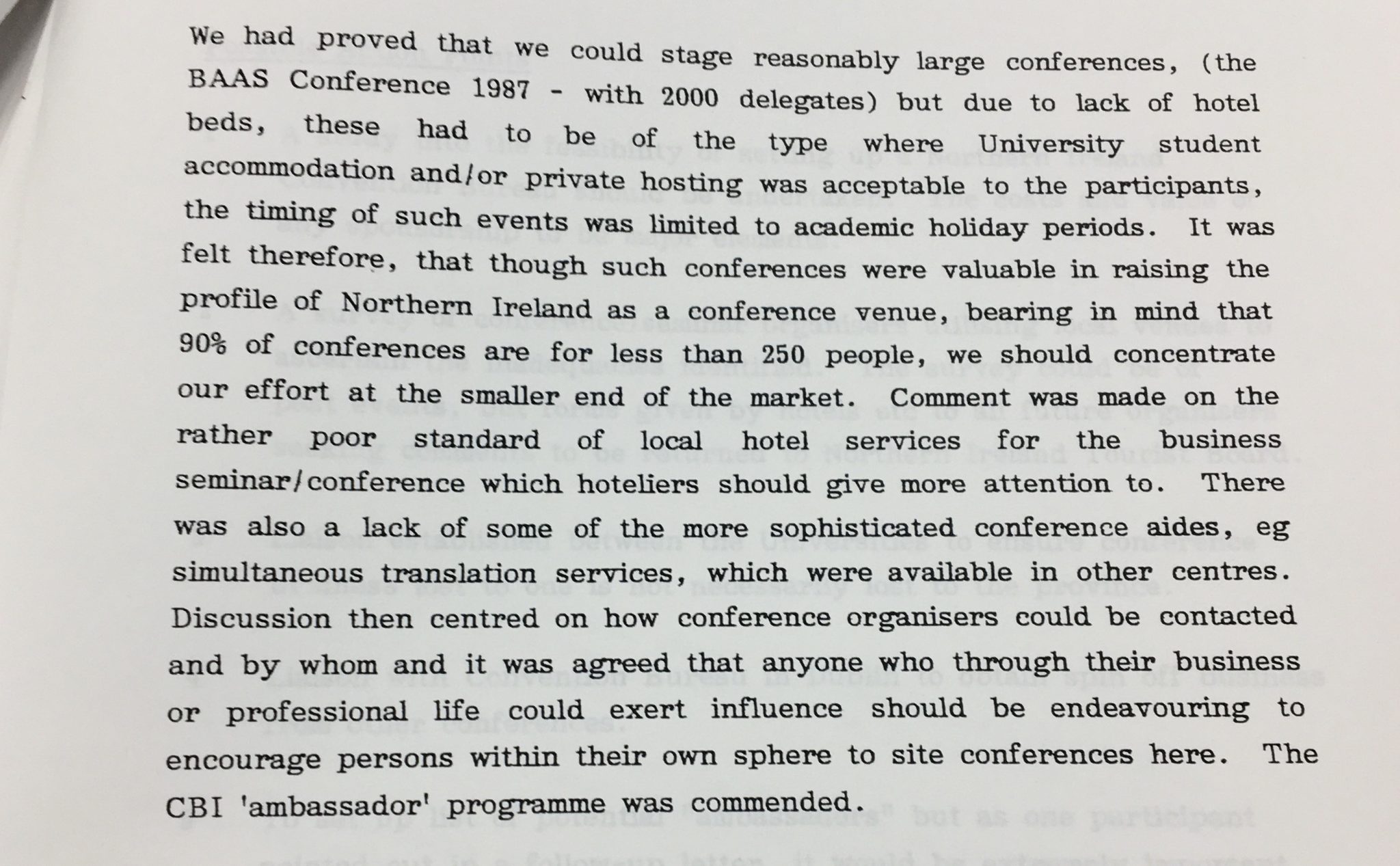 Back in 1989 the Department of Economic Development was conscious that Northern Ireland was not living up to its potential as a conference venue. Recently released under the 30/20 Year Rule and available to read in the Public Records Office, government file DED-3-747 [selective scan] details their plan to attract more conferences.

The Republic of Ireland had welcomed 65,800 delegates to 250 events in 1988 – valued at £35m – and had stated its plans to double the number of conferences within 4 years. Their Convention Bureau acted as a promotional body for the hotel, travel and higher education sectors.

It made innovative use of ‘ambassadors’, described as people of “‘real influence’ and include senior businessmen, academics, trade unionists, etc who are briefed (and sometimes given free air fares) before going abroad to encourage their contacts to bring conferences, seminars, and company meetings to the Republic”. Senior politicians lent their names to letters of support in conference bids.

DED recognised that conference delegates spent “far in excess of the average tourist”, estimated in April 1989 as a rather round £1,000 per delegate. 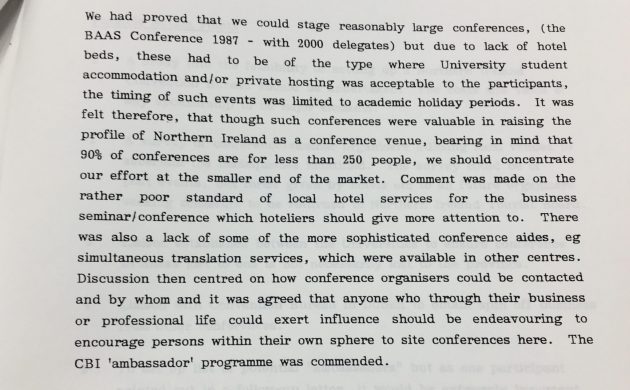 A résumé of a working breakfast meeting organised by the NI Small Business Institute and the NI Tourist Board notes that Northern Ireland’s largest event to date had been the BAAS (British Association for the Advancement of Science) conference in 1987, which attracted 2,000 delegates. “Due to the lack of hotel beds, these had to be of the type where University student accommodation and/or private housing was acceptable to the participants, the timing of such events was limited to academic holiday period.”

The minute records that feeling of those at the breakfast that “bearing in mind 90% of conferences are for less than 250 people, we should concentrate our effort at the smaller end of the market”. Comment was also made about “the rather poor standard of local hotel services” and the lack of simultaneous translation services.

Opinion differed on whether Belfast should have a major Conference Centre like other cities of a comparable size (who experienced difficulty making them economically viable).

The Department of Economic Development was invited to run a feasibility study into setting up an NI Convention Bureau, foster links between the universities so “conference business lost to one is not necessarily lost to the province” and to set up a list of potential ambassadors and briefing material for them.

It’s clear from a list of conferences from 1987-1989 that the two universities, and QUB in particular, were attracting and hosting the largest events.

Visit Belfast was formed in 1999 and its Convention Bureau for Belfast works across Belfast City Council, Tourism NI, Invest NI, local conference and accommodation suppliers and has a network of ambassadors.

In the 2016 calendar year, 74 conferences were held in the city of Belfast alone, and these are only the ones with which went through Visit Belfast’s books.

Those 74 conferences attracted in the region of 22,650 delegates who are estimated to have generated 74,000 bed nights and £32.5m for the local economy.

DED papers estimate that around 5,500 delegates were welcomed across Northern Ireland in 1987. Now four times that number come to Belfast alone.

While the number of hotel bedrooms distressed officials twenty five years ago, Belfast boasts around 3,500 beds today, with around a third more rooms expected to become available over the next couple of years.

Visit Belfast note that the Ten Square boutique hotel will shortly open an extension, and the doors of Titanic Hotel Belfast open early in September with 119 luxury bedrooms in the former Harland & Wolff headquarters and Drawing Offices. And on top of that, another thousand rooms will be available during 2018 with the opening of Hasting’s Grand Central Hotel on Bedford Street and new hotels by AC Marriott, Hampton by Hilton and Maldron.

All we need now are extra conferences to fill the bedrooms. 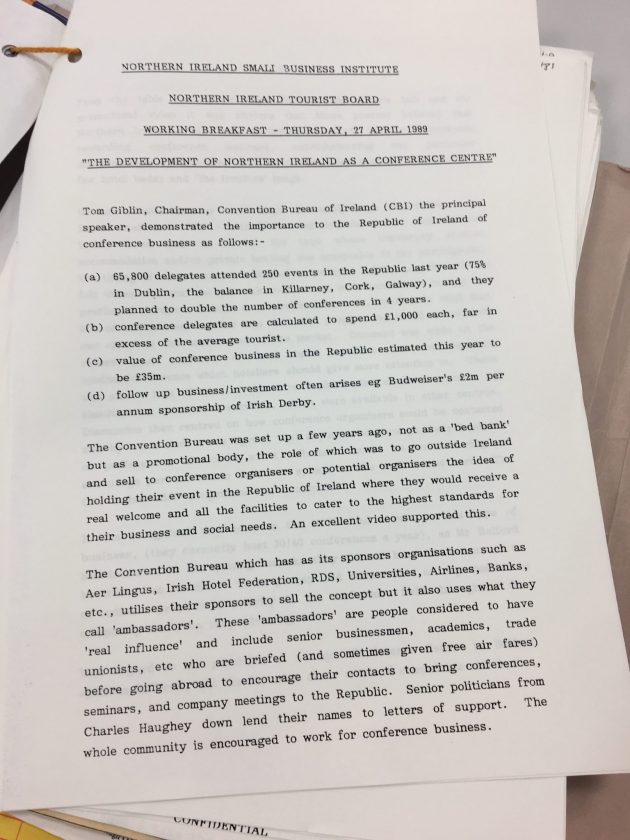 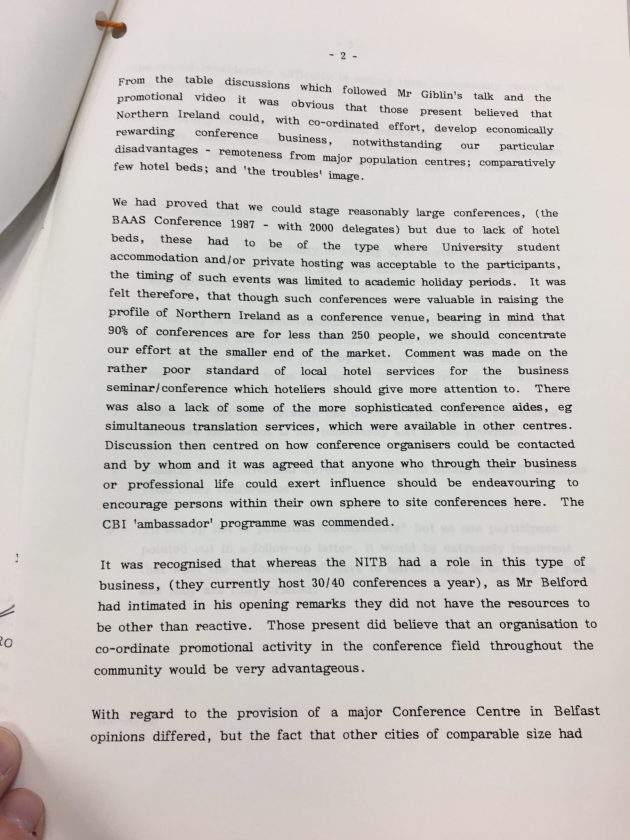 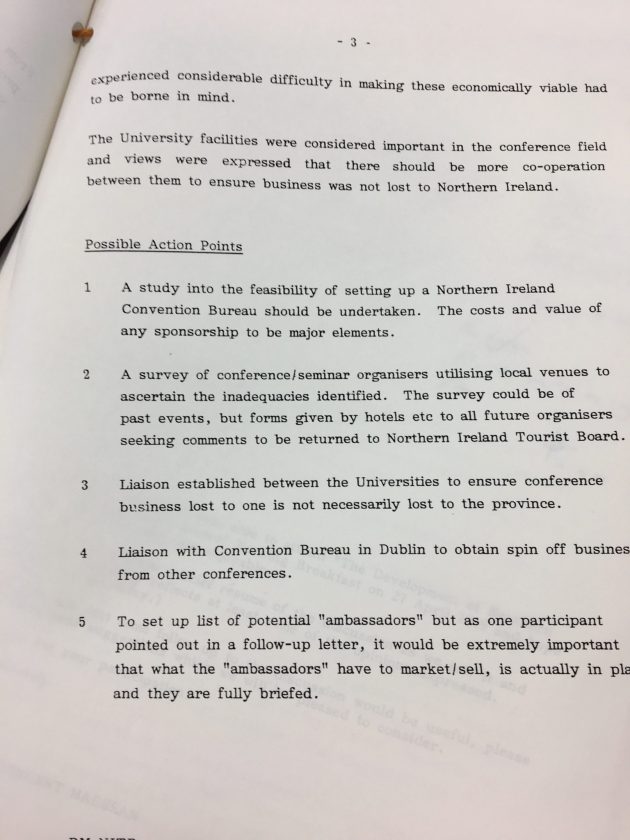