Leo Varadkar TD delivered a robust but polite lecture at Queen’s University Belfast this morning, his first public engagement in Northern Ireland in his new role as Taoiseach.

The artfully crafted speech quoted local poets and Winston Churchill as well as ending with a positive story that echoed something he’d recently heard Jeffrey Donaldson say in Dublin.

This was not a speech that intended to be divisive. It offered a partial policy framework, but very little in the way of absolute red lines or dogmatic solutions. However, they were definitely not the words of a political pushover. 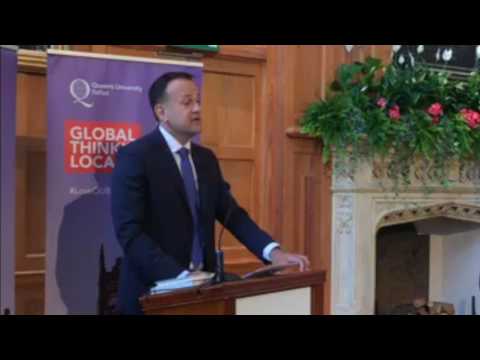 “If politics is about the art of the possible, then art is about imagining the impossible. We need both in our lives and in our society in order to achieve real progress. We need to be able to imagine the impossible, and then try to make it a reality. And we should never fear to hope for ways that may seem impossible today.”

He paid tribute to QUB’s former Vice Chancellor, Prof Patrick Johnston an referenced visiting Belfast on 1 July 2016 to lay a wreath at the Belfast Cenotaph.

“Later I wrote in the Irish Independent that real unity comes from respecting different traditions and values, not by trying to obliterate them. Our differences make us stronger and our diversity is our strength. That remains my view today as Taoiseach. In looking to the future, I believe we must look upon this island with fresh eyes and consider what it means to us all.”

The Taoiseach looked back at the border as it was in 1979 when he was born.

He reflected on “being European”.

“I passionately believe that being European is an essential part of the modern Irish identity, an enhancement not a dilution of who we are. In my opinion, it is a tragedy of the Brexit debate that it appears that this common European identity is not valued by everyone on these islands.

“This is a strength, not a weakness; an opportunity, not a threat. It is something we should embrace about ourselves and about others, not something we should see as an impurity or a means of exclusion. It is at the very heart of the Good Friday Agreement – the right of the people of Northern Ireland to be British, or Irish, or both. And, of course, the right to be European.”

Remarking on the “competing identities, competing cultures, even competing histories” that are “used to define ourselves and to define our neighbours” he cited the former British Prime Minister, Winston Churchill:

“To cling to what Churchill memorably described – a century ago – as the integrity of our quarrel. We should remember that Churchill believed we needed to walk together in mutual comprehension.”

Borrowing Michel Barnier’s phrase that “the clock is ticking”, the Irish Taoiseach said that “the challenge in our generation is Brexit”.

“Every single aspect of life in Northern Ireland could be affected by the outcome – jobs and the economy, the border, citizens rights, cross border workers, travel, trade, agriculture, energy, fisheries, aviation, EU funding, tourism, public services, the list goes on.

“In October, I will sit around the European Council table with 26 other Prime Ministers and we will decide together whether sufficient progress has been made on three key issues to allow the Brexit negotiations to proceed to the next phase.

“Those three key issues are citizens’ rights, the financial settlement and issues relating to Ireland. It will be a historic meeting for this island. It is my fervent hope that progress will have been made, but I do not underestimate the challenges we face.

“For our part, the Irish Government will discharge our responsibilities as co-guarantors of the Good Friday Agreement. We will do all we can, in Brussels, in London and in Dublin, to achieve the best outcome for everyone on this island – to protect our peace, our freedom, our rights, and our prosperity.”

Varadkar said that he shared a common view with the First Ministers in Scotland and in Wales in favouring the UK remaining in the single market and a customs union. However he asked:

“It will come as no surprise to anyone here that I do not want there to be an economic border on our island nor do I want one between Ireland and Britain. By economic border, I am not talking about currency or variation in tax rates. I am talking about a barrier to free trade and commerce.

1. Recognition of the unique circumstances of Northern Ireland, bearing in mind its geography and history;

2. Ensuring that the treaties and agreements between Ireland and the UK are fully taken into account;

3. Protecting the free movement of people, goods, capital and services, and

4. Maintaining the economic and social benefits of co-operation.”

He challenged advocates of a “hard Brexit” (which he characterised as people who “people who do want a border, a trade border between the United Kingdom and the European Union and therefore a border between Ireland and Britain and a border across this island”).

“I believe the onus should be on them to come up with proposals for such a border and to convince us and convince you; citizens, students, academics, farmers, business people that it’s in your interest to have these new barriers to commerce and trade.

“They’ve already had fourteen months to do so. If they cannot, and I believe they cannot, we can then talk meaningfully about solutions that might work for all of us.”

He threw into the air the idea that since there is already an EU-Turkey customs union, “perhaps there can be an EU-UK customs union”.

“If the UK does not want to stay in the Single Market, perhaps it could enter into a deep Free Trade Agreement with the EU and rejoin EFTA of which it was a member prior to accession.

“And if this cannot be agreed now, then perhaps we can have a transition period during which the UK stays in the single market and customs union while these things are worked out. This is the space in which agreements are made.”

While “these are the practical solutions I am proposing” he added that “these solutions will not be offered, they will have to be asked for” after sufficient progress is made on an “agreement on the financial settlement, protecting citizens’ rights and key issues relating to Ireland such as the Common Travel Area”.

As well as north-south cooperation over health provision, Varadkar mentioned the Rugby World Cup bid for 2023. He would prefer not to travel alone to the bid meeting in London in September.

The penultimate section of his speech outlined some of the projects that are likely to be in “our ambitious multi-annual 10-year capital plan to be finalised by the end of 2017”.

“We remain committed to contributing £75 million to the construction of the A5.”

He listed for “consideration” some political carrots.

But time was of the essence.

“The House of Commons, whose approval will be needed for any new deal, is due to rise for the party conference season in just over 6 weeks time. That crucial European Council meeting will take place just 10 weeks from now. We need to hear the voice of those elected representatives here in the North.

“We need the Executive, the Assembly, the North South Ministerial Council and the British Irish Council up and running and acting in the interests of our peoples. We need that more than ever, and we need it now.”

He finished by referencing the DUP MP for Lagan Valley who has been much sought after in the media this week for comment on Leo Varadkar and Simon Coveney’s comments about the border.

“In July Sir Jeffrey Donaldson joined with the Irish embassy in Britain to pay tribute to Willie Redmond MP, who was killed fighting at Messines. Over the years he has liked to quote a line from one of Willie’s letters and it is one that has really resonated with me. It was in a letter to Sir Arthur Conan Doyle, the creator of Sherlock Holmes.

“Written shortly before he died, Willie Redmond said that: ‘It would be a fine memorial to the men who have died if we could over their graves build up a bridge between the north and south.’

“I believe we should all honour his words today. At a time when Brexit threatens to drive a wedge between north and south we need to build more bridges and fewer borders. I promise I will play my part in helping to do exactly that.”