The Irish Times for which he once wrote and even more significantly the Jewish Council of Ireland have mounted a limited  defence of  Kevin Myers. As I labelled him a disgrace for the bonkers claim that two BBC presenters won bigger contracts because they were Jewish, I’m very happy to carry here the case for Kevin warts and all, such as it can be made. There is indeed more to him than this but it’s a pretty  unsightly wart.

The problem in making a judgement is that  the full offending article was deleted and we had to go on quotes from other papers. However those quotations have not been labelled as distorting the original. The claim that he has been a Holocaust denier remains  but any verdict on it encounters the same problem of  deletion – even more  seriously in my view.

Branding Kevin Myers as either an anti-Semite or a Holocaust denier was “an absolute distortion of the facts”, according to the Jewish Representative Council of Ireland.

The council, which speaks for the 2,557-strong Irish Jewish Community, came to the sacked columnist’s defence on Monday night and accused his critics abroad of circulating falsehoods about the columnist.

“More than any other Irish journalist,” said the council in a statement, “he has written columns about details of the Holocaust over the last three decades that would not otherwise have been known by a substantial Irish audience.

“The knee-jerk responses from those outside Ireland appear to care little for facts and pass on (along with some media outlets) falsehoods about his previous writings without verification. This has been exacerbated by a thoroughly misleading headline being sent around the world that is wholly unrepresentative of the article to which it refers.”

While it was “understandable” there was a strong reaction and rejection of Myers’ column in the Irish edition of the Sunday Times, “it is wrong that misconceptions and misinformation be circulated about his previous writings”.

The statement continued: “Kevin Myers inadvertently stumbled into an anti-Semitic trope. Yes, Kevin ought to have known that his bringing the religion of the two BBC presenters into his writings on Sunday would cause concern and upset and that it was both unnecessary and bound to be misunderstood.

“But the larger picture is that Kevin, who up until now was a respected columnist, has a particular curmudgeonly, cranky, idiosyncratic style. We, who have been reading Kevin’s work over many years and those who know him personally, know that while this was a real error of judgement on his part, also know that he is not an anti-Semite.”

The council said Ireland had become more diverse and Myers’ voice was part of that diversity. “It would be a shame if Kevin Myers’ voice was lost based on his mistake and other people’s misconceptions about his prior writings.”

Earlier on Monday, both the Taoiseach and the Tánaiste said the Sunday Times made the correct decision by issuing an apology for the newspaper column and subsequently dismissing Myers.

Leo Varadkar described the article as “misogynistic” and “anti-Semitic”, while Frances Fitzgerald said there was “an onus on everyone, including the media obviously, to make sure articles like that do not appear”.

Meanwhile, as commentary raged over Myers’ comments and his sacking, the Press Council of Ireland was bracing itself for a large number of complaints over it. The council has so far received five complaints about it – four related to allegations of anti-Semitism and one to an allegation of misogyny.

However, a spokesman for the council said it expects this number to rise significantly as those complaining in the UK are being advised by the Press Ombudsman there to make their complaints in Ireland as the article complained of was published in the Irish edition of the British newspaper.

When he left The Irish Times in May 2006 Kevin Myers’ departure was marked by sundry letters of unseemly joy. One read: “Free at last! Free at last! Thank God Almighty, we are free at last! . . .”

A more restrained reader wrote: “Please allow me to express my joy at the departure of Kevin Myers from your newspaper.”

But another probably hit a more accurate note: “Who else is going to horrify and humour me in equal measure? Since his departure I have become a more placid person. Other journalists don’t seem to provoke me to the point of rage the way An Irishman’s Diary did. I miss him.

None of which excuses some subsequent errors of judgement on his part, the latest of which led to last weekend’s sacking by The Sunday Times (which has no connection to this newspaper). But he is more than the sum of those errors. Much more.

As I reported yesterday, British including  British Jewish  reaction was uniformly condemnatory. Another problem not addressed was Kevin’s  alleged Holocaust denial of 2009, referred to briefly in  yesterday’s Observer  report:

Myers has previously written in the Irish Independent: “There was no holocaust (or Holocaust, as my computer software insists) and six million Jews were not murdered by the Third Reich. These two statements of mine are irrefutable truths.”

But when I tried to find it, it too had been deleted.

The Indo Kevin also writes for has kept its head down so far, sticking to straight reporting of the controversy.  But its report states:

The controversy, however, did not stop Mr Myers from appearing in a panel discussion yesterday at the inaugural West Cork History Festival in Clonakilty.

He was a panellist discussing the commemoration of Irish soldiers who fought in World War I.

Among his co-panellists was Rabbi Julia Neuberger, one of the first women in the UK to become a rabbi.

Rabbi Neuberger, who is a senior rabbi at the West London Synagogue, is also a member of the House of Lords and a high-profile writer and commentator.

Meanwhile, an article by Mr Myers published in the ‘Irish Independent’ on March 4, 2009, is no longer available online as it does not comply with our editorial ethos.

The article on the Holocaust was removed on July 30, 2017 after its existence was brought to our attention.

“Brought to our attention!”  But it appeared in your own paper, guys. Shouldn’t you have noticed it at the time?

As more than one press inquiry is proceeding on both sides of the water, Kevin Myers will probably hold fire until they open and he is asked to explain.    The sooner the better.

Roy Greenslade, doyen of media commentators and declared Sinn Fein supporter  has several interesting tweets. Why did it take the Indo so long to delete it – and pass it in the first place if it was as claimed? Greenslade  has managed to capture an image of the Holocaust denial column now deleted It looks like a more  than usually acute example of Myers    provocation. 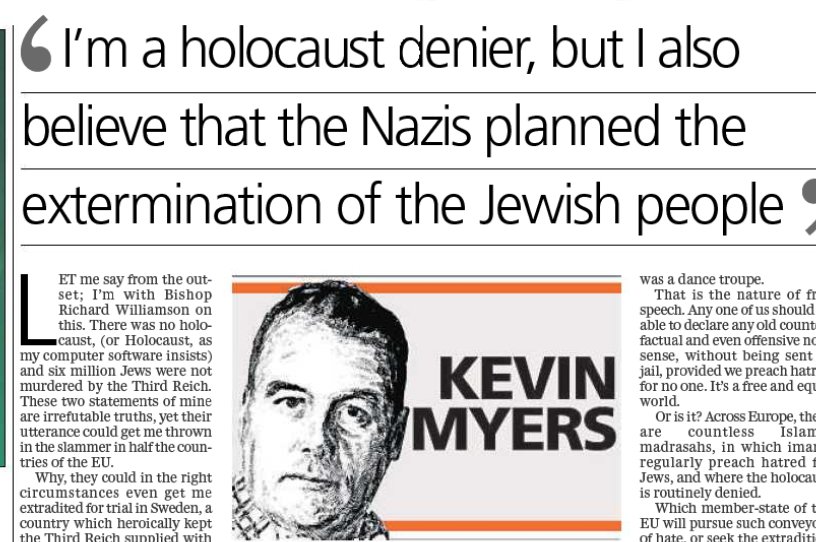