Dominique Searle transported the Armagh audience attending this morning’s John Hewitt International Summer School down to the 6.7 square kilometre ‘rock’ on the southern end of the Iberian Peninsula, jutting out into the Strait of Gibraltar and home to just over 32,000 residents.

While Northern Ireland often reminds anyone who will listen that it is the only part of the United Kingdom with a land border with the European Union, Gibraltar – a British Overseas Territory – has some experience of this too with its border with Spain. 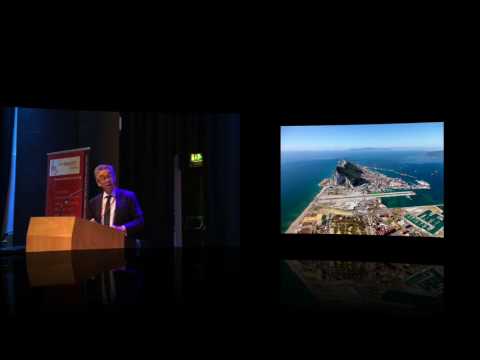 In the June 2016 referendum, Gibraltar voted 96% in favour of remaining as part of the EU.

An efficient border is of enormous importance to the population: psychologically. economically and politically. Adding a few seconds to the time it takes each car to transit the border crossing could be enough to create long queues. That’s not good for day-to-day life, never mind not good to keep attracting the 7-11 million annual tourists.

It’s only a matter of a few years since 2013 a dispute over the creation of an artificial reef (to protect fish stock from Spanish fishermen) resulted in Spanish action and 10 hour delays at the sweltering hot border. And plenty of residents remember the border being completely closed in 1969 and only reopened between 1982 and 1985.

Dominique Searle worked for the Gibraltar Chronicle newspaper for thirty years, editing it for twenty, before becoming a special advisor to the government and most recently becoming the Gibraltar Representative to the UK. He spoke this morning at the session supported by The Centre for Cross Border Studies in a personal capacity. He describes ‘Gib’ as historically being much more multicultural than its Spanish neighbour.

The 1969 constitution devolved specific powers to Gibraltar, leaving the rest with the UK. The 2006 constitution reversed this and deployed a ‘devo max’ model.

If Gibraltar has an advantage over Northern Ireland, it is the lack of societal conflict within the territory. Madrid is the enemy (and not those living just over the border in La Línea). Searle described the government, commerce and unions coming together as ‘a tribe’ to resolve problems.

The price differentials on either side of the fence means that there is already a small black economy with goods (including tobacco) smuggled across the border.

Gibraltar’s biggest marker is the UK. Dominique says that a ‘difficult’ Brexit could leave it needing to make up 10% of its income. However, he predicts that the population’s long-established siege mentality will overcome

While Gibraltar doesn’t provide a ready model for Northern Ireland to follow, it is similarly far down the pecking order in London’s Brexit negotiating. Its has learned many lessons that may have to be applied locally: the efficiency of border crossings, the effect of differential pricing on consumers, and not least the need to sometimes take the UK government to court to get your way.