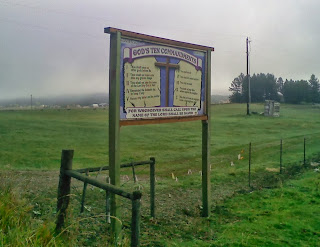 One thing that I see a lot of in America is signs. Advertising billboards are everywhere, a lot more than in Europe. Drive for any distance in a populated area in the US and you’ll see hundreds.

However, there’s one particular type of sign that I see a lot of in my area and it’s not (technically, anyway) an advertisement.

They’re all the same design and are available from a website (which is also advertised on the sign itself), http://www.gods10.com/. I jogged over to the site, which states that their mission is ‘helping churches ‘in each state in the United States to establish God’s Word in a visual manner.’

They’re certainly succeeding in my area; On the 20-mile drive from Bigfork to Kalispell, I counted nine of them. That puts even McDonalds to shame.

Now, my doctorate is in Theology, so I’m always interested in where and how the biblical text is used publicly or politically. In a country as publicly religious as the US, there’s a lot to think about. So, I decided to pick this apart a bit…

My initial question was, why the Ten Commandments? Why display them and not some other biblical text?

The website doesn’t say, but my expertise leads me to think that the website is an extension of a tendency within Evangelicalism toward public witness, as well their desire to ‘reclaim’ public space for God. Basically, the conservative wing of Evangelicalism (the movement is actually quite diverse) believes that, regardless of the First Amendment’s prohibition against the establishment of religion by the government, America has a specific, definitive Christian foundation that other religions and unbelievers are actively seeking to erode.

Therefore, to them, the First Amendment has become, not a protection of religious liberty, but a hindrance to it. The visible diversification of American public life, with many faiths seeking a more equitable and diverse public face to religious expression- not to mention those within American society who wish to have as little public religious display as possible- are seen as anti-Christian, ‘un-American’- basically a threat.

The argument conservative Evangelicals make is that the Ten Commandments are the foundation of all law and ethics, and therefore an essential part of secular law; publicly posting them- in schools, in courthouses, in town squares- is not a religious act but a secular one. It’s not ‘establishing religion’, merely re-asserting a lost historical understanding of America’s Christian underpinning.

Needless to say, that argument holds no water for those who see the First Amendment as a key protection against a tendency to establish any one religious idea as preferable to any other.

What can be seen here is that these arguments are as much about divergent understandings of American history as they are about divergent readings of the biblical text. By no means are all American Christians Evangelicals, and by no means are they all excited or even comfortable with the idea of getting the Ten Commandments here, there, and everywhere.

I think an obvious follow-up question is, why not something from Jesus?

That was certainly the opinion of American author Kurt Vonnegut who, near the end of his life, wrote:

For some reason, the most vocal Christians among us never mention the Beatitudes, but often with tears in their eyes, they demand the Ten Commandments be posted in public buildings. And of course that’s Moses, not Jesus. I’ve haven’t heard any of them demand that the Sermon on the Mount- the Beatitudes- be posted anywhere. ‘Blessed are the peacemakers’ in the Pentagon? ‘Blessed are the merciful’ in a courtroom? Give me a break…

It’s a fair point, even if Vonnegut ignores- or was ignorant of- the Evangelical belief that the biblical text is a unified whole. But his point about the absence of Jesus from much of the rhetoric regarding public display of the biblical text is one worth dwelling on.

Jesus does get a mention in a couple of the signs available from the website, but always in a corner or along the bottom, not in the main body. There is John 3:16 on one, which is no surprise. John 14:6 (‘I am the way the truth and the life; no one comes to the Father but by me’) is also fairly unsurprising. One includes Matthew 5:17 (‘don’t think I have come to destroy the law… I have not come to destroy the law but to fulfil it’), which I guess is their way of building a link between Jesus and the Commandments. They get even more explicit with the quoting of John 14:15 (‘if you love me, keep my commandments’).

However, this then raises the question: what are the commandments of Jesus? As a Jew, Jesus obviously would have known the Commandments; the problem for the ‘God’s 10’ crowd is that Jesus almost never mentions them.

The only account we have of Jesus even mentioning the Ten Commandments is in Mark 10, when a rich young official inquires of Jesus how to attain perfection. Jesus reiterates the Commandments (‘you know what the commandments say: “Do not commit murder. Do not commit adultery. Do not steal. Do not give false witness. Do not cheat. Honor your father and mother”’). The young man presses Jesus (‘I have obeyed all those commandments since I was a boy’). The text says that Jesus ‘looked at him and loved him’. ‘You are missing one thing,’ he said. ‘Go and sell everything you have. Give the money to those who are poor. You will have treasure in heaven. Then come and follow me.’ At this, the text says, ‘the man’s face fell. He went away sad, because he was very rich’, to which Jesus declares to his disciples, ‘How hard it is for rich people to enter God’s kingdom!’

What the text suggests is that Jesus believed that the issue wasn’t in keeping, declaring, or publicly displaying the law; he places emphasis in living a new law: the law of love- love of God and one’s poor neighbours.

That’s the point that I think the people behind these ‘God’s 10’ signs completely miss. The Gospels suggest that the central message of Jesus- the love of God for humanity and love of each person for their neighbour- was not merely a quick addition to the Ten Commandments. It was understood by those hearing it to be something very new, very different.

But let’s be honest: The ‘God’s 10’ people can’t publicly display signs that quote Jesus saying ‘Go and sell everything you have. Give the money to those who are poor. You will have treasure in heaven. Then follow me’. The very idea- even in America, where many Christians are at pains to declare how ‘Christ-centered’ their nation is- is ludicrous.

The fact that they wouldn’t put up that kind of I think sign shows that the actual person of Jesus as he’s presented in the Gospels is deeply problematic for many Christians- particularly American conservative Evangelical Christians. They dare not say what Jesus said; they dare not do what Jesus did.

Still, it would be fun to make up some ‘sell everything you have’ signs, post them around, and see what happens…

Jon Hatch is a theologian, educator, and post-conflict expert. He blogs at http://reflectionsforthursdays.blogspot.com/