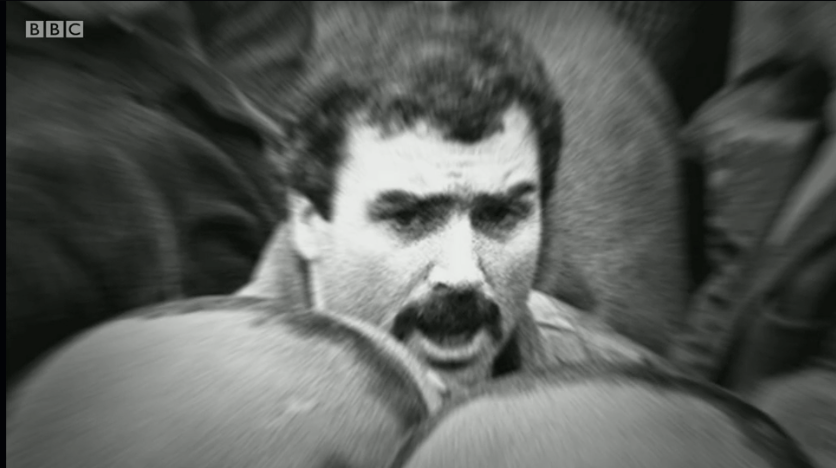 Ed Moloney has produced a puzzling critique (“Did Panorama Pull Its Punches?”) of my recent programme on the army agent StakeKnife (aka Freddie Scappaticci) to which your site recently drew attention.

He noted that I had made no mention of Scappaticci’s first handler Peter Jones, an army sergeant said to have recruited him. The reason is straightforward. Despite my best efforts, Jones refused to discuss Scappaticci with me.

Ed said he found an account by ex NI GoC General Sir John Wilsey about how Jones recruited Scappaticci to be “more credible than the version presented by Panorama reporter John Ware, which was that the RUC Fraud Squad initially had Scappaticci on their books but then handed him over to the British Army. Really?”

My actual words were that Scappaticci “graduated from being an informer for the Police fraud squad… to a paid agent with military intelligence” – nothing about him being “handed over” by the RUC to the army.

He was initially an informer for the police because they’d caught him in a VAT fraud. When it comes to General Wilsey’s account as to how Jones recruited Scappaticci, I am a little more sceptical than Ed.

In his book “Ulster Tales” the General invites us to believe that in the 1970s Sgt. Jones was “sinking pints until the early hours” in “the clubs and bars frequented by republicans” and that Jones was so adept at being a “chatter-upper” that “Kerbstone” (Wilsey’s fictionalised name for StakeKnife) had “no reason to suspect” he ”was in the security forces, still less a soldier on duty.”

The notion of a British-accented soldier frequenting at will republican clubs in the 1970s (unless able to give a plausible account of himself) does not ring true, still less when his drinking companion was a member of the IRA’s internal security unit whose task was to prevent penetration of the IRA by British agents and informers.

There’s clear evidence of Scappaticci having joined the security unit before he was recruited by military intelligence.

The General nonetheless says that the combination of Jones forging a relationship with Scappaticci and the latter being “unsympathetic to the aims and methods of the Provisional IRA” resulted in Jones “hooking and landing his fish”.

Scappaticci “unsympathetic to the IRA’s methods?” That doesn’t ring true either.

Having talked to many within the IRA who knew and sometimes worked with Scappaticci and some within the intelligence community who knew him and his intelligence product, I suspect his readiness to be “hooked” by the army had more to do with his large ego and his need to be at the centre of events.

That ego is presumably what saw him through more than a decade of Nutting Squad bloodshed in which – according to the Northern Ireland DPP Barra McGrory QC – he was linked to at least eighteen murders.

Ed refers to what he described as the programme’s “glaring hole” – the idea that three prime ministers Jim Callaghan, Margaret Thatcher and John Major must have “given the green light” to Scappaticci’s handlers to allow him to kill fellow agents in his role as a member of the IRA’s Internal Security Unit aka the Nutting Squad.

This is based on Ed’s purely speculative assertion, namely that “Scappaticci’s activities would have to be discussed by the British Cabinet’s Joint Intelligence Committee (JIC), whose deliberations and conclusions – and formulations of rules governing intelligence operations – are shared and endorsed by the British prime minister of the day.”

Let’s take Callaghan. Ed says Scappaticci “began spying for the British in 1976.” I am told that Scappaticci was not, in fact, recruited by the army until September 1979 – four months after Callaghan ceased to be prime minister.

He implicates John Major because Scappaticci “left the Internal Security Unit circa 1992/93.” This is true – and Major had been prime minister since November 1990.

However, by November 1990, Scappaticci had been on the run for nine months living outside Dublin after his thumbprint had been found on a battery at 124 Carrigart Avenue, Lenadoon, where he had falsely imprisoned the police agent Sandy Lynch in January 1990.

Scappaticci had wrung a confession from Lynch on a Saturday. On the Sunday morning, Scappaticci was informed by the IRA that a decision had been taken to execute Lynch after dark that evening. Scappaticci then informed his army handlers. Lynch was rescued by the police that evening.

Having cooked up a false alibi for his thumbprint, Scappaticci returned to Belfast in the autumn on 1992. Thereafter I understand he was removed from the IRA’s Internal Security Unit because questions had been raised about his role in Lynch’s rescue.

That leaves Mrs Thatcher. Ed directly implicates her in Scappaticci’s murderous Nutting Squad activity because, according to him “it is simply inconceivable that the JIC (Joint Intelligence Committee) did not know all there was to know about Steak Knife” and since the JIC’s job is to advise prime ministers on policy, Mrs Thatcher must have known.

In fact, according to Ed “the final decision” about “how to best utilise” Scappaticci’s “skills….would be made by the prime minister of the day.” In other words, Mrs Thatcher.

I know that to republicans and many nationalists Mrs Thatcher is the bete noir of the conflict. But I can’t see what purpose is served by following a pack narrative just because that’s how they might want the evidence to fall.

So dealing with the evidence to date of what Mrs Thatcher did or did not know, as I understand it the JIC focused primarily on the terrorist threat in Britain (as opposed to Northern Ireland) and in continental Europe.

Second, the names of agents and even their precise location in IRA or loyalist groups was not something that was shared with ministers – for two reasons:

a) there was no need for ministers to know, and

b) ministers didn’t want to know.

The reason ministers didn’t want to know was because they knew that getting operational intelligence from within the IRA or loyalist groups necessarily involved those agents getting blood on their hands, sometimes to the point of murder.

Ministers seem to have preferred the intelligence services in Belfast rather than ministers and mandarins in Whitehall carry the can for any such illegality.

Attempts by the RUC and MI5 from the late 1980s to draw up a legal framework by which to run agents, foundered.

All the wet towels in the world wrapped round the heads of government legal draftsmen failed to inspire them to find a way of making legal what was manifestly illegal. Which is not surprising. Murder is murder is murder.

Despairing of one of the many failed attempts to draft a workable and also lawful set of agent running guidelines, in August 1992 the Solicitor General wrote:

“… the thrust of para[graph] 4 appears to be ‘Don’t get caught’! This is unpromising territory for Ministerial approval.”

Scappaticci was run by the army’s Force Research Unit, or FRU. Which minister knew what about the identity, action and positioning within republican and loyalist groups of individual agents (including FRU agents) was covered by the human rights barrister Sir Desmond de Silva QC in his 2012 review of the murder of Pat Finucane and the FRU agent Brian Nelson’s role in it.

As with the assertion that Mrs Thatcher “must have” sanctioned Scappaticci’s role in the “execution” of fellow agents, so others have asserted she “must have” also sanctioned the murder of Pat Finucane because Nelson who helped target Finucane was also a FRU agent.

De Silva rejects this. He says he saw thousands of intelligence papers (including reports from the Joint Intelligence Committee) and communications between the Prime Minister and Cabinet Ministers.

In none of these documents did he see…

any material to suggest that Ministers became involved in decisions as to the extent to which specific agents should become involved in criminal conspiracies, or whether threat intelligence against a particular individual should be acted on (both of which have been key themes of this Review).

De Silva explains that these…

“….there is no evidence that Ministers sought to direct the security forces to take a relaxed or permissive approach to loyalist paramilitaries; Ministers do not appear to have been aware of Brian Nelson’s targeting activities prior to September 1990; and there is no evidence that Ministers had any foreknowledge of the murder of Patrick Finucane, nor that Ministers were subsequently provided with any intelligence briefing suggesting that the intelligence agencies had foreknowledge of a threat to Mr Finucane’s life.”

I appreciate there must always be the possibility that what De Silva has had to say may exceptionally not have applied to StakeKnife.

On the other hand, it is similar fact evidence inasmuch as both StakeKnife and Nelson were FRU agents, and what De Silva addresses are the principles governing the extent of what ministers, including the prime minister, knew about what exactly they did and how they were run.

I know also that what De Silva has had to say about this has been greeted by some with wide-eyed scepticism. It may yet prove not to be the definitive version of who in government knew what and when about what StakeKnife was up to. But those are the facts to date.

Had I facts to gainsay them, I would have been the first to report them. But I don’t have them (yet) and nor (yet) does Ed Moloney.

Where does all this leave Northern Ireland?

John Ware is now a freelance journalist who has reported from Northern Ireland since 1974. His investigative work on the conflict for World In Action and BBC Panorama won four Royal Television Society Awards. In 2004 he won the James Cameroon Prize for “work as a journalist that combined moral vision and professional integrity.