Some useful thoughts here from Northern Ireland’s one man think tank, Newton Emerson, on the business of how the UUP and SDLP might provide a credible challenge to the new establishment parties of the DUP and Sinn Fein:

What really stops the UUP and SDLP offering an alternative is that a Stormont executive must be led by the largest nationalist and unionist parties and there is no guarantee of the “moderates” leading both blocs.

If the requirement instead was for the largest nationalist and unionist coalition to lead the executive, choice could be offered and power-sharing preserved.

This would undoubtedly be portrayed by Sinn Féin and the DUP as an outrageous change to the Belfast Agreement. In fact, it would be closer to the original rules under that deal.

David Trimble, for example, would have been first minister even if the UUP had fewer seats than the SDLP, as long as unionism still had more seats overall.

Sinn Féin and the DUP had this rule changed after the 2006 St Andrew’s agreement, turning party size into a tribal competition. The DUP also wanted unionist and nationalist designations to be declared on ballot papers, rather than at the first sitting of the assembly.

In other words, pre-election co-ordination could be facilitated as long as it benefitted hardliners. [Emphasis added]

This collapse (and all the strokes and mini strokes of the foregoing ten years) indicates that this post-St Andrews ‘arrangement’ (it was privately agreed afterwards) seems only to encourage a stoking of fear or loathing of the other, precluding any real working together once in post.

It’s a huge flaw, which many who are much closer to the arena appear not to have really noticed. For me (though I’m biased since I was in it) Jennifer O’Leary’s Spotlight programme sets all of these issues in their proper context: 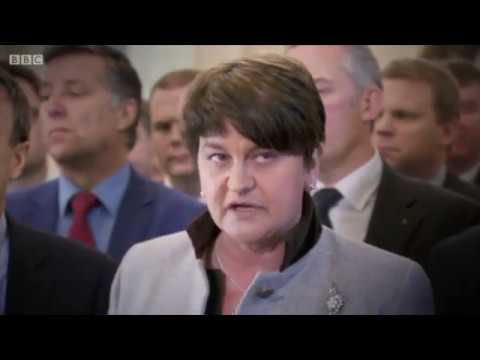 O’Leary defines Emerson’s point further “the First and deputy First Ministers were originally elected by all MLAs, but under a change in the St Andrews Agreement they are now nominated separately by the largest and second largest parties”.

This identifies not simply the degree to which these parties were structurally sidelined, but how fragile the relationship proved when after just seven months of probing by a massively under-resourced Opposition the whole sham operation fell apart.

The key benefits of the St Andrews Agreement (such as getting SF to recognise the PSNI, devolution of Policing and Justice, etc) were real but largely transitional and therefore will not be undone by any post-election revisiting of these highly limiting terms.

The British-Irish Agreement is the internationally binding foundational document, not St Andrews, with the focus on setting the peace. It did not envisage such an enabling of tribal fear and loathing, but nor did it, strictly speaking, seek to prevent it.

Much was left to vagaries of goodwill with achingly little thought given to the matter of accountability.

This continual failure of Strand One is primarily an issue for the parties in Northern Ireland. It’s the beating heart of that international agreement. But if it fails (eg, a Minister having to sue an Executive colleague just to get her to share departmental information) then all strands fail.

Sinn Féin is now running to London again, demanding that changes to the status quo be imposed over the DUP’s head. If such a thing is possible, could the centre parties not agree some proposals of their own?

Why not? They could hardly do much worse than the current profoundly unstable stitch up?