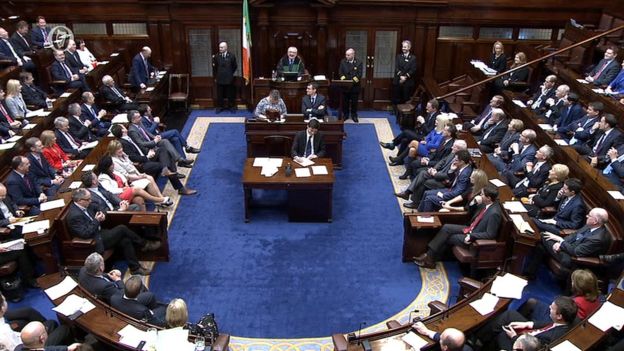 It’s a bit of a red letter day when Slugger gets read into the record of any of our legislatures. So far we’ve made it into the Seanad, and the House of Lords, now we’re in the official record of the proceedings in Dáil Éireann. This snippet (and it’s exchanges) is worth sharing:

Deputy Brendan Howlin: The people of Northern Ireland voted to remain part of the European Union. The largest nationalist party in Northern Ireland, Sinn Féin, failed to register for the Brexit campaign with the United Kingdom Electoral Commission. According to Mick Fealty registering with the Electoral Commission allows a party or an individual to become a registered campaigner and to spend more than £10,000 on referendum campaigning during the election period. That the largest nationalist party in Northern Ireland decided it did not want to spend more than £10,000 on the campaign indicates that it did not take the campaign seriously. It was taken for granted.

Deputy Dessie Ellis: We won it.

Deputy Maurice Quinlivan: What campaign did the Labour Party run?

Deputy Brendan Howlin: I have looked at the register. Every political entity, including all the tiny parties all over the United Kingdom, registered because they wanted to spend more than £10,000 on their campaigns because this was such an important issue. It is remarkable that Sinn Féin did not do that. Registration not only allowed parties to spend money, it allowed them access to polling stations and so on.

The net effect of Sinn Fein’s bargain basement ‘win‘ was to depress turnout: including West Belfast which had the lowest turnout of any constituency in the UK. For the DUP (who did actually win) it was a very different matter, regarding which more later this morning.