“What theatre should be – critical and a little bit political”

That’s a quote from one of the audience members at the close of last night’s première of Entitled, a play written about the impact of welfare reform on people in Northern Ireland. Fionnuala Kennedy‘s new play for MACHA Productions is centred around a single parent Erin who bumps up against the inflexible, hard-to-navigate welfare system when she loses her job. After each performance, an expert from the sector or a local politician/political candidate addresses the audience before a referendum. Last night’s audience voted on whether welfare reform disproportionately impacts women. They unanimously agreed with the arguments of WOMEN’STEC‘s chief executive Lynn Carvill* who had reminded them:

“Cumulatively in the period between 2010 and 2020, 86% of savings from tax and benefit measures will come from the pockets of women. In the UK one fifth of women’s income is made up of benefits/tax credits compared with one tenth of male earnings.”

Based on near verbatim accounts from public interviews, the cast throws light on the roles of benefits staff, elected representatives, medical professionals and charitable food banks in the welfare system and its recent reforms. The play starts with an extract from the report of the Welfare Reform Mitigations Working Group that was chaired by Eileen Evanson. How much difference do the welfare reform mitigations make on the ground? How fair are the processes? How do politicians square up their talk about equality and adoration of figures like Winifred Carney with the legacy of welfare reform in Northern Ireland? 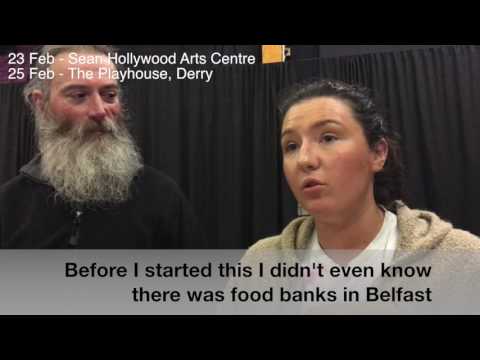 Ticket prices have deliberately been kept low (£8-10) – with a special half price ticket deal (£5)  for groups – to encourage communities affected by the welfare reforms to attend. Entitled runs in The MAC until Saturday 18 February, before embarking on a tour of SPACE, Bangor (21st), Sean Hollywood Arts Centre, Newry (23rd) and The Playhouse, Derry (25th). Over the next few performances, Alex Attwood, Ellen Murray and Gerry Carroll will pop up to address the audience, along with representatives from the Law Centre NI and PPR. They’ll talk about their attitudes towards welfare reform and their plans to combat the impacts of these cuts, before the audience vote on that day’s referendum question.

Writer and co-founder of MACHA Productions Fionnuala Kennedy said: “We’ve created a new piece of theatre to try to show the desperation facing people who are impacted by these cuts that are designed to propel people into extreme poverty and difficulty.”

The narrative from the NI Executive is that “Northern Ireland got a better deal than the rest of the UK”. But that isn’t what the team behind Entitled heard when they spoke to workers in the social sector and people on the street. Some weren’t yet aware of how their benefits would change. Others had received letters about the bedroom tax that’s not even supposed to affect Northern Ireland.

Fionnuala is no stranger to theatre that tackles social injustice, having previous written work that encompassed homelessness, racism and homophobia. She explained: “We’ve interviewed people whose benefits will be affected and the terrifying thing is that they aren’t aware how or when or how. People are lost. This causes not only hardship but distress at an already difficult time.”

“We want to use this piece of theatre to challenge our politicians about what they plan to do. It is our argument that the so-called welfare reform mitigations are not enough, that it is not acceptable for us to pat ourselves on the back because less people will suffer than in the UK. We want to encourage everyone to hold their politicians to account by using their voices and their votes.”

Advice NI will be present to offer independent advice before and after the performances. Kevin Higgins is head of policy at Advice NI and was part of the Welfare Reform Mitigations Working Group. He said:

“Welfare reform continues to create a great deal of uncertainty and anxiety for many across Northern Ireland. We need to understand more about the realities of life for people struggling on social security and we need to understand the profound impact of the welfare changes including harsher benefit sanctions, the reassessment of disability benefits and the freeze in benefit rates on households across Northern Ireland.”

Kevin added: “It is hoped that the free Independent Welfare Changes Helpline (0808 802 0020) will go some way to making the changes to the system less frightening and more manageable for those affected.”

Cast members Bernadette Brown (The People of Gallagher Street), Caroline Curran (50 Shades of Red, White & Blue) and Louise Mathews (Hostel) will be joined on stage by 12 members of MACHA Community Cast who have received a year and a half of free drama training and come from the Falls Road, Whiterock Road, Shankill Road, North Down, Derry, Dublin, New Zealand and Argentina.

Arts Council NI‘s development officer Gilly Campbell applauded the “high level of community engagement” and said it was “a terrific example of the arts being used as a useful tool in stimulating discussion around difficult subjects”.

* WOMENS’TEC is the largest quality provider of training for women in Northern Ireland who wish to return to work in non-traditional sectors and addresses the skills shortages in the construction and ICT industries. TEC stands for Training, Enterprise and Childcare: three ways in which WOMEN’STEC support women, many of whom are socially and economically disadvantaged.