To be honest I haven’t wanted to add to the wall to wall commentary on a Brexit deal, the outline of which is even now barely visible. Today, it became a little more clear. Mrs May wants access to the Single Market via a bespoke deal yet to be negotiated.

Looks like a very big reset within the unifying frame of the UK state. She made references to a report she’s already had from the Scottish Government, and is expecting another Carwyn Jones’ Labour administration.

Nothing will be forthcoming in Northern Ireland. Even in the event of there not having been a collapse, the power-sharing arrangement slapped together a half Remain/half Brexity administration would have had all the coherence of the oracle at Delphi.

However, for all this grand talk, Mrs May currently has no official means for consulting with Remain majority Northern Ireland:

I have been determined from the start that the devolved administrations should be fully engaged in this process.

That is why the government has set up a Joint Ministerial Committee on EU Negotiations, so ministers from each of the UK’s devolved administrations can contribute to the process of planning for our departure from the European Union.

We have already received a paper from the Scottish government, and look forward to receiving a paper from the Welsh government shortly. Both papers will be considered as part of this important process. We won’t agree on everything, but I look forward to working with the administrations in Scotland, Wales and Northern Ireland to deliver a Brexit that works for the whole of the United Kingdom.

And on Ireland, and the UK’s only land border with the EU/Single Market:

Indeed, it was formed before either of our 2 countries were members of the European Union. And the family ties and bonds of affection that unite our 2 countries mean that there will always be a special relationship between us.

So we will work to deliver a practical solution that allows the maintenance of the Common Travel Area with the Republic, while protecting the integrity of the United Kingdom’s immigration system.

Nobody wants to return to the borders of the past, so we will make it a priority to deliver a practical solution as soon as we can.

The interesting bit is that her pitch is to take the UK (including NI) out of the Single Market and then to renegotiate their way into some maximalist form of access to it. She doesn’t want the Norway or Swiss model, she wants one of her own.

For good measure, she also says she’s quite prepared to default to the WTO’s Most Favoured Nation status, if the EU don’t give her what she’s looking for. Despite her protestations to the contrary, that won’t be good for the UK, but it won’t be particularly flavoursome for the EU either.

It’s not likely to be kind to Ireland either. As hinted at this interview with former NI Secretary of State, Theresa Villiers on the Daily Politics today: 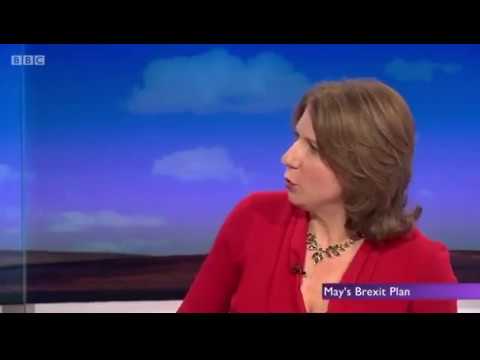 All in all, except for the dangerously unobservant there was not much new in the speech. Reassuring perhaps that Ireland came so high in the list of priorities. But there’s little sign of any serious direct input from the Civil Service.

The rhetoric is oddly similar to that of some more implausible positions of Scottish nationalists in the past:

Quite so. "We repudiated you; now let's be adults and make sure you give us everything we want." https://t.co/0sNTLN9moc

It has her Eurosceptics and the UKIP purring, the Labour party confused (again), Tim Farron gaining profile as the anti-everything she’s doing party leader, Nicola Sturgeon spitting nails, and Tory wets nailed to the floor.

Of course, it’s a big rosy picture in which all things are possible. But as General Helmuth Von Molke once actually said, “no operation extends with any certainty beyond the first encounter with the main body of the enemy.”

Northern Ireland’s lack of a voice may not last that long (they could be back at it as early as May). In any case, people ought to reflect on the fact that concern about the hardening of the border is a cross-community concern, not just a reflection of the old divisions.

And it’s a real, ie economic concern, reflected in the trade figures:

A prolonged absence would be a dereliction of democratic duty to the people of Northern Ireland. As Micheal Martin noted this evening the in Dail:

…the decision to cause an election at this moment has dramatically increased the risk of Northern Ireland, and by extension the rest of this island, suffering due to the Brexit decisions being taken now.

The decision to reject any further discussions or to find a means of at least delaying the collapse of the Executive until after this critical period is deeply damaging. The absence of an Assembly or Executive for an extended period delays rather than brings forward any inquiry into the heating scheme or the introduction of any measure to reduce its cost.

It also means that there is no Budget for 2017 and the urgently needed plan for tackling a crisis in A&E departments has been shelved.